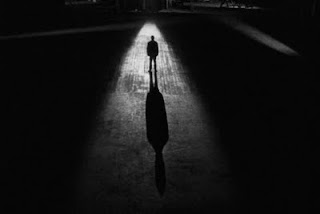 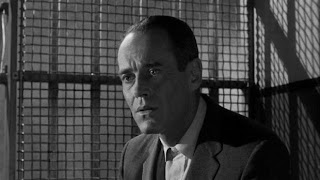 THE DARK SIDE OF THE MOON
by Douglas Messerli

It is strange to think that only two years after making one of his greatest films, Rear Window, one year before Alfred Hitchcock directed The Trouble with Harry (perhaps his most joyful film of this period), and the same year as the remake of The Man Who Knew Too Much, that the 1956 black and white film, The Wrong Man, was a dismal box office failure.

Several reasons are generally cited for this fact, the most obvious being simply that the film, based on a true story with few of the original facts altered, was simply too bleak. Moreover, in its documentary-like tone and structure, the film does not seem like a Hitchcock product. It has little of the gruesome wit and irony of most of his works, and lacks, at least superficially, the cinematographic brilliance of the other films mentioned. The director himself seems to back away from the work, appearing in a brief shot before the film begins to tell the audience the movie is based on real events, instead of appearing in a tongue-in-cheek cameo, as he usually does, within the frame of the story. Even the phenomenal composer Bernard Herrmann seems to have become more somber, certainly less flamboyant in this film—although his stunning jazz piece (Manny works as a string bass player in a jazz group performing at the Stork Club) interrupted by almost sickening moans of the instruments, is highly memorable.

To see the hard-working, good family man Manny Balestrero (intensely played by Henry Fonda) be systematically destroyed by the American justice system is so painful that it is a hard movie to watch. In some ways, The Wrong Man combines all of the fears and paranoias of the mid-1950s, a period where the whole country was, in a sense, put on trial, everyday men and women accused of anti-American sentiment and actions. Although I have often suggested that the 1950s was far more interesting than the decade is usually presented, this particular aspect of the period, along with the angst of nuclear destruction, put everyone on edge. It is little wonder, accordingly, that people did not flock to Hitchcock's dour film. Even a critic writing as late as 2004, Christopher Null, describes it as one of Hitchcock's "most forgettable works of his mature era."

Having recently watched the film again, however, I now think it, along with Shadow of a Doubt, is one of his most excellent, if frightening, depictions of American life. Films like Vertigo, North by Northwest, and even Psycho are much closer to European cinema-making than either Shadow of a Doubt or The Wrong Man, the latter of which is as grounded in the streets of New York as many of the 1940s film noir, and, as we now perceive, highly influenced artists like Scorcese in Taxi Driver.

It is not that the police in this film are villains, or that they are even particularly insensitive enforcers. Indeed the dilemma of this film is not that any group of men or women torment Manny, but that—once he has visited the local insurance office to see if he might get a loan to pay for his wife's upcoming dental bills—the whole world order crumbles, truth and memory slipping away into nightmare reality. He is identified by women of the insurance office as a man who twice before held them up, women can hardly bear to look at the accused themselves, one of them almost sickening to even glance in his direction.

The police quickly create a line-up made up of persons, among whom the women might have previously seen in uniform, as justice continues to crack, leaving Manny Balestrero to face the shattering effects upon his life.

In this world turned upside down, coincidences predominate. When asked to write the words that appeared in one of the hold-up notes, Manny makes the same spelling mistake as did the criminal, reinforcing the police's belief in his guilt. His simple statement, "I made a mistake," echoes in a Kafka-like cry of existential guilt, repeated later in his wife's fractured vision of reality that it is she who has made the mistakes by needing dental care or through simply not being a good enough wife. Even Manny's two innocent sons, mope about as if they have helped to create the mountain of evidence that appears to insure Manny's imprisonment.

Truth has little significance in this dark world. The fact that during the first robbery the couple had been away on vacation and during the second robbery Manny had a swollen cheek seems to matter little. None of his fellow vacationers can be found, some having died, others disappearing into oblivion. The young lawyer (Anthony Quayle) to whom Manny and his wife are recommended is well-meaning but inexperienced (in this instance, Hitchcock did change the facts, since originally he was a New York Senator at the time of the trial).

As his wife Rose (Vera Miles) slips into insanity, it is as if Manny, a religious believer, were suddenly suffering the trials of Job. The only bit of luck he receives, if one can call it that, is that a juror screams out early in the trail concerning the mundanity of court room details, apparently in the belief that Manny's guilt is obvious, thus assuring a retrial, and giving the defense more time to prepare.

One cannot imagine the final events to be anything but fiction, so perfectly do they fit with Hitchcock's sense of moral outrage against institutional systems and individual fate: quite by accident the head detective in this case encounters another recently arrested man in the precinct hall who looks vaguely like Manny, and turns back from his exit to further investigate, discovering that he is responsible for the robberies for which Manny has been accused.

In the frame of the movie, however, Manny's new freedom seems hardly to matter. His wife, locked away in an asylum, apathetically ignores his claims that everything will now be all right. She, so the doctor proclaims, is still "on the dark side of the moon."

Only a written after-note tells us that two years later Rose recovered, allowing the family, perhaps, to return to some normalcy. But one doubts, after all they have been through, that everyday life was ever possible again.