Apichatpong Weerasethakul | Uncle Boonmee Who Can Recall His Past Lives 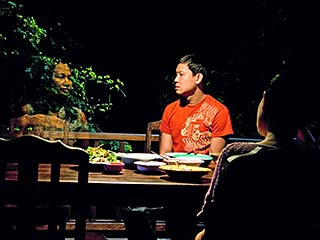 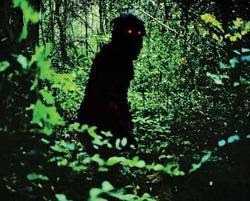 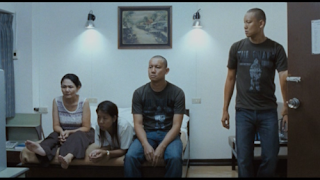 REMEMBRANCE OF THINGS PAST
by Douglas Messerli

It’s always difficult to characterize a film by Thai director Apichatpong Weerasethakul, because each film is so original and clearly stands outside of the Western film-making traditions, while still embracing certain of its tropes.

Weerasethakul creates extraordinarily quiet films, in which characters sit for long periods of time without speaking, or wherein the director presents long scenes, often filmed in nighttime, jungle locations in which the viewer can barely see the images of animals or ghosts, let alone comprehend their significance. Uncle Boonmee Who Can Recall His Past Lives bears close relationships with Weerasethakul’s Tropical Malady, filmed in Northeastern Thailand, the Isan region, bordering Laos.

This film, in fact, was part of a series of art installations, documentaries, and films in 2009 devoted to that region of Thailand which suffered the violent 1965 Thai army crackdown on Communist sympathizers, which killed thousands. Like Tropical Malady where we witness the capture and destruction of a tiger-man, in the new film the director links this region to strange ghost and human-like animals that were also destroyed in the army’s “rehabilitation” of the region.

Although the political ramifications of that period create a sub-theme of Uncle Boonmee, the film is primarily is a long series of meditations on larger issues, including love and loss, the past and the present, actions and their moral ramifications, and, most notably, issues of life and death.

Boonmee, suffering from kidney failure, is dying in his country farm, which raises bees for their honey and tamarinds (useful also in the makeup of the bee’s honey). Sensing that he is soon to die, Boonmee (Thanapat Saisaymar) invites his wife’s sister, Auntie Jen (Jenjira Pongpas) to come stay with him, she, in turn, bringing along Thong (Sakda Kaewbuadee) to help cook for brother-in-law within his limited diet. Already gathered at the farm are numerous immigrant workers, hired by Boonmee, including his Laos-born head worker Jai (Samud Kugasang) who helps with Boonmee’s constant dialysis needs. If this is an odd gathering, the outspoken and somewhat bigoted Jen (the Laos are smelly, she proclaims) and open-minded and loving Jai, the dying Boonmee and the equally faithful and loving Thong, it soon is joined by an even odder couple, the ghost of Boonmee’s long-dead wife Huay (Natthakarn Aphaiwonk), as beautiful and young as upon the day she died, and Boonmee’s long-missing son, Boonson (Geerasak Kulhong), who, having become infatuated with a monkey ghost, has himself become one of the furry, red-eyed creatures.

The latter two suddenly show up at a family dinner, and are greeted by all with, after a bit of wonderment, open, with amazing acceptance, leading to a slightly surreal discussion of what their lives are now like, and how they have come to be there. It is Boonmee, of course, in his death throes that has drawn them, and according to Bongsong, dozens of other spirits and monsters. But their appearance, although based on Thai science-fiction figures Weersethakul encountered as a child, frighten less than they produce a sense of awe, as we realize that in this place and in the director’s universe the dead and alive, the past and the present, and animal and human are all interlinked. A later story about a plain-looking princess who sees herself into the waters as a beautiful young woman, a vision created, apparently, by a loving catfish, ends with her giving up her jewels and dresses for intercourse with the randy fish in order that she might turn into the vision itself, the woman with white skin. Other visions include Boonmee’s who comprehension that he, in another life, was born in a cave and that his present death relates to the karma caused by his collaboration with the Thai army which not only killed communists and all the “outsider” beings that existed in this isolated territory.

In a Weerasethakul work, all things interrelate, even if we cannot comprehend the links he suggests. And this work is also about the transformations of art—the visions we have of reality—particularly film, as the director explores various cinematic styles, documentary mixed with epic fantasy, old-style, almost silent-fiction-like acting with realist psychological scenes. Weerasethakul’s own trademark experimentalism consisting of what he, himself, describes as "my kind of film when you see long takes of animals and people driving,” alternates with scenes reminding one of Thai comic books and older Thai television shows. If this sounds “arty,” well, as far as I’m concerned, given the artless film presentations of American cinema, good for it! Weerasethakul’s films demand attention, but in their dark and daring beauty enchant the viewer in the process. There are never easy answers in this director’s works, but the questions they pose make his works matter in a way that few contemporary films achieve.

Boonmee’s strange death is followed up by a Buddhist ceremony and an aftermath in which Jen and her daughter sit in a hotel room counting up the contributions of money sent in memory of Boonmee. Into this cold and inhospitable room where Jen and her daughter appear somewhat mercenary, enters a Buddhist monk, clearly unhappy in his future role in life and unable to sleep in the isolated and desolate temple in which he lives. In a strange transaction that reminds one a bit of Carey Grant entering a lover’s room, the monk asking if he might take a shower in their bathroom (Grant takes showers in women’s rooms in both North by Northwest and Charade). Changing his clothes to that of a modern Thai boy, the monk invites Jen to dinner, to which she (at least one aspect of her) agrees, we observing her at a nearby restaurant where the two begin to talk. Another part of her stays, while her daughter falls to sleep, the monk and her sitting at the end of the bed enwrapped in a television show. Either way, it is clearly, for the lonely Jen and dissatisfied young monk, the beginning of something new, suggesting a potential to start over again. One can only wonder, of course, if this is Uncle Boonmee come back to begin yet a new life.