Busby Berkeley | The Gang's All Here 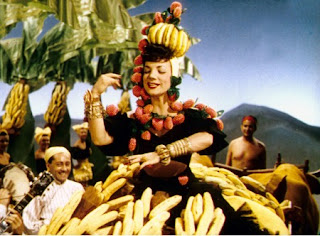 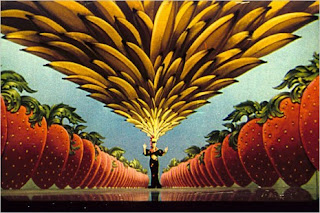 At first glance, it may be hard to even imagine Carmen Miranda’s performance of “The Lady in the Tutti Frutti Hat” as being described as a dance. Although Miranda had long before proven that she can dance—or at least smartly wave her hips—in pieces such as “Chica Chica Book Chic” from A Night in Rio, in The Gang’s All Here’s “Tutti Frutti Hat” we see her mostly from the knees up, and the movements she makes are almost all in her hands and eyes. The piece might best be described as a kind of choreographed performance, yet that doesn’t really do justice to Busby Berkeley’s giddily absurd number, which TV Guide once described as “a male hairdresser’s acid trip.” And, in the end, I feel that if this isn’t dance—which the Random House Abridged Dictionary defines, in its first definition, as “to move one’s feet or hands, or both, rhythmically in time to music”—I don’t know what we might call it. As ridiculous, moreover, as this particular dance may be, it is certainly one of the most strange and original of dances ever performed on the screen.

Berkeley has always defined his choeography as being made up of numerous of the same things, usually beautiful chorus girls, moving in visual patterns, which this piece demonstrates fully. Supposedly performed on a nightclub stage, “Tutti Frutti” begins with the arrival of an organ grinder and monkey, who pass through the audience of the club (representing the audience as well in the movie theater), allowing his monkey to jump to the top of a banana tree, whereupon we discover several other matching monkeys and banana trees. Beyond the trees lies an island strewn with the bodies of chorus girls lying, again in a vague pattern of banana-like curves. A cart approaches upon which Dorita (Carmen Miranda) sits singing about her propensity to wear high hats, which she will not remove for anyone, including the many men whom she meets. The hat, made up of bananas and other fruits is truly “tutti frutti” in all the meanings of that word, and, as if to carry the metaphor into its fullest realization, the women bring forth a series of other banana and fruit-laced “things,” including a xylophone made up of bananas, upon which Dorita performs, along with, obviously, outsized bananas, which they wave up in down in patterns that suggest not just the ocean but, you guessed it, sex itself.

In case the audience misses this obvious reference, the girls put their own bodies, shot from Berkeley’s famed crane shots, on the line, linking them below the camera’s gaze into kaleidoscopic patterns of delicious flesh and fruits. As Dorita turns to go, the girls again run to the edge of the island to wave their monstrous bananas (censors insisted they could hold their bananas only from the waist, not from the hip) in slow motion imagery.

Panning away, the camera returns us to the audience wherein a long row of organ grinders now retrieve the several monkeys, disappearing from sight.

The whole event is so hilariously gay, in all senses of that word (part of Miranda’s song reads, “Some people say I dress too gay, But ev'ry day, I feel so gay; And when I'm gay, I dress that way, Is something wrong with that?”) that it clearly defined the “camp” sensibility long before Susan Sontag even began to write.