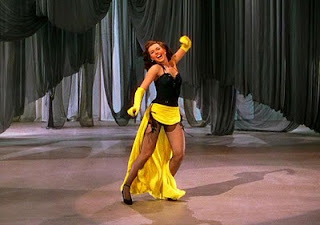 Clad in a yellow dress cutaway in front—so that all can keep their eyes peeled on her long, shapely legs—with a longer, knee-high train in back, Ann Miller, hands in air, smile frozen upon her face, is kept busy “Shaking the Blues Away” in Easter Parade. The cascades of her coiled hear on the top of her head echoes her frilly black bustier and the drapes behind her, all intimating something so close to kitsch that it is hard to take her seriously. Yet how she can dance, tapping her feet out as fast as a speed typist. Reputedly, the taps were fabricated by the sound man in most of her films, but she moves her gams so well that we are certain that her toes perfectly match those clicks.

Throughout the film she is mad at Don Hewes (Fred Astaire) and jealous of his attentions to his new partner, Hannah Brown (Judy Garland). So that jackhammer of a performance might almost be interpreted as nails driven into his coffin (Hewes sits in the audience), or, at least, a kind of passionate dance of revenge. But then, Miller always seems to be giving her all, if a little ungainly at times, stirring a storm up to the rafters.