Francis Ford Coppola | One from the Heart 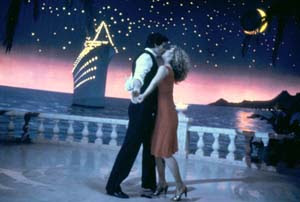 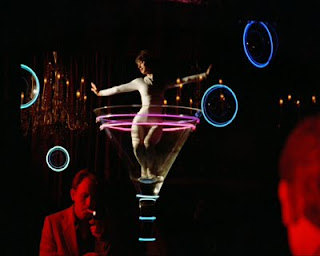 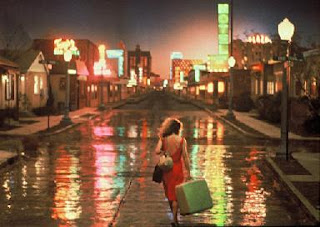 I suspect many critics and moviegoers disliked Coppola's absolutely charming One from the Heart for its lack of realism, something they may have felt was essential to his great Godfather films. In actuality, however, Coppola has always been a romantic, with a greater interest in the theatricality of film than in its realist perspectives. Any filmmaker who might undertake to direct the absurdly ridiculous (but loveable) fantasy of Finian's Rainbow has to be possessed of an inflatable heart, ready to expand at the slightest of yearnings. Equally incredible is Coppola's huge remake of Conrad's Heart of Darkness, a murky tale in the first place, but even darker and more inscrutable in Coppola's Apocalypse Now, a film that nearly killed everyone in its making. Although I think any slightly perceptive viewer realized the Godfather films were romantically inspired—if nothing else Nino Rota's and Carmine Coppola's musical scores make that evident—yet many felt that the New York and Italian settings lent these films a deep sense of realist sensibility. Looking back on Godfather and Godfather II we can now see just how both films are romantic noirs at heart, bigger and more audacious than any "slice of life" movie might possibly have been able to achieve.

In One from the Heart, however, Coppola seemed determined from the beginning to attempt to outdo Douglas Sirk and Nicholas Ray, to make it clear to his admirers just how deeply his work was embedded in theatricality and melodrama. Instead of shooting on location, the entire film, including La Vegas' McCarran Airport, was shot at his Zoetrope studios—that is, except for the most theatrical scene of all, shot on the back lot of a "Las Vegas junkyard" set. The lighting is pure hokum, everything awash in stage lights throughout, while the minimal dialogue is elucidated through the music of Tom Waits, as if the work were a homegrown opera. Those who know my writings will immediately recognize that, while Coppola might have disappointed American audiences (the film cost more than 26 million dollars, while netting only $636,796!, bankrupting his studio), the director gave me much of what I wanted to see.

That is not to say that One from the Heart is an entirely successful work of art. The story is so simple that it is difficult to describe it as plot. Hank (with the sad-sack look of Frederic Forrest) and Frannie (the very much "egg-shaped" [as she is described by Hank] Terri Garr) are about to celebrate their 5th anniversary. But during the minimal celebrations Frannie announces she is leaving him. Long desiring to get away from her travel-agent job—with an intense desire to go anywhere or do anything out of the ordinary—she runs into the arms of the sleazy romancer Ray (Raúl Juliá), who, on the night she visits the club in which he has told her he sings and plays the piano, is serving as a waiter. He quits on the spot, impressing the desirous Frannie with his spontaneity, if nothing else. During two long nights (I should perhaps have titled these pieces "Five Long Nights"), the couple make love and plot to escape to Bora Bora, often described in tourist books as "the center of the romantic universe." Both Frannie and Ray live life less in the moment than in a sort of idealized future, just the world Coppola has whipped up through his designers and lighting artists.

If Hank is less imaginative and slow to catch on, with the help of his "friend" Moe (a role well acted by Harry Dean Stanton), he goes on his own romantic spree, picking up a circus artist, Lelia (Nastassja Kinski) along the way, and spending at least one long night with her wandering through the magical junkyard set I described above, where everything seems to proclaim the possibility of romantic apotheosis.

Yet, "the little boy blue," Hank is not thoroughly satisfied with his new romance, and unthinkingly tracks down Frannie and Ray in a motel room, carrying her away like a naked trophy; she is, in fact, undressed, and must redress herself during their quick voyage home.

This time, Frannie is determined to leave forever, and, apparently, is off to Bora Bora with her new lover. Desperately, Hank—the romantic urge rising up in him—rushes off to the airport to bring her home once more. Frannie turns to see him as the airplane door is about to close.

Having previously pleaded "If I could sing, I'd sing. I can't sing, Frannie!" Hank now bleats out "You Are My Sunshine." But it is too late.

Hank returns to their house in despair, followed shortly after by a repentant Frannie.

As one can observe in my brief recounting of the film's "story," there's not much there to keep one interested, and the acting—although certainly competent—is equally vague, since the chorus of Chrystal Gayle and Tom Waits far outweighs the lines given to the cast. As Janet Maslin complained in her New York Times review, "the sets are invariably more interesting than the people who inhabit them." This is simply neither a character nor a dramatic piece, but like much of opera, is based on the composer's skills and the director's ability to bring out the epic wonderment of an often slender tale.

If you think that the real Las Vegas, with the bright lights of its architectural absurdities, would be sufficient as a theatrical backdrop, Coppola obviously disagrees, providing a far more lurid desert town with the kind of lit-up dizziness of Las Vegas in its early days combined with the ruins of that one-time world. The way Coppola portrays it, Las Vegas is far more romantic, even paradisiacal—as artificial as we know it to be—than any Tahitian island could possibly have been.