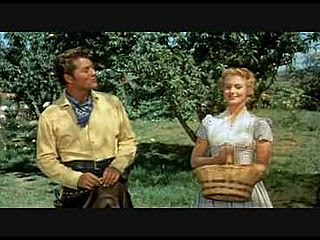 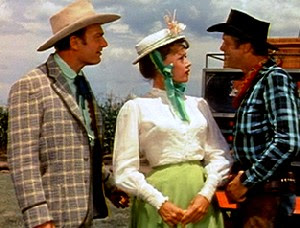 STATE OF UNCERTAINTY
by Douglas Messerli

The first thing that springs to mind when thinking of the musical Oklahoma! is its joyousness. This is, after all, a paean to the settlement of the American West—without all the guilt-evoking images of Indians, buffalo, and gunslinger-ridden bars with their show-girl hussies. It takes place on a farm where “the corn is as high as an elephant’s eye,” far away from the sumptuous temptations of Kansas City. Its major action is a journey to a nearby ranch, where a combination potluck, hoe-down is to be given in order to help raise money to build a new school house. The intimate jealousies of the characters are overcome by the obvious love between Curley and Laurey which must inevitably be consummated in marriage, with chorus in tow, in an anthem to statehood that quite literally spells out their affirmation of place.

But beware! This is, after all, an American work, and as I have demonstrated throughout my writings, there’s quicksand in these here parts. First, there is the case of Ado Annie, practically a nymphomaniac (a girl who “cain’t say no”), who, although loved by the gentle cowboy Will, is just as ready to run off with a Persian traveling salesman, to whom her own father (a role I played in a high school production) is perfectly willing, even eager, with shotgun in hand, to give her away. Curley, moreover, is a bit too self-sure with regard to Laurey; and to spite him, she agrees to attend the upcoming affair with the hired hand, Jud—a filthy pig of a man who buys pornography from the traveling salesman and spends some of his spare time playing a voyeur to his employer. The young woman is clearer dumber than she seems.

Curley takes time off from his flirtations with “that Jenkins gal” to visit Jud in his hovel, implanting within the creature’s mind the joys and beauty of suicide. “Poor Jud Is Dead” may be a wonderfully comic number, but it represents black humor worthy of John Hawkes or the British writer Joe Orton. And the scene ends, predictably, with guns—fortunately aimed at a hole in the wall and not at one another.

The center of this great musical lies not in its hoe-down or in its ending affirmation, but in Laurey’s dream, a scene in which the “drugged” girl (to be fair it’s only smelling salts named “The Elixirs of Egypt”) attempts to see into the future. What she witnesses we could have easily predicted: in Agnes DeMilles’s stunning dances the cowboys and farm girls serve up a celebration of Americana with particular emphasis on DeMilles’s hands-to-hips to outstretched gestures of community, prayer, and, ultimately church steeple. But, in some ways, this part of the dance is purely gestural. Even the cowboys’ oval-legged step into hoe-down, suggesting obviously their more common placement on the rump of their horses, seems a bit wooden—despite occasional exuberance, pattern and propriety dominate. Of much more interest to me—particularly when I first saw the film as a child and despite what I recognized even then as kitschy sets—were the long-legged contortions of the bar-room molls controlled by the dancing Jud. Their final fling into a French can-can was far more exciting, even if a bit horrifying. And Laurey’s terror at not being able to escape so powerful a force is quite justified. She’s an innocent, totally unable to assimilate Jud’s pent-up passion and lust. Even as she accepts his company on route to the social event, it is inevitable that she must flee his presence like the serpent Curley has compared him to. He, in turn, just as inevitably seeks other remedies in the form of “the little wonder,” a mechanical device that, while revealing pictures of naked women, releases a knife that slits the throat of its viewer.

Meanwhile, back on the ranch, or should we say farm, a range war is brewing. Even as they dance, it is clear that it is difficult for the farmer and the cowman to remain friends. In truth, the battle was waged for decades throughout Texas and Oklahoma; in the film it merely takes Aunt Eller a bit strong-arm cajoling and a gun to return things to order. And so, too, does Aunt Eller save Curley from viewing Jud’s dirty pictures.

Laurey is restored to Curley’s arms, but the so-called friendly society treats him to a somewhat sinister shivaree, which isolates them on a mountain of hay, the perfect place for the immolation Jud has now planned. Fire breaks out. Curley’s dive onto his nemesis accidentally implants Jud’s knife into his own chest.

The good folk of the soon-to-be new state set up a hasty trial, but in their impatience to see Curley and Laurey catch their train to happiness, they hurriedly—and without due process—pronounce him innocent. Of course, he is innocent, but one wonders about such a society, with the violent forces and raw feelings lying just below its surface. Perhaps that’s why DeMille’s depiction of the community in dance appears so gestural, so procedural. Only a strong anthem can drive away the elemental rhythms of a can-can.

In the few weeks since I wrote about Oklahoma! I watched a version of the British 1998 revival on television. That production, a generally fine one—with particularly good performances by Hugh Jackman and Josefina Gabrielle, but with weaker secondary character actors than the movie and what I felt was uninspired choreography by Susan Stroman (the good territory folks were even more gestural and less exuberant in her version)—basically supported my feelings about the dark elements of this fable.

Even though the Trevor Nunn production attempted to portray Jud in a more balanced manner, and actor Shuler Hensley succeeded (compared to the film portrayal by Rod Steiger) in making Jud more likeable, the dangerous aspects of the culture he represents remained embedded in his behavior. Indeed, in this production it became even more apparent that Laurey had chosen to go with him to the social because he was a farmer, and, accordingly, someone more familiar than the self-assured cowboy Curley. What the film had not revealed to me quite as clearly as the play was that, upon asking Laurey to marry him, Curley “converts,” so to speak, promising to become a farmer. The two warring factions—farmer and cowman—demand alliances, it appears, almost like the family kinships of Romeo and Juliet. And the musical even more pointedly reveals that Aunt Eller and friends are ready to break the law—or at least, as she puts it, “bend it a little”—in order to speed love on its course.

I am even more convinced after seeing this stage production that Oklahoma!, despite its energetic portrayal of the American frontier, just as clearly reveals the underlying contradictions and perversities of American life.

Perhaps the only advantage to not having the financial means to publish books closer to the date in which they written is that I get the opportunity to rewrite and revise—in this case nearly six years after the fact!

I recently saw Oklahoma! again on The Movie Channel on television, and found the work almost as refreshing and entertaining as the first time saw it as a child. As I told Howard, I'm still convinced that, along with West Side Story, the nearly impossible Finian's Rainbow, and Guys and Dolls, it is one of the great American musicals.

Some of Hammerstein's lyrics, however, have yellowed a bit over the years, particularly those of the memorable anthem "People Will Say We're In Love." It is hard to imagine, for example, that a farm girl such as Laurey might even have had "a rose and a glove" which she exhorts Curley to return. Although spirited, Laurey seems to lack a sense of humor which might lead her friend to "laugh at her jokes too much." And even more to the point, it seems ludicrous for her to sing "Don't please my folks too much" when she has, evidently, no living parents, only a maiden aunt.

In fact, there are hardly any normal family units in this popular family entertainment. Ado Annie apparently lives alone with her father, who, as I mentioned above, is only too ready to have his daughter taken off his hands. Most of the males in this work, unmarried cowboys, work for rancher Andrew Carnes, who also seems to live without a wife, with no children in sight. The beautiful women of the chorus, all quite desperate for husbands, seem to have had no success. This 1955 film, most importantly, presents a world entirely without young children—unless you count the two youngest dancers as kids; to me they seem more like young adults. It is as if the small town of Claremont and environs has been emptied of normal families. Why, one can only wonder, are they attempting to raise money for a schoolhouse? If there was ever example of "voices without a voice," Oklahoma! represents it. For the family values it espouses seem to have little effect upon the figures we encounter.

Finally, I would suggest that Curley and Laurey—now that handyman Jud Frye is dead—cut that honeymoon trip short and return immediately to pick and shuck that corn "as high as an elephant's eye" if Aunt Eller and her farm is to survive.