Hiroshi Teshigahara | Suna no onna (Woman of the Dunes) and Rikyū

two films by hiroshi teshigahara
a house at sea

Kōbō Abe (screenplay, based on his novel), Hiroshi Teshigahara (director) Suna no onna (Woman of the Dunes) /1964

The death of Hiroshi Teshigahara on April 14th of 2001, led me to review the film, which I last saw, I believe, while in college. I remembered little of the film, and was delighted to rediscover/discover this masterpiece.

Although critics of the sixties (and some today) make a great deal of Abe's existentialist concerns, I think today the film points us less to its philosophical (and thematic) issues, while revealing its closer relationship to the Absurdists of the 1950s and early 1960s such as Eugène Ionesco and Samuel Beckett. While clearly having a relationship with Sartre's and Camus' ideas, the film has less to do with moral action than it does with indeterminate purposelessness, and its metaphors continually point to the absurdity of the major characters' situations.


Like many of the film's beautiful images, the plot is nearly an abstraction and can be easily summarized: an entomologist, Niki Jumpei, visits an isolated island consisting mainly of sand dunes, home to the beetle he is researching. He plans three days on this desolate island, returning to civilization each afternoon by bus. When he misses the bus, some local villagers, actually wily town elders, suggest that he stay in a local house. The houses, however, all appear to be located in deep ravines of stand, with access only through rope ladders.

Niki, a true innocent, descends to the house assigned to him, and enjoys a pleasant meal, despite the continuing intrusion of sand, with the woman living there, a widow whose husband and daughter and been buried in a sand storm.

At first, the widow seems highly uneducated, explaining the her house is also subject to rot because of the moisture in the sand, an idea to which the scientist, Niki, ridicules: we all know sand is dry. Other such sentiments have led some critics to describe her as ignorant, but we later learn that she is far wiser than her "guest."

The widow spends the night, oddly to Niki's way of thought, digging out the sand from around her ramshackle house, depositing it in containers which the locals hoist up and spirit away (for illegal use, we later learn, in construction; sand with such a heavy salt content is no good in making concrete). She explains that it's easier to work at night, and the sand must be taken away if her and her neighbor's houses are to survive. Despite the continual rain of the fine grains of sand, Niki eventually falls to sleep, awakening to observe his now-naked host lying upon her futon.

Dressing, Niki arranges his knapsack and bugs, preparing to leave; but when he seeks out the ladder, he discovers it has been pulled up. Desperately, he tries to climb the walls of sand on either side of the house, producing merely small avalanches of more sand that results in him falling back to where he has started from.

Querying his host, the terrified Niki demands an explanation for what she answers "he already knows." He has been duped by the locals, and is now trapped like an animal in this hell of a sand pit. The island gets few visitors, and like others before him, he has been "kidnapped" to help in the village's activities.

The rest of the film is a study in Niki's reactions, as, at first remaining determined to escape, he refuses to help shovel the sand, later turning to violence, gagging and typing up the woman. When he finally takes the towel from her mouth, she explains that the drink and food they have are rationed, and they will not deliver any new water until he begins to work.

As the two endure the never-ending rain of sand in their horrific thirst, Niki finally surrenders, and water is delivered. In a beautifully filmed scene of high eroticism, the two carefully brush and wash the sand from each other's bodies, the woman—who obviously has been starving for the touch of a human hand—gasping in the simple pleasure of the act.

Niki later binds together enough rope to temporarily escape, but when he attempts to outrun the local posse, he falls into quicksand; they dig him out only to return him to his internment. Pleading for just a hour each day at the ocean, Niki is hopeful that the local leaders may decide in his favor. 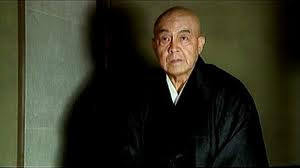 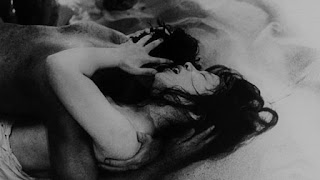 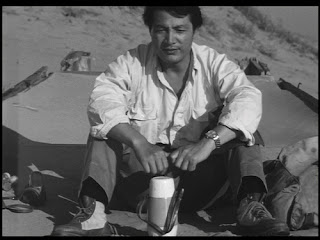 They will grant him his wish, they report, only if he performs sex with the "woman" while the entire village looks on. evidently their only form of entertainment. In a violent scene in which he attempts to force her to join him in the act, Niki loses out to the woman who is determined to keep her moral ground.
Niki, it is apparent, must come to terms with the absurd conditions of his existence. At one point, he asks the obvious existential question: "Do you shovel to survive, or survive to shovel?" Yet a far more important interchange re-veals the miraculous sal-vation of their lives; referring to the endless sand about them, the man observes: "It's like building a house in the water when ships exist. Why insist on a house?" The wiser woman provides the simplest of answers in such an absurd world: "You want to go home too."

The home Teshigahara builds for the film viewer is an ever shifting reality that is simultaneously both breathtakingly beautiful and horrific. For this couple not only must live in a world in which no values are permanent, but endure a ever changing landscape that reminds them every moment of their own mortality. Whereas, at the beginning of the movie, Niki checks his watch often, by the end of the film his new Eve reports that she has no idea of the time.

What ultimately comes to matter most is the relationship forged between the two. When the woman becomes pregnant and the villagers are forced to lower a ladder to take her away, they forget to pull it up, and Niki cautiously follows them into a possible escape.

Yet in the next scene we see him against the house in the pit of sand. He cannot leave her. Besides he has made a new discovery: he has found a way to draw water out of sand just as she has maintained a house on a sea of sand. The absurd has been transformed into reality.

The great Sixteenth century master of the tea ceremony and aesthetician Sen no Rikyū carefully fills the pot with water in preparation for the highly ritualized tea ceremony. Upon choosing a single flower from a bush for an floral arrangement, he commands that all the others in bloom be cut away. The ceremony itself, the tea prepared as part of Rikyū's lessons for his master, Toyotomi Hideyoshi, is a slow one, filmed by Teshigahara in dark tones, with the only the red bowl (Hideyoshi will not permit black bowls, although they too are described as "venerable") that will eventually contain the tea glowing against the rest of the screen.

In a sense, this one scene is the essence of Teshigahara's 1989 film, and the pace of this scene, the quietness of tone, and the fraught relationship of master teacher to his master warrior alters little throughout the rest of the movie. Like the ceremony itself, everything in Rikyū lies in the subtle details of movement and verbal expression.

Hideyoshi is most appreciative of Rikyū's (the great Japanese actor Rentaro Mikuni) lessons, and it is clear he would like to become an cultured man of aesthetics like his teacher, and he seeks the graciousness and ceremony of the traditions. Yet he is a crude version of his own desires, at heart a brutal warrior, who as the movie proceeds, grows into an increasingly blundering ox. It is clear that ultimately, the two men, Rikyū and Hideyoshi cannot coexist.

One of his first great joys is Hideyoshi's invitation to serve tea to the emperor himself, an honor that might overwhelm anyone. Teshigahara's subtle direction shows us an unsure server, who begins with shaking hands; yet he does succeed, and this, in turn, leads him to award his tea room with a surface of gold. A new pot, cast especially for him, is rejected since it has turned black.

In the hands of a broader director, we would immediately perceive Rikyū's displeasure in the changes taking place in his master's house. Indeed, some of Rikyū's friends, Soji in particular, are surprised by the teacher's placid acceptance of these changes. Although remaining true to himself, however, Rikyū admits his own love of the gold-covered walls, which makes the room seems almost "infinite."

Like numerous artists before him, Rikyū clearly attempts to remain apart from the political world stirring around him. But when Hideyoshi declares his decision to go to war against both China and Korea, Rikyū recognizes the folly of the acts. Hideyoshi has already demanded the death of his own brother for daring to doubt his intentions, and commands Rikyū to poison him in the tea ceremony.

As the two men, Rikyū and Lord Hidenaga, dine together we are still uncertain of the outcome. But when Rikyū joins him in the drink, we realize that he will disobey his orders and that he can no longer remain neutral in the inevitable war between the moral values of the past and the expedient demands of the present. But Teshigahara also suggests in Rikyū's passivity, that there may, in fact, be no gap between the two. As we all know, the worship of past values and the aggressive brutality of the present may actually represent different aspects of the same thing. One need only remember Hitler's adoration of Wagner to comprehend this fact. The gift of a globe to Hideyoshi might almost be read almost as a reference to Chaplin's comic portrayal of Hitler in The Great Dictator, particularly in the context of Chaplin's own neutrality in World War I.

Even though he has disobeyed his master, Rikyū still refuses, despite Soji's and his brother-in-law's pleas, to save himself and his family. Yet the showdown between the two is inevitable, as Hideyoshi's visits Rikyū, presumably seeking advice. Rikyū advises against his master's attacks on China, which results in the removal of all statues of Rikyū and his being banished to Kyoto. For his insolence he is later ordered to kill himself.

Finally, it seems, Rikyū has realized that art cannot substitute for a life nor protect one from it. As he leaves, he discusses his actions: "I do not want to die, but I do not want to have lived in vain." The film ends with the terrifying vision of a father and daughter playing with the globe, followed by the facts that help us to realize, in the context of this dark and brooding dialogue between action and aesthetics, that all life is fleeting: Rikyū died in 1591. The shogun died six years later in Korea.

Posted by greenintegerblog at 8:01 AM