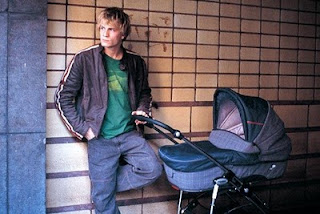 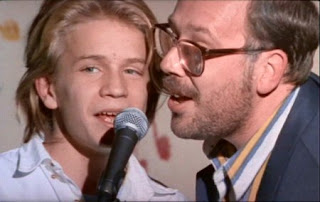 CHILDREN IN DISTRESS
by Douglas Messerli

Sonia has just been released from the hospital with her new baby, Jimmy, and is seeking the whereabouts of the father, Bruno. He has temporarily rented their apartment and is living on the streets, but Sonia is ready to join him with baby in arms. For neither she nor Bruno fully recognize the consequences of their acts. Bruno, who perceives any kind of employment as beneath his dignity (“only suckers work”), lives as a beggar and petty thief. And, like the two boys Bruno uses to accomplish some of the heists, Sonia and Bruno are themselves children, adult enfants who have never grown up. The first part of this beautifully haunting movie is devoted to simply establishing their infantile perspective of life, as the two poke at, chase, and tumble over one another, behaving more like naughty but loving siblings than as the sexual beings they obviously have become too early in their lives.

Sonia, alone, has begun to awaken to her new responsibility, and she attempts to arouse a sense of paternal instinct in Bruno. But while the Belgian filmmakers Jean-Pierre and Luc Dardenne’s camera quickly moves in close to the faces of this duo and stays there for most of the film, the baby is observed almost always at a distance, signifying Bruno’s perception of it. A website reports the movie used over twenty-one babies in the filming of the motion picture, but, except for one or two scenes when the baby cries, a doll would have done as well; for the father the child is no more than a prop. Better that it was a thing, for then it might be something of worth. Bruno recognizes a child in his world as having no meaning other an unaffordable expense. A gold chain, a ring, a coat, a radio, and, especially a telephone are tangible things to be used or sold—things of significance because they are attained with money.

As Sonia and Bruno stand in line to register the child, he offers to take the infant for a ride in its pram, and almost as soon as he has turned the corner, arranges over the telephone to sell it on the black market. A bus ride later, he returns, almost proudly announcing to Sonia what he has done; he now has, after all, a large wad of cash in hand. “We can have another one,” he suggests to smooth things over. The girl collapses and remains unconscious, and he is forced to take her to the hospital.

Bruno now recognizes that she will “spill the beans,” and he is entrapped by his own series of horrifyingly irresponsible acts. Strangely, most of the reviews I’ve read of this movie stop here, suggesting that the film directs its focus away from the child to Bruno’s life. Writing in The New York Times, Manohla Dargis asks, for example, “You yearn to find out who bought Jimmy, and whether his fate lies with a childless couple or an organ mill.” The point is, however, that the child and Bruno are one and the same thing. In actuality, the film structurally rewinds itself.

Quickly realizing that he has this time done something nearly irreparable, Bruno determines to retrieve the child and return him to its mother, an action he successfully accomplishes. In carrying his “trophy” back to Sonia, he has had, this time around, to interact with the child—if nothing else, truly recognizing his son by holding and carrying him. His deeds, however, are not rewarded with a return to normalcy, but with ever-expanding waves of dangerous consequence. The police question him; even though he has returned the money, the black-marketers threaten him, demand he work for them, beat him, and rob him of the few dollars he carries with him in order to eat; released from the hospital, Sonia refuses to speak to him and kicks him out of their apartment. Nearly starved, Bruno sleeps in a cardboard box in his riverside “hideout.”

Desperate to regain the bit of turf he delusionally felt he once controlled, Bruno, like Dickens’s Bill Sykes, plans his most audacious robbery with Steve, his child accomplice. The two succeed in carrying away a woman’s bag, at the bottom of which sits the money she was about to deposit, but they are brutally chased until they must go it on foot. Clinging to the underside of a river overhang, the two are forced to partially immerse themselves in the icy water, and when they attempt to scramble back to shore, Steve falls completely into the river, nearly drowning. Bruno saves him and carries him ashore, attempting to warm up the boy’s legs enough so they can make a run for it; but the child can hardly move his lower torso and as police retrace their tracks, Bruno is forced to escape alone, leaving the child to be arrested.

Having destroyed the only two meaningful relationships he has perhaps ever established, Bruno is left so alone—which the directors perfectly capture in their camera’s almost loving obsession with the image of their anti-hero—that he has no exit left. If he has previously not recognized his own son as something of worth, out of need, if nothing else, he clearly values the life of the young accomplice. His choice to turn himself in comes with the recognition that things are now of less importance than human beings. The tears he and Sonia later share in their prison room conference are no longer those of selfish innocents but of painfully aware adults.

The 1996 film by the brothers Dardenne, La Promesse, shares much in common with L’Enfant. In this moving work the same actor, Jérémie Renier—nine years before the second film, when he was still a young boy—plays another petty thief, Igor, this time working for his beloved father, Roger. Although he is apprenticing to become an auto mechanic, his first act of the film is to steal the billfold of an elderly lady whose car he is servicing, and we quickly see that—given his father’s demands—he will never even rise to the position of mechanic. After repeatedly leaving his job early in order to help his father, he is fired.

Roger is in the business of exploiting lives, helping illegal aliens enter the country in turn for near-complete servitude to him as he provides them with a place to live and an indentured job constructing his “dream” home, described in the English translation as “the white house,” clearly representing for the father the Belgian equivalent of the “American dream.”

Roger, universally hated by his “servants,” uses his own son to collect rent, to service their few needs, and to create the necessary documents they’ll need upon their eventual release from his debt. In a sense, Roger is what one might call a small-time facilitator: he represents the necessary step for these illegal aliens to gradually slip into the fabric of Belgian society, and in that sense he may be a sleazy exploiter of these hopeful men and women, but he is a necessary conduit to their new lives.

It is this grey zone of behavior that allows the viewer to both hate and sympathize with Igor’s father. Moreover, the Dardennes represent him as a family man; although a younger woman has quite obviously replaced Igor’s mother, Roger, despite his obvious abuse of his son, remains, on his own terms, also a loving father, rewarding Igor with tattoos, a ring that matches his own, and spending money. The ring is particularly meaningful in this quiet film in which there is little dialogue, for it symbolizes a committed relationship between father and son, a bond that is best expressed cinematically in their off-key but perfectly synchronized rendition of a popular song in the local bar.

The audience, however, realizes quite early in this film that just below the surface of this easy exploitation of foreigners and son is a potential for violence that may destroy anyone in its way. In one of the earliest scenes of the movie, we are introduced to Assita (Assita Ouedraogo), a Burkina Fasso woman who, with her child, has arrived to join her husband Hamidou. Igor is mesmerized by both the grace and beauty of Assita. Watching her as she bathes herself and child, it is clear that for him she and her child represent a resplendant image of love outside of the “male-bondage”—for it is a bondage, not just a “bonding”—between himself and his father. When inspectors raid the “white house” in search of illegal workers, Igor warns the workers, as they scramble into oblivion. But in his attempt to escape, Hamidou falls from the scaffolding. Igor runs to aid him, but it is clear that the man is dying, and Hamidou demands that the boy promise to “take care” of his wife and child. Igor has just enough time to hide the man before the inspectors arrive, and when they leave, he explains what has happened to his father, demanding they take Hamidou to the hospital.

Roger recognizes that the demand is impossible; the doctors will surely report them to the authorities. Hamidou dies where he has been hidden in trash, and his body is buried by Roger and his son in cement. As together they wash Hamidou’s blood from their bodies, we perceive it—through the directors’ lense—as a ritualistic act which further binds the two while also designating the end of Igor’s childhood, reiterated soon after when he passes on the key to his beloved go-cart to a young friend. A day later, Roger beats his son for helping Hamidou’s widow, and Igor is forbidden to visit her again.

Unable to get Assita to leave on her own, Roger—afraid that her presence will bring attention to his entire operation—arranges for a delivery of a telegram, supposedly from her missing husband, to meet him in Germany. When Roger offers to drive her to the rendezvous, it becomes apparent to Igor that he is planning to sell her into prostitution.

As they prepare to leave, Igor suddenly intervenes, escaping with the car and its passengers, Assita and child. Selling the ring his father has given him, he buys her a ticket to Italy, where Hamidou’s brother lives. While he “ditches” the car, we are witness to the kind of life she can look forward to if she stays in Belgium—or, perhaps, can expect in Italy as well. Two local punks piss upon on her and her child as she waits near a bridge, soon after proceeding to drive their motorcycles over the bag in which she carries her worldly possessions.

Igor puts her up temporarily in his previous employer’s vacant apartment, but she is soon on the street again, seeking someone to take her to the hospital: her baby has a fever! No one will stop, and Igor’s attempt to ameliorate the situation is rejected. Assita refuses any further participation in her own victimization.

The child is cared for, and a hospital nurse provides both safer living-quarters and her own legal documents to permit Assita to travel. A tribal shaman is called in to determine the cause of the baby’s continuing fever, a ceremony the young Igor watches with painful dismay as the shaman prophesizes that something secret is being kept within, that the child may die if Assita does not find her husband who has not gone away but remains nearby.

Does she really believe in the ceremony, probes Igor? Yes, she insists.

As they climb the stairs to where she will leave for Italy, Igor finally releases himself from all the shackles of his past (chains which now symbolically and quite literally embrace his father), admitting to Assita what really happened to Hamidou. She turns back, walking into a dubious future with all the pain and necessity of one having to face the past.