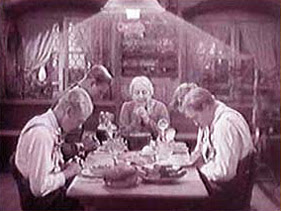 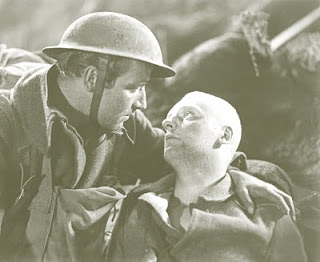 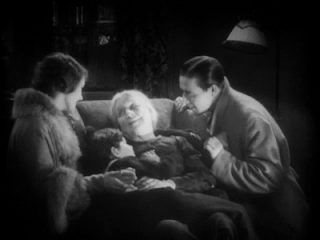 John Ford's significant silent war movie, Four Sons, begins in an absolutely idyllic Bavaria, replete with Bavarian costumes, a comical postman, a goat-bearded schoolmaster, a rotund cafe proprietor, and numerous others coming directly out of a Hollywood costume shop. Myself, I have never quite cozyied up to Bavarian stereotypes, but Ford presents them as part of an idyllic German lifestyle, at the center of which the fortunate Mother Bernle (Margaret Mann), whose birthday is the focus of the first few scenes, as she celebrates with the village types and, most important, with her strapping four sons, one, already a soldier, the others pleasant fellows beloved by the village maidens. Yet during these celebratory acts, it is she, more than any others, who seems to be on the giving end, sharing her new baked honey-cakes with neighborhood children and cooking for the masses.

Into this gentle world, Ford tosses the Major von Somm (Earle Foxe), a new commander who is as ruthless and evil as any film villain, and who will remind some of the later Nazi character-types of World War II movies. Poor Bavaria, however, has no concept yet of the horrors they are about to face, as they lovingly sing and dance (absolutely charming numbers) in celebration of Mother Bernle and their own traditions.

By accident one of the sons, Joseph (the handsome James Hall), has already crossed paths with the new commander, and has had his face slapped simply because some straw has fallen from the wagon in which he sat. Joseph is stunned by the incident, but ignores its implications since he is hoping to soon immigrate to the US. The family, however, has little money, and his chances of leaving seem slim, until Mother Bernle reaches into a secret box in which she has saved up some money that will allow him his dreams.

The elder soldier brother is a bit stunned by the news, but Franz (Francis X. Bushman Jr.) and the young Andreas (George Meeker) seem in support of his adventure. Mother Bernle's celebration, accordingly becomes less a birthday party than a going-away party that hints at the push and pulls that will greet this family over the next years.

Hardly has Joseph begun his journey before the two eldest sons, Johann and Franz, are drafted and sent to the Russian front with Major von Somm. While life continues somewhat normally in the village, the women can be seen packing boxes to send to the soldiers at the front. And Mother Bernle is quite willing to give up her own ration of soup to the nearby children, leaving only bread for herself and Andreas.

Meanwhile, Joseph writes that he is doing well in the US, is about to open a delicatessen and, most important—for Mother Bernle—has fallen in love. She feels blessed, and through the film, turns to God with thanks, no matter what she faces. But her numerous are tests about to begin. Her friend the postman has the terrible task of delivering a black-edged letter, suggesting that someone has died. When Andreas reads her the letter, we discover that both of her sons have been killed in battle!

In the US, which is still neutral in the war, Joseph further achieves success, demonstrated by his wife, Annabelle (June Colyer), bathing their fat and healthy new baby. Joseph's iceman friend (Jack Pennick) ribs him for his devotion.

The German front is proceeding, and suffering has now reached the villages. With the loss of two sons, Mother Bernle appears more like a homeless woman than the hustling hausfrau of earlier scenes. Even worse, she is soon visited by the Major, chastising her for producing a "traitor" in Joseph. Ignoring the fact that she has already given the war two sons, he suggests that he cut off her rations and demands her youngest, Anders, appear at the barracks the following morning. Although she begs him to leave her the one son she has left, it is clearly pointless.

One of the saddest and most beautiful scenes of the film represents her peering into the barracks window as Andreas' beautiful curls are shorn, leaving his head bald. Her attempt to deliver him food as the train pulls off is surely sentimental, but poignant through Mann's understated acting and Ford's attentive direction.

Joseph, as he know, has gone to war, and deep in the trenches with his former-iceman friend, he hears the cries of the nearby Germans, one of them calling out "Mütterchen, Mütterchen" into the night. As the other's fall asleep, Joseph sneaks out into the field, discovering a German soldier dying nearby. Joseph gives him some water as the young soldier reaches out in thanks, seeming to recognize his temporary savior. It is Andreas who dies in his arms.

Again the postman has the impossible task of delivery, which Ford, through the Expressionist device of a shadow of the postman and his envelope upon the wall, plays out as a tableau before the actual delivery. This final test for the old woman seems almost unbearable.

The war has ended, and joy somehow returns to the little Bavarian village, although for Mother Bernle it is clearly too late.

Returning home to the US, Joseph finds, much to his delight, that his wife has expanded the business and turned his small deli into a great restaurant and financial success. In Ford's hands, the jazz rhythms of the city seem almost to counterbalance the earlier harmony of the small European village. Here, despite the frenetic pushes and shoves of the city-folk, all the citizens appear friendly and helpful, a far cry from later depictions of American city-life. Joseph's return to his family is an event of great joy—save one small issue, brought up by his now speaking son, "Where's Grandma?"

Joseph sends off a letter to his mother to come and live with them. But before she can be permitted to leave she must learn the English alphabet. She attends the local classroom, but is slow in learning it, and, as the day of examination appears, is obviously nervous. Through the encouragement, whispers and other machinations of her young fellow students, she stumbles through the English alphabet, giving rise to city-wide celebration.

Once in Ellis Island, however, she is asked to repeat the alphabet before she can exit that door and enter the new world. Suddenly Mother Bernle cannot remember anything. While her family, who has come fetch her, waits, she and they are told she must stay overnight to attempt the recitation again the next morning. After all her numerous tests of faith and commitment to life, she has failed.

The family bleakly returns home, only to be told by telephone that their mother has somehow escaped the island to enter the city. Mother Bernle, accordingly, has yet further tests to face as she enters the mêlée of crowds, the squeeze of subway body and faces, and the general distraction of city activity. Ford uses her final test as a kind of mise-en-scene of every immigrant come to New York, the challenges of that experience condensed into this final test for the old lady. She finally has no choice but to sit upon the curb of a street in complete dismay and despair of ever finding her last son.

Police discover her and gently take her away. Despairing of finding their mother, for whom husband and wife have been on the hunt, they return home to discover the sleeping woman with their son upon her lap, a piece of the celebration cake eaten in their absence. Mother Bernle can finally enjoy her own being.

There is no question that Four Sons is a sentimental, even at times maudlin story, but Ford and his actors most often rise above the simple piety of character and action to convey moving images of an vastly changing world in which even the old must transform themselves in order to survive.