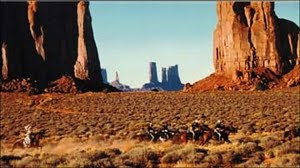 VOICE WITHOUT A VOICE
by Douglas Messerli

Director John Ford’s movie The Searchers is a work of contradictions. From the very first scenes in the film, we perceive that the “anti-hero,” Ethan Edwards (played by John Wayne) is not only a traitor to his country (he fought on the side of the Confederates in the Civil War), but also an outsider (although the war has been over for three years, he is just now returning home), a violent being (he brings with him the symbol of warfare, a saber, which he awards to his young nephew), and a man of great hate, particularly for Indians (he insults the son his brother has adopted for looking like an Indian; he’s part Cherokee).When livestock is found dead, and he joins others in searching for the cause, we further learn how deep is his hatred of Indians, particularly of the Comanche tribe. When this first set of “searchers” discovers livestock that have obviously been speared by Indians, it becomes apparent that they have been lured out only so that the homesteads may be looted. By the time they can get back to their homes, Edwards’s relatives have been attacked, their house burned and all but the small daughter killed and scalped. The daughter, Debbie, has presumably been abducted by the tribe. Despite the advice of friends to reject more killing, Edwards swears revenge, and with a few men, including his nephew Martin—who joins the party to help save Debbie and to control the inevitable violence—begins a search that will continue for several years.

Accordingly, it appears that author and director have set up the perfect vehicle to point up the genocide of the Comanche, and to undercut the usual legends of Western (white) heroism. In one of the early dramatic scenes of the movie, the small band of farmers are flanked on two sides by a vertical line of Comanche, as both slowly move forward; and for a few seconds one hopes that, as the scene visually depicts, there may be hope for co-existence. But the moment the farmers bolt to the river, we know that, while they will escape, the far greater party of Indians will be destroyed. Whereas the farmers are easily able to manipulate their horses across the water, the Comanche (who in reality were noted horsemen) are swallowed up in the mud. Even though both have guns, the farmers seem nearly impervious to the bullets, while many Indians are easily slaughtered.

One is quickly made aware that, although Ford may subtly steer his film into patterns that suggest non-violence, he cannot or will not escape the usual stereotypes. In part, Ford is limited in his possibilities simply because of the realism of his characters. Although there are certainly less violent figures than Edwards, there is not one character in the movie (except perhaps for Martin; and although it pains him to do so, he shares in the shootings) that would not rather see all Indians destroyed.

Some of the narrative, quite obviously, is derived from the historical record, and Ford, always the realist, is determined by that reality of time and place. The Comanche, in their nomadic movements and their continual raids in search of cattle and other goods, became almost the personification of the “wild Indian” in the eyes of settlers, particularly since they did commonly take white captives, treating them as slaves and often harshly abusing them. The famous narrative of Mrs. Rachel Plummer, released in 1839, recounts her and her son’s captivity, during which time her child was taken away, and a second child born to her in the tribe was ultimately tied to a rope and dragged through cactus until the body was torn to shreds.

Moreover, as in this film, the Comanche had several different groups, and each of those often broke into smaller bands. Accordingly, if peace was made with one group, others could continue to violate the treaty. Scar, the chief Edwards seeks in The Searchers, is obviously a rogue figure, while the Indian woman who becomes Martin’s “squaw” is of a more peaceful group.

But as far as the settlers and the military go, there clearly is no difference. Martin’s “squaw” is killed in a military maneuver that takes dozens of Indian women captive, while Scar’s group remains untouched. Here again Ford seems to point up the absurdity of the violence. But with no Indian voice in the film, Ford’s subtle message continues to be swallowed up, particularly since he is so effective in showing in detail the hard life and survival of the settlers. There are few scenes in cinema as frighteningly eerie as the moments in the homestead where the occupants become increasingly aware that they are about to be attacked. Despite the beautiful backdrop of Monument Valley, the sickly yellow-orange sky, the hush of terrifying expectation, and the palpable fears of the inhabitants of the house are so effective that one loses perspective throughout much of the rest of movie and forgets that the Comanche attacks upon these “intruders” might have been partly justified.

There is no question that the John Wayne figure is aberrant in his extreme hate. This is after all a man who, when they come upon an Indian gravesite, shoots at the dead man, who readily would kill his own niece because she has slept with “bucks,” and is absolutely obsessed with the chase that lasts for five years. In one completely revealing moment the director shows Ethan and Martin killing a buffalo for food only to suddenly transform the act into a mad attempt to slaughter dozens of other buffalos so that “the Indians will have less to eat” in winter. But for all his extreme hatred, Edwards himself kills relatively few Indians, and the attacks Ford portrays are, by today’s film standards, quite tame. As I have suggested, the most violent scene is perpetrated by the military rather than the obsessed maniac.

Accordingly, at search’s end Ethan appears almost normal, and although both Debbie and Martin fear he will murder the girl upon her rescue, he simply carries her away to safety.

In the end, The Searchers, despite its potential for exploring and exploding Western myths, merely participates in them. As in almost every Western, the real story here is the transformation of rough and wild white men into civilized beings. At film’s end Martin is destined to be married and Ethan—although previously wanted as a criminal—to be forgiven by the law and assimilated into the new society. The sentiment of a farm woman, who claims that someday this will be a beautiful place in which to live, is visualized by the half-crazy Mose Harper, who stays put by the fire rocking in the chair he demanded for telling Edwards where to find Scar. Edwards may turn away from the closing door of the civilized world, but his search has ended and we know that the Indians will ultimately be destroyed or controlled; he has only to look forward to the fate of Mose.

Los Angeles, September 2003
Reprinted from The Green Integer Review, No. 6 (December 2006).
Posted by greenintegerblog at 11:33 AM