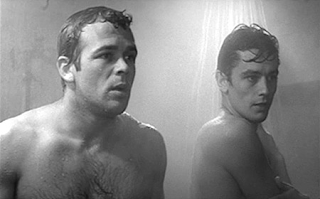 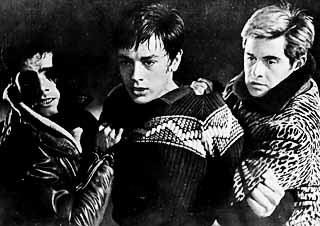 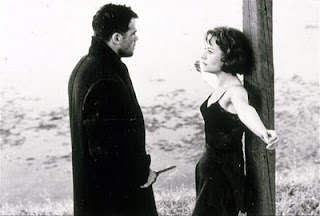 In Luchino Visconti’s 1960 melodramatic film, Rocco e i suoi fratelli (Rocco and His Brothers)—a work I saw for the first time the other day—the first scene portrays the arrival of Rosaria Parondi and four of her sons from the south of Italy to Milan, where they suddenly intrude upon the celebration of Rosaria’s fifth son, Vincenzo, and his fiancée, Ginetta, at her family’s home. Despite Rosaria’s insistence throughout the film that she is concerned only for her boys, it is quite clear that she has no compunction for destroying Vincenzo’s marriage plans and in demanding that he become the sole supporter of her and his brothers.

A fight inevitably breaks out between the more urbanized (and more cultured) Milanese family and the outsider Parondis, as Vincenzo’s relationship with Ginetta is permanently damaged and temporarily put on hold. It is only the first indication we have of how difficult any expression of love will become for all of the Parondi children as Vincenzo sneaks away to have sex with Ginetta in abandoned structures, Simone, the second eldest, falls in love with Nadia, a prostitute, and, later, Rocco—in love with the same woman—is forced to meet her nightly in an isolated, outdoor spot. Only the second youngest brother, Ciro, seems to have any healthy relationship with a woman, actually visiting her family. Love in this mean Milanese landscape is necessarily hidden and experienced on-the-run.

As several critics have noted, the structure of the film, devoting sections to each of the Parondi sons—Vincenzo, Simone, Rocco, Ciro, and Luca—expresses each of their different ways of coming to terms with the foreign culture into which they have been thrust. But, in some cases, there is a great similarity between them: all but Rocco and his impressionable baby brother Luca want to be assimilated into the new culture. Vincenzo, who has preceded the others, has escaped what he has recognized was a world of closed and limited possibilities, eventually finding a job as a construction worker and, when Ginetta becomes pregnant, marrying her. So too does Ciro desire to find his place in the new society, taking a job at a local automobile factory. Simone (Renato Salvatori), who with Rocco is at the center of this film, has similar aspirations, only in his brutal and ignorant rendering of reality, he has no patience for ordinary work, striving—primarily upon the suggestion of Nadia—to become a successful and, more importantly, rich boxer; but even that seemingly quick path to the good life seems to involve too much time and effort, as he begins, first, to steal, then to gamble and, ultimately, to commit murder. Of these young men, only Rocco (a young and beautiful Alain Delon) has no desire to “fit in,” hoping instead to return to the South and a rural life.

Strangely enough, perhaps because of his near complete passivity—he is often told by women throughout the film to “wake up,” as if he is dreaming away the time he spends with them—Rocco is truly successful in this world, if only through a series of unfortunate events. Perhaps his early job at the laundry is the most pleasurable of his brother’s avocations—at least that is what Simone suggests. But when Simone engages in sex with the owner of the establishment and steals her brooch, which he gives Nadia, who returns it, Rocco is fired. Thus begins a series of saintly gestures he endures for the sake of Simone and the others of his family.

In the military, he sends nearly all of his paycheck home—his mother having pled for him to do so, despite the jobs of her other sons. Having served out his duty, he reencounters Nadia, recently released from prison. Placid in demeanor and accepting of nearly anything in life, he alone refuses to judge Nadia, convincing her instead that she is still young and has great possibility, that she should embrace faith instead of the fear in which she has been living her life.

Their relationship is one of near innocence, despite her past, as she seems to be transformed by Rocco and his belief in her. We have already seen, however, that in this bleak urban setting, love has little room to grow, particularly for a blinded cupid. Simone, whose boxing career has taken a downturn, has joined up with ruffian friends, who play Iago to Simone’s Othello, egging him on to do something about Rocco’s and Nadia’s illicit meetings. In one of the most brutal battles between brothers ever staged, Simone intrudes upon that couple’s lovemaking, beating Rocco and raping Nadia in front of him to deter any further fraternal engagement with what he evidently perceives as his whore.

Once again, Rocco, despite a developing hate for his brother—a hate he ultimately displaces by agreeing to enter the boxing ring—forgives Simone, convinced that his brother desperately needs Nadia to help him better his life. His abandonment of her has fatal consequences, she returning to alcohol and prostitution, Simone to his brutal pattern of abuse and petty thievery.

The tender-hearted Rocco, who had previously refused to fight, now achieves the success as a boxer that his brother had failed to, which merely increases Simone’s jealousy of Rocco and of all of his siblings. Simone’s desperation leads him also to prostitution, as he agrees to accept the sexual attentions of the boxing impresario Cecchi, ultimately stealing money even from him.

As Cecchi threatens legal action, Rocco once more gives up any normal future by indenturing himself, against the protestations of his two other brothers, to a boxing career for at least ten more years. In a sense, Rocco, in his selflessness, prostitutes himself at a level even greater than Simone and Nadia.

Another winning bout transforms him into a local hero, which the family celebrates—reminding us of that first scene. In a sense, he is now wed, like Vincenzo—to a violent career, however, instead of to a beautiful woman. While the family toasts one another and their neighbors, Simone has discovered the whereabouts of Nadia, seeking her out with the hope that she may return to him. But she, having fallen to the lowest levels of existence and facing, she believes, reimprisonment, reiterates what Rocco has previously called Simone: a “disgusting” beast. Simone is completely undone, stabbing his lover over and over as she pleads for her life.

His return home in the midst of his family’s celebrations, his clothes smeared with her blood, is one of the most poignant and horrific moments of filmmaking, shifting what has been high melodrama into tragedy. As Simone admits to Nadia’s murder, Rocco, lying on the bed as he holds him, howls in pain, suggesting an almost sexual dance of death derived from a near-incestual love that embraces all the sorrow and anger that the family has endured. While Rocco wants only to attempt to hide his brother, covering up the family shame, Ciro, realizing his civic responsibility, rushes off, Rocco and Luca trying to stop him, to report the murder to the police.

Some critics have maintained that Visconti allowed, in these last scenes, for his film to be pulled in two directions: while obviously arguing for the rational assimilation of these figures into the society in which they now live, in his sensitive portrayal of Rocco he presents a seemingly conflicted representation of a nostalgic love for an impossible past. Yet Ciro’s last conversation with his younger brother, Luca, I would argue, makes it clear that if this family is to have any future, it must embrace the new world, rejecting the familial and sexual gender-based priorities of the South. Luca’s insistence that his brother return home represents a spiritual awakening in this family, a simultaneous acceptance of both Rocco’s spiritually-inspired nostalgia* and Ciro’s more socially oriented pragmatism.

_____
*It is interesting to note that Rocco tells Nadia of his plans to abandon her for his brother’s sake, a nearly saintly act, upon the parapets of the Duomo di Milano, that city’s major cathedral.