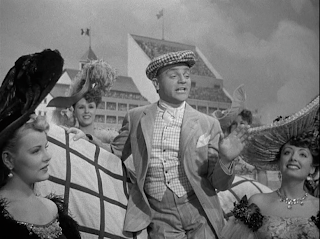 For those who have only seen Cagney in his gangster films such as Little Ceasar, The Public Enemy, and G Men, it will come as a surprise, I am sure, that he was also—if almost accidentally—one of Hollywood's greatest dancers. Playing George M. Cohan performing in one of his musicals as a jockey who has been accused of fixing a race, Cagney awaits a signal from a nearby ship to tell him of the decision of the jury: he has been acquited and his dance to the tune of "Yankee Doddle Dandy" is a joyfully nervous tapping out of joy that is so original in its combinations of straight tap, turns, spins, and occasional leaps that it is clearly something that he has created himself, outside of the more conventional dance numbers of the film choreographed by Seymour Felix and LeRoy Prinz.

Cagney's whole body is so naturally jumpy that he seems like a marionette on strings, as others have described him; but unlike Ray Bolger's puppet-like Straw Man, described above, Cagney's legs, hands, and shoulders appear never to come to rest, as they dangle at the very moment his torso seems to rise. Instead of being pulled back to earth by gravity, Cagney seems unable to come to rest, his feet nervously tapping away something like the horses this jockey might have raced. Given the heaviness of most of his verbal roles, we are understandably stunned by his lightness of foot. And he can even sing!