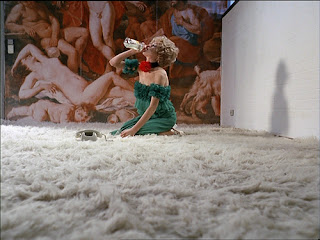 THE BED
by Douglas Messerli

The Bitter Tears of Petra von Kant, first performed as a drama and then redone as a film, is one of the central works of Rainer Werner Fassbinder. In some respects all of his major tropes and structural forms are represented in this drama and film.
In may be helpful to perceive this work as utilizing several patterns from one of Fassbinder’s favorite fictions, Djuna Barnes’ Nightwood. Petra’s sad affair with Karin parallels the lesbian relationship of Nora and Robin in the Barnes book, and the constant fear Nora has about her lover leaving—or in Nightwood’s case, being taken up by someone else – is very much at the center of both works. Similar to Nora and Robin’s home, filled with circus props and dolls, Petra’s house has several manikins whose placement might be said to parallel patterns in the relationship, and symbolize the shadow lives lived by Petra, Marlene, and Karin. Karin’s later statement of having had sex with a Black man calls up Nora’s early encounter, through Dr. O'Connor's story, with Nikka, a performer of the Cirque de Paris.
The most important relationship is Fassbinder’s use of highly elevated language—in his case represented in a mostly melodramatic, even operatic, phrasings that references Barnes’ use of Elizabethan-like word choices and emblematic linguistic patterns. In Petra, as in others of his films, the director also calls up a kind Douglas Sirk-like world in which the everyday problems of the characters particularly of Sirk’s women—represent larger-than-life issues, dramatic situations that reveal major cultural concerns, including everything from racial relationships, frictions between man and woman, and issues of homosexuality, to religious piety and the disobedience of bourgeois cultural norms.
Perhaps the most obvious of Fassbinder’s devices, again a motif in Barnes’ work, is the centrality of Petra’s bed. Awakened by her secretary, Marlene, with whom she shares a sadomasochistic relationship, Petra spends most of the first scene dressing, making herself up and donning a wig in preparation for her day. When her cousin Sidone comes to visit, it is upon the bed the two women sit to discuss primarily male relationships, in which it becomes apparent that Sidone prefers to hide behind her feminine wiles, while Petra is determined to be “honest,” whatever she means by it. Ultimately the conversation turns to Sidone’s introduction of a young woman, Karin Thimm, whom the cousin is convinced will make a perfect model. The two women, Petra and Karin, meet, the conversation continuing upon the bed. Obviously, Petra is attracted to Karin, and she quickly arranges a dinner with her shortly after.
This second encounter again occurs upon Petra’s bed. When Petra learns of Karin’s difficult life, she determines to take her under her wing, so to speak, and, quite literarily, as we soon see, beds her.
The later scene with the two of them awaking after a night when Karin has come home late, shows that the relationship has soured. Hurt, Petra dramatically attempts to maneuver the younger woman in assuring her that she is still in love; but with a telephone call from husband, it becomes apparent that Karin is determined to leave and return to her him.
Only in the final scene, portraying Petra’s descent into a kind of drunken hysteria, does she shift from the bed to the floor, a scene which again parallels Barnes’ novel, wherein, after Robin has left Nora, Robin returns to her in America to fall upon the floor, enacting the actions and behavior of a dog.
Petra’s devolution is a near-mad descent to the lowest surface of her house, as she petulantly awaits a call from Karin. But Petra must face even a greater fall from grace in the revelation to her daughter, mother and cousin, all of whom have arrived to celebrate Petra’s birthday, that she is in love with Karin. Again referencing Nightwood, Fassbinder has Sidonie bring Petra a gift of a blonde-haired doll, a near look-alike for Karin; and with even great cruelty, she announces that Karin is currently in Bremen. Striking out against all these women, Petra performs her bitterest scene upon the floor before returning to the bed, seeking forgiveness from her mother, and determining to find a new balance in her life.
As the others leave, Petra, trapped in a void she has partly created, turns to her secretary Marlene, promising her a new relationship. With brilliant irony, the woman who has withstood so much abuse over so many years, quickly gathers up her clothes and few possessions, packing them away in a suitcase, and leaving Petra in total emptiness. Clearly any expression of love in a world of such abuse is intolerable.
There are some substantial differences, however, between the original dramatic version of this work and Fassbinder’s film version which slightly alter the meaning of the work. In the play, the bed is not nearly as significant, and there is no evidence, at least in the stage directions (I did not see the original performance), that the dinner with Karin in the second act occurs upon the bed; there is no stipulation that most of the fourth act occurs, as it does in the film, upon the floor.
Most importantly, the play ends in a sort of unresolved relationship between Petra and her tortured employee, Marlene. As Marlene goes down upon her knees to kiss Petra’s hand, Petra insists that they sit: “No, not like that. Let’s sit down together. (They sit). Tell me about your life.” Indeed, the dramatic version, unlike the film’s cruelly ironic statement, is closer to what one imagines might occur after Robin performs as a dog before Nora’s demands, and suggests that there may be at least a temporary reconciliation between the two.


*Barnes writes in Nightwood: "There were circus chairs, wooden horses brought from a ring of an old merry-go-round, venetian chandeliers from the Flea Fair, stage-drops from Munich...."

** Both Dr. O'Connor and Nora speak of the centrality of the bed to defining French culture, particularly, of the unmade bed.

*** "The dog began to cry then, running with her, head-on with her head, as if slowly and surely to circumvent her; soft and slow his feet went padding. He ran this way and that, low down in his throat crying, and she grinning and crying with him; crying in shorter and shorter spaces, moving head to head, until she gave up, lying out, her hands beside her, her face turned and weeping; and the dog too gave up then, and lay down, his eyes bloodshot, his head flat along her knees.

**** In her last conversation with Dr. O'Connor Nora discusses at length Robin's relationship with a doll given to Nora, which ends: "She picked up the doll and hurled it to the floor and put her foot on it, crushing her heel into it; and then, as I cam crying behind her, she kicked it, its china head all in dust, its skirt shivering and stiff, whirling over and over across the floor, its blue bow now over, now under." O'Connor goes on to analyze the role of dolls in women's lives.
Posted by greenintegerblog at 8:11 AM