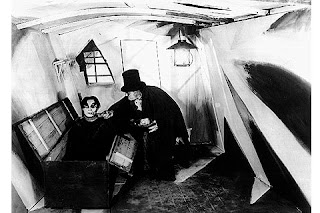 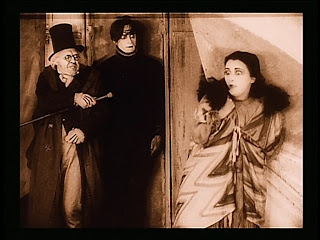 CALIGARI AT THE FAIR
by Douglas Messerli

As anyone who has seen Robert Wiene’s strange German Expressionist film of 1920 will remember, the first half of the film deals with a mad doctor, Caligari, who, it is later revealed, runs the local lunatic asylum. The “cabinet” of Dr. Caligari reveals, through his journal and revered book, that he has become obsessed with a story about another doctor and his somnambulant subject whom he uses to destroy those who cross him or even question his power. Repeating the historical doctor’s experiments, Caligari becomes the mad doctor of history, creating havoc in the small town of Holstenwall as first the town registrar and, later, another young man are murdered.

As the film critic Siegfried Kracauer argues, the script was originally an indictment of the war-time German government and their lust for power, to which the director added a framing device—in which his character, Francis, tells a horror story that, it is revealed late in the film, is one of his own imagining. In fact, the man he believes is Caligari is simply the head of the asylum in which Francis is incarcerated, along with the very figures he has described, the woman he characterizes as his fiancée Jane and the somnambulant Cesare—all of which, so Kracauer argues, obliterates Mayer’s and Janowitz’s more subversive script.

Frankly, I don’t read this film as Kracauer did. Indeed, I see it even more frightening that our “hero” has apparently been locked away under the control of the man he believes to be the evil Caligari; and the doctor’s proclamation at the end of the film, “Now I know how to cure him,” seems to me less of a rational announcement than a threat that Francis may soon also become one of the living dead. But then, at the beginning of the 21st century, it may be that we find it harder to believe in even normal-seeming systems.

This is, however, quite obviously a matter of interpretation: in either case, the core story is a horrific tale of mad power and perverted love. For it is clear that, like the creators of other such monstrous figures (Frankenstein, for example), Caligari seeks through his acolyte, Cesare, control over those about him, and that Cesare serves him as a kind of passive son-lover, whose intense beauty covers for the ugliness of Caligari’s own aspect.

It is these concerns which lead the devious doctor to want to show off his “creation” at the fair, and like all such other power-seekers, to bring attention to his own evil acts. It is never enough that the creator control the surrounding world, he necessarily must show that embodiment of power to the world, demonstrating his mad desires become flesh.

The real cabinet of Dr. Caligari, accordingly, is not the closed shelf in which lies the evidence of his crimes, but the small tent and coffin-like container wherein he keeps the sleeping beauty over whom he has such power. In short, Caligari is willing to risk everything simply to show off his achievement: the encapsulation of all that others may desire—beauty and knowledge.

The important question of this film, accordingly, does not seem to me to be about whether or not the doctor is actually Caligari, or if Francis is sane or mad, but why Caligari—real or imaginary—is willing to risk everything by putting his “doll”—one must remember that when he sends Cesare out to do his evil murders, he replaces his sleeping friend with a dummy—on such obvious display.

In short, it seems less important to me that some men (and governments) seek such absolute control over others, as does the fact that they necessarily must demonstrate that obsession and that that demonstration often ends in their annihilation. How much more dangerous might be a man like the head of the lunatic asylum in which Francis is imprisoned at the end, a man of seemingly rational behavior, a man like Hitchcock’s retiring psychiatric clinic head in Spellbound?