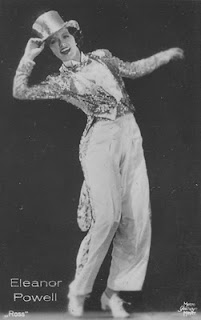 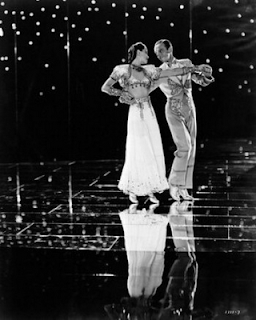 Watching Eleanor Powell's last number in her first starring film role, Broadway Melody of 1936, it is difficult to not be completely dazzled by her movements, while in the same instant perceiving those movements as somehow a bit clunky or, at least, executed with too much intention and force. It's partly her body—she appears taller and lankier than most dancers—and partly her costume—dressed as she is in long stripped satin pants and shirt with rhinestone coat whose tails come down seemingly lower than her knees, all topped with a rhinestone-covered hat. The Yankee Doddle Dandy look gives her a sense of being even taller than she probably was, which helps to make her hips even more central to her physique. Yet, moving through Got to Dance, how she can tap, bend her body backwards nearly to the floor, and spin and spin and spin as she were on ice instead of a gravity-pulling stage. If she hits each tap a little too forcefully, we are still stunned by their impact. It is little wonder that Ann Miller describes Powell as being the major influence upon her entering that career.

Fred Astaire perhaps said it best: "She 'put 'em down like a man', no ricky-ticky-sissy stuff with Ellie. She really knocked out a tap dance in a class by herself." There is something almost manly about her technique, and that is perhaps what makes her taps seem, at times, so emphatic.

Yet when she dances Cole Porter's "Begin the Beguine" with Fred Astaire in Broadway Melody of 1940, we see another, slightly softer side of her. This time dressed in a flowing thin white skirt and a halter trimmed with spangles, Powell seems completely to move with the flow of the Latin rhythm that is often used contrapuntally against the song's tune. Dancing across a black marble floor against a black backspace upon which small pin lights reflect what appear to be stars, Powell matches Astaire nearly perfectly step by step with a grace that seemed to elude her in that earlier number. Together they seem the perfect match.