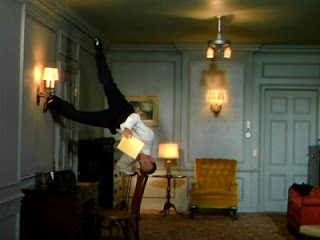 Perhaps the most famous of all film dances, the so-called "Ceiling Dance" of Royal Wedding, is less a spectacular feat of dancing—although Astaire performs with his usual panache—than it is a technical wonder, so well it is achieved by both dancer and designers that it is, at first, difficult to even conceive how the overjoyed Tom Bowen (Astaire), could move from the flat floor of his hotel room up the wall and onto the ceiling, to gradually dance back down again, and up once more, balancing his body on paintings, wall-hangings, and even the chandeliers.

In reality what we are seeing is a room enclosed in a framed wheel that is gradually turned, with the dancer timing his leaps within the slow movement of the rectangular room. The furniture and other trappings are clearly attached into position and, accordingly, are unable to move, allowing Astaire to pretend to balance his head on the back of a chair, climb the desk up the wall, etc.

Some claim the idea was Lerner's, others insist it was Astaire's. But the fact is that it could not have been achieved without Donen's near flawless direction and Astaire's perfect timing, appearing to leap as brilliantly as Spider Man might today. But Spider Man, after all, has his webs to help him, ropes and pulleys. Astaire had only a machine which created a delusion within which he tapped, twirled, jumped, and turned upon his legs.