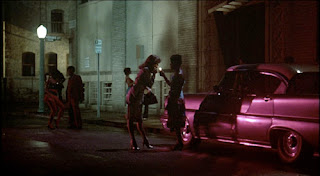 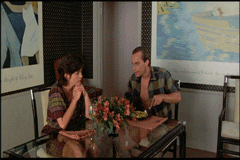 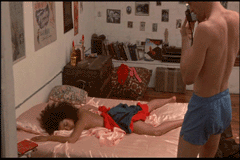 
Alan Rudolph (writer and director) Choose Me / 1984
Much like One from the Heart, Rudolph's movie of two years later begins with music and, in this case, dance. Teddy Pendergrass' song, "Choose Me" ("Come on, choose me, baby /  Ooh, choose me, baby") serves as a kind overture, both structurally and literally, for Rudolph's own operatic-like story. One by one, as Eve's bar closes and people enter the street to be tempted by each other and the seemingly ever-present prostitutes on this small cul-de-sac, we meet some of the major players—all desperate for love, but unable to find the right partners. Each poses, dances, momentarily flirts, but each also leaves alone.
Like Coppola's film, Choose Me is filled in garish colors and theatrically-lit sets that references theater far more than American film history, with the exceptions, once more, of Sirk and Ray. Rudolph, accordingly, makes it clear from the beginning that what we will be witnessing is not a realistic portrayal of down-and-out Los Angeles life, but a comic romance with dark tones and narrative possibilities.
Finally, Rudolph tips his hat to Coppola again (instead of to his mentor, Robert Altman) by heavily employing music throughout, music by Phil Woods, Luther Vandross and Pendergass, that comments on the feelings of the film's characters and its events.
Yet Rudolph's film is much less "sweet," the dialogue, unlike One from the Heart, highly witty, and the film's thematic implications are far more reaching. In one of the very first scenes we witness what is clearly a Veteran Hospital where one of the directors is trying to explain to a family member that she will have to take back into her care a mental patient, Mickey (Keith Carradine), whom they are about to release. Even though his previous violence is mentioned, it is clear that they need the room for more seriously ill patients. But the relative is obviously reluctant, and while the two are speaking, Mickey walks off, reappearing soon after at Eve's bar, over which Eve (Lesley Ann Warren), as owner, superintends. This Eve, however, is not the Eve for whom Mickey is looking; she has apparently killed herself. But the fact hardly seems to matter as Mickey quickly appears to be smitten with the new Eve, staring intensely at her as he drinks (vodka and a beer with "two inches of head."), a habit to which later readily admits ("Pearl Antoine: God, you love to stare at women. Mickey: Old habit."). The implications of his behavior are obvious: he is either a Satan, a snake ready to tempt any Eve he encounters, or an Adam seeking love. We never do discover which being he is, but before the first of these long nights have ended, he asks Eve to marry him.
A regular in this bar, Pearl Antoine (Rae Dawn Chong), is a silly rich woman with pretensions of being a poet. Her poetry might remind some of Gilbert Sorrentino's hilarious satire of poetic aspirations in his fiction Mulligan Stew:
No matter who I'm with,
They want to know if I'm still sleeping with you.
I say that you sleep while I die a little
But I'm not afraid of death.
At least you get laid in your coffin.


Mickey's lack of response, results in Pearl Antoine's upbraiding of him, and his comeback which is worthy of a Sorrentino character:
Pearl Antoine: You weren't even listening.
Mickey: You want to get laid.
Pearl Antoine: It was just a poem.
Mickey: Just a thought.

In fact, Mickey soon reveals that he once taught poetry at Yale, the first of many seemingly "fish tales" he tells, making us suspect that is still quite insane. Later he suggests that he has been an international spy and a commercial photographer, as well as working as a machinist. He has also, so he reports, killed another man over a woman. But whatever his fascinating past, Mickey spends the first night of this tale, sleeping on a bus station bench.


Later we discover that Pearl Antoine visits the bar just to keep an eye on Eve, who is having an affair with Pearl Antoine's seedy ex-husband, Zack. Jealousy and revenge are already in the air, and when Mickey walks away with Pearl Antoine, we witness the look of hurt and suffering in Eve's face. Both Satan and Adam have evidently forsaken her.
In her pain, she telephones the radio doctor, Dr. Love,  who goes by the name of Nancy (Geneviève Bujold), an hilariously portrayed radio host who spouts psychiatric jargon about men, women, and love but who herself is nearing a mental breakdown and is apparently still a virgin ("I've never loved anyone. I don't think I can."). When Dr. Love fails to help, Eve calls up her slightly creepy bartender, Bill Ace (John Larroquette) for sexual fulfillment.
Mickey has joined Pearl Antoine not for sex, it turns out, but because she will take him to a special location where men, including Zack, are gambling. Mickey is desperate for the cash that might take him by bus to Las Vegas so that he can collect his possessions and money he left there. Luck is with him this time around, as he bests Zack.
The marvelous thing about Choose Me is its clever relationships to 19th century French Boulevard comedies. Once the major characters are introduced, one by one Mickey sexually encounters them, first Nancy—who coincidentally has just moved into Eve's house as a roommate. Much like Terence Stamp in Pasolini's film Teorema, each character finds something that excites and enchants them about Mickey's personality and appearance. Nancy is quickly released from her sexual inhibitions, bringing a newfound excitement and wisdom to her radio commentaries, somewhat shocking yet thrilling to her colleagues, particularly her boss, Ralph Chomsky (a reference to the linguist Noam Chomsky?) (played by artist Ed Ruscha).
We also begin to realize through this incident that Mickey may be speaking truthfully when he claims he never lies. In his suitcase Nancy discovers a Yale Review, original photographs of major celebrities, international passports, and articles from the German magazine Stern about Mickey's arrest in the Soviet Union.
Yet we still can only imagine that Mickey is pathological when he suddenly asks Nancy to marry him.
Nancy: Mickey, Mickey. You can't go around asking
every woman you kiss to marry you.
Mickey: Why not?
Nancy: Why not...
Mickey: I only kiss women I'd marry.


Pearl Antoine is equally sexually gratified by Mickey, and, for a few moments, it appears that she may finally free herself of Zack—that is until he enters her apartment at the very moment when Mickey is snapping her almost nude photograph. A fight ensues, Zack becoming the victor, relieving Mickey of his gambling winnings, and socking his ex-wife in the eye.
Coincidences in this film abound. Earlier Zack had called Eve, with Nancy answering the phone, providing him (she has little else to offer) with sexual advice. When he determines to pay Nancy a visit after being scorned by Eve, he discovers Mickey in the house, who has come to talk to Eve. Another fight between the two men breaks out, this time Mickey grabbing the gun and demanding his money back!
Eve, which whom Rudolph's quirky story has begun, is the only one not yet been the recipient of Mickey's sexual charms. Their encounter in the final scenes begins with potential violence—perhaps a repeat of the past—as Eve threatens suicide with a gun. Mickey fails to dissuade her, until he too pulls his gun, threatening his own life.
The two collapse into each other's arms, admitting that their guns were unloaded, in short, that it has all been in demonstration. In the final scene they are on the bus to Las Vegas after, apparently, quickly marrying. Mickey grins like a Cheshire cat, having won the love of Eve. Eve, finally somewhat contented, smiles. A brief conversation with another passenger, who asks if they're going to Las Vegas to gamble, however, troubles her. She replies, "You could call it that," her commentary bringing fear into her face. Is Mickey a true lunatic? "That's why you chose me," he reassures. She smiles, looks troubled again. Mickey remains frozen in his grin.
All of the characters have gambled everything over the three long nights of Choose Me in the hopes of gaining love and meaning in their lives. We—perhaps no one can—know if they have chosen right. For there is no one "truth" when it comes to love.
Los Angeles, October 13, 2011
Posted by greenintegerblog at 8:10 AM