Don Askarian (scriptwriter and director) Musicians / 2000
Although the director has called his 2000 documentary, Musicians, I would suggest that, although many of the figures in this film are indeed musicians, Askarian displays as much interest in “performance”—particularly dance and high-wire movements (which often mimic dance)—as he is with musical sound. And, at times, even when he does focus on musicians, the interest of their performance has less to do with musical sound than with other things in which they engage.
The several scenes filmed in dance clubs and grunge bars in his homeland, Armenia, has far less to do with music—although we do hear recorded music of pieces that seemingly have not been performed in the US—and more to do with the dancing which animates his figures. Perceiving this, Askarian uses stop-frame and strobe lighting to great effect, representing the emotional feelings of the young dancers he is portraying. 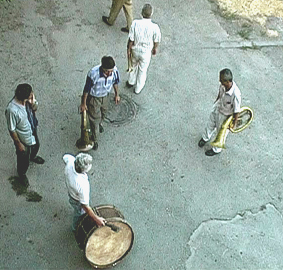 In one long scene, a small musical group, with unbelievably beat-up horns and a long worn-out drum, arrive at their destination against a rotting wall in the city, occasionally blaring a note or two before they sit down across the overturned drum to dine on tomatoes, bread, a stew, cured meats and, most importantly, slightly diluted vodka, before they are willing to take up their instruments again. Their brief performance sounds as if it might have been played by just such a group in Sicily as in the mountainous country north of Turkey and Iran. But soon the players have put down their instruments again to drink more vodka, and it is clear that despite the director’s urging for them to continue in their concert, they are perhaps too drunk to continue with the music. Yet their whole performance, such as it is, is one of the most joyous, even comical moments, of Askarian’s film.
Another “musical” performance involves a funeral ritual at a cemetery. A young boy burns something over the grave, before anointing the spot with oil, and serving drinks to the two men who then play a brief piece upon their reed, flute-like instruments. But the ceremony is far more important, and impressive, than the music with which they close the event.
One of the longest scenes involves a brilliant tight-rope walker performing before the ancient monastery of Khor-Virap. With only a balancing pole, the walker not only gracefully crisscrosses the metal rope which is nearly invisible against the landscape, but walks blindly, his entire body covered in a black robe, across the same space, climbs small ladders balanced upon the wire, and dances in leaps and bounds across the same space as if he were flying in mid-air. True, this performance is also accompanied by music, but it is the wire ballet that is truly awe-inspiring.

When musicians are the subject of Askarian’s documentary—a drummer, two accordion players, and players performing on string instruments that seem related to the lute—they are generally placed in covered pathways, alleys, the halls of Yerevan dwellings, and other odd locations were the camera focuses not only on their performances, but on the comings and goings of passersby or on the street activities of everyday persons, young boys, girls, old men and women who live their lives, apparently, as much on the street as inside their houses. Throughout the strange and soaring music these musicians’ performances is played out against a world of decay—walls, buildings, gates, and other objects peeling away and in near collapse. Even the men who perform these pieces are nearly destroyed, one accordionist—who plays what appears to be improvised pieces—is missing a leg; another displays a large portrait of himself in his youth, in almost painful testimony to the old, toothless man he has become.
That is, obviously, Askarian’s major point. As he writes of this film:
What happens after the empire? All know and expect it in the advance,
only one thing they don’t know: Despite the destruction, the disintegration,
the betrayal…despite the annihilation of all bases of the life, the music
sounds, and how it sounds! Higher and higher, over the human sorrow
and over the pain! It is also one, daily practiced mental attitude, stand
and exercise, that awakens a hope in the abandoned and in those, who
already have lost the last hope.
I would argue, however, it isn’t just the music that represents this but the positions, the movements these figures make, their insistence upon performing whatever it is they left to display. The old women who stare out the windows, those who stand upon the streets with a kind of defiance, the young club dancers throwing themselves into the act of movement, even the careful ritual of dining in an open street with the drum standing in for their table, certainly the amazing high-wire leaps of the ropewalker, reveal a kind of graceful opposition to the world which they inhabit, a world in which their survive through their performances, through these very personal acts of art. 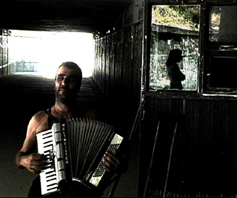 We enter an institution of art in this film only once, where we see a man wearing a costume of another being just like him, ritualistically battling it out with the other, wrestling with and tossing over and over the other and his own body. Askarian views the scene from the top, a spiral staircase spinning out below the camera. Is this his statement about the spiraling down, the inevitable need to wrestle with oneself to express a vision, in short, a failure, of formal art? As a noted filmmaker, Askarian clearly has known that struggle throughout his life.  The folk artists whom he primarily observes have no such dilemmas; their performances are simply part and parcel of the greater community, as natural as breathing in and breathing out.
Los Angeles, October 21, 2011
Posted by greenintegerblog at 7:34 AM