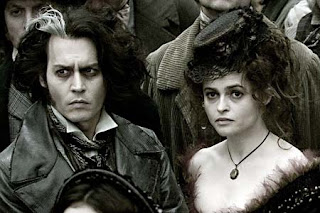 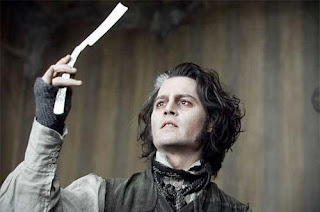 a hole in the world
by Douglas Messerli


My companion Howard and I saw the original musical Sweeney Todd, the Demon Barber of Fleet Street at the Uris Theatre in February 1979, during the last days of its previews. Angela Lansbury (as Mrs. Lovett) and Len Cariou (as Sweeney Todd) were unforgettable and haunted my memory for years, becoming one of my most beloved Broadway memories.
We also saw the PBS production of September 12, 1982, and although we have been unable to track it down in our collection, I believe we once had a tape of that production.
Accordingly, I attended Tim Burton’s film adaptation (screenplay by John Logan and musical adaption by the original author of this version, Christopher Bond) on Christmas Day 2007 with some trepidation. From the first moments of the film, wherein Sweeney Todd (Johnny Depp) and Anthony Hope (Jamie Campbell Bower) step off the ship which has taken them from Australia to London, I felt relieved as it became immediately clear that although Burton had radically changed the focus and tenor of the work, he had retained its operatic-like con-ventions and re-mained loyal to Sond-heim’s dark paean to love and revenge.
Burton has long been aware of the basic differences be-tween stage and film, comprehending that film, in its immense magnification of char-acters and scene, does not always survive theatricality [the reader should note that I personally prefer the theatrical in film; see my essay “Two Theatrical Films” in My Year 2004]. Accordingly, the director moved his camera into the dead center of each room, presenting the bizarre characters (Todd looks like a male version of the Bride of Frankenstein and Mrs. Lovett appears somewhat as a decaying Raggedy Ann doll) face on, giving them a sense of intimacy which neutralizes their bizarre costumes and physiques.
This has the understandable effect of displaying their horrific actions of murder, greed, and cannibalism in a more realistic context; while the stage musical stylized Todd’s throat-slitting shaves with a loud whistle and bang as each victim was sent on his way to the ovens below, in Burton’s always darkened landscape we cannot ignore the bright red blood that spurts out from their necks as we painfully watch the bodies slide into the hellish ovens beneath Todd’s tonsorial tower. The film, accordingly, visualizes what the musical more often suggested, transforming Sondheim’s lighter musical fable into a terrifying peep into a sickened Dickensian world.
Todd sees all of London as a hellish hole in the ground:
There’s a whole in the world like a great black pit
and the vermin in the world inhabit it
and its morals aren’t worth what a pin can spit
and it goes by the name of London.
At the top of the hole sit the privileged few
making mock of the vermin in the lonely zoo
turning beauty to filth and greed….
Sweeney has, as Mrs. Lovett puts it, turned “barking mad,” and there is little to hold him from transferring his hatred of his intended victims—Beadle Bamford and Judge Turpin, who have destroyed his life and taken from him his daughter and wife—to the world at large. As the Judge escapes, Todd, accordingly, lashes out at the whole word, including himself, shifting in one stanza from “They all deserve to die” to “We all deserve to die.”
While Burton’s more intimate approach certainly shifts the focus of Sweeney Todd to the dramatic actions of its characters, it also bleeds almost all humor from the work. One would only wish that, if only for a brief moment, Depp could call up from his grimacing frown a bit of the childish wonderment of his Ed Wood or a twinkle of camp behavior of the pirate Jack Sparrow. Comic songs such as “The Worst Pies in London” and “A Little Priest”—presented in this realistic context—lose much of their energy and nearly all of their satiric wonderment. It’s clear that, while on stage one might be able to sit and share one’s desire to “visit the sea,” in Burton’s version the ever-moving camera literalizes what in the original musical was imaginative leap of possibility. For me the Benny & Joon-like* antics make “By the Sea” a nearly unbearable place to be.
Burton’s focus on the actions of Sweeney’s razor steals from us any possibility of seeing him merely as an innocent destroyed by the society around him; by film’s end we can only comprehend him as a mad murderer caught up in a tragedy of revenge. And without the broader comic redemption of Angela Lansbury’s Mrs. Lovett, Helena Bonham Carter’s character becomes perhaps the deepest villain of the piece, a woman who without even Todd’s justification is readily willing to feed up human flesh to the citizens of London and is wilily able to ponder killing the boy Toby at the very moment of offering her in song his protection of love (“Not While I’m Around):
Nothing's gonna harm you, not while I'm around.
Nothing's gonna harm you, no sir, not while I'm around
Demons are prowling everywhere, nowadays,
I'll send 'em howling,
I don't care, I got ways.
No one's gonna hurt you,

No one's gonna dare
Others can desert you,
Not to worry, whistle, I'll be there.
Compared to these treacheries, Todd’s vengeful dance with her into the oven because she has lied to him about his Lucy seems to be a personal moralistic piffle.
These very shifts in the story, however, only enrich the tale of Sweeney Todd. While we may miss the devilish merriment of the stage musical figures, Burton’s filmed opera (my friend Howard counted only 10 moments of any extended spoken words in the whole of the work) ultimately brings forth a whole new series of intriguing questions.
While one was willing to suspend belief concerning many issues of the original Sondheim stage work, Burton’s more realistic presentation gives rise to great gaps in logic. Why, for example, in all the time that Sweeney has been imprisoned in Australia—15 years we are told—has the Judge not before imposed himself upon his young charge, Johanna. Having raped her mother, are we supposed to believe that he has had any qualms in molesting the minor? How, moreover, has Lucy survived all this time on the streets of London, a world presented nearly as cold and dark as a post-holocaust landscape? Did it truly take all those many years to drive Todd mad? And when and why did Mrs. Lovett arrive upon the scene? How, making the worst pies in London all this long while, has she and her establishment survived? Most of these questions, obviously, lie outside the fable itself, occurring as the many layers of this tale accrued in the variant versions from 1846 on. We have little choice, accordingly, but to understand the characters and their actions as having grown out of a fabulous void, a kind of hole in time, a great standstill that needed the return of Todd and the arrival of his innocent friend Anthony Hope to oil up the gears of the awful machine of hate and reaction that destroys each generation. By the end of this bloody tale the young Toby has become a murderer and Hope and his lover Johanna have become entwined in the savage deaths of nearly everyone around them. What, we wonder, will be their legacy 15 years hence?
___


*Ed Wood was a character portrayed by Johnny Depp in Burton’s 1994 film by that name; Jack Sparrow is Depp’s character in Gore Verbinski’s three-part saga Pirates of the Caribbean (2003-2007); in Benny & Joon (1993) Depp plays a mentally-disturbed young man who models himself on comedian Buster Keaton.
Los Angeles, January 1, 2008

Reprinted from Nth Position [England] (May 2008).
Posted by greenintegerblog at 9:15 AM