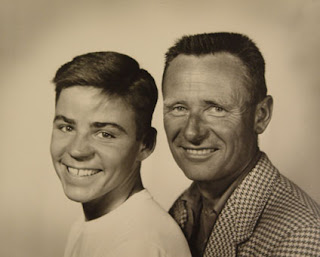 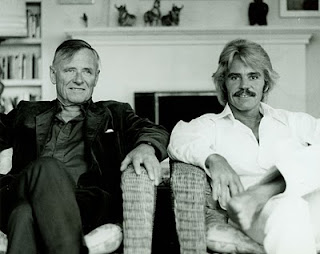 DYING WITH CHRIS
by Douglas Messerli

As I was editing the piece above for the 2002 volume, a documentary titled Chris & Don. A Love Story appeared in the theaters. Howard and I attended a matinee in 2008.

The movie was a touching tale of Isherwood’s and Bachardy’s relationship from their first meeting at Will Rogers State Beach in October 1952 to the time of Isherwood’s death of prostate cancer in January 1986. What both Howard and I immediately perceived was the intense self-consciousness of their relationship from the start, an inevitability, perhaps, since the two men were an openly gay couple in a period that was often intolerant of homosexuality, and, more impor-tantly, they shared an age difference of 30 years. Bachardy, moreover, looked so boyishly young with his crew cut hair and gap-in-the-tooth grin that the relationship might easily be interpreted as—and may have symbolically been (Bachardy was, in fact, 18 years of age)—a kind of pedophilic encounter. Even Isherwood’s landlord, the psychologist Evelyn Hooker, whose research helped shift the medical field away from seeing homosexuality as a mental illness, could not tolerate the young Bachardy living with Isherwood in her guest cottage! Others in Hollywood were more outwardly hostile.

Yet Isherwood’s astounding connections with the Los Angeles elite—including figures such as Igor Stravinsky, Bette Davis, John Ford, Joan Crawford, Montgomery Clift…the list of his friends is extensive—meant a new and exciting life for the young boy, although Bachardy also recognized each evening, as they returned home from events, that he was perceived of as just a pretty thing attached to his lover. As I have mentioned several times in these volumes, it mattered little when I came to Los Angeles that I had a PhD and had been a university professor; as the Contemporary Art Curator’s “lover,” I might as well have been a homeless man.

Bachardy admits throughout the film to having been “made over” by Isherwood, following his advice on everything from clothing to social behavior, going so far as to assimilate Isherwood’s British accent. Even the choice of his career, a portrait artist, was suggested and encouraged by his lover-cum-father. It is amazing, accordingly, that this couple had as few problems in their relationship as they had—although the rift between them in the early 1960s evidently led Isherwood to consider what life might be like as “a single man”—concerns expressed in his fiction of that title in 1964.

My only complaint about the Guido Santi and Tina Mascara tribute to the two men was the dramatization of several scenes by actors, which, combined with the reels of actual early film footage taken of Isherwood and Bachardy, led one to believe that he was witnessing an actual event instead of an enactment. Do we really need to see a blurred couple holding one another upon a bed to understand Bachardy’s terror in being overdrugged by Paul Powles in Tangiers? I also could have done without the cartoon animation involving the two animals by which the couple characterized themselves, a horse and a pussycat.

But, particularly in the last scenes concerning Isherwood’s death, where Bachardy tearfully tells of the time when he devoted himself to caring for the author, while also daily sketching him, we comprehend the depth of their love, as the artist describes his actions as a kind of “dying with Chris,” going so far as to sketch Isherwood’s corpse.

Given both Isherwood’s and Bachardy’s love affair with the camera—in his youth, Don and his brother Ted appeared at Hollywood openings in suits, snapping pictures of each other with the stars—it is perhaps understandable why, in the Fall of 1985 when I met these men, at a time when Isherwood knew of his prostate cancer and complained his body was betraying him, preparing him to die, he had grown tired of being photographed. Was Bachardy drawing him daily even then? Clearly, Chris was no longer interested in either being a camera or being the subject of it.