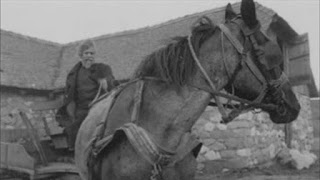 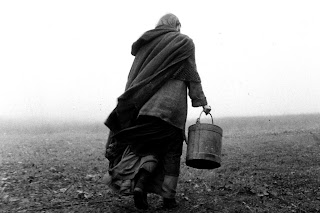 
Tarr's great farewell to cinema direction begins with a kind of prologue, telling the story of Friedrich Nietzsche's movement into madness:


In Turin on 3rd January, 1889, Friedrich Nietzsche steps out
of the doorway of number six, Via Carlo Albert. Not far from
him, the driver if a hansom cab is having trouble with a stubborn
horse. Despite all his urging, the horse refuses to move,
whereupon the driver loses his patience and takes his whip to it.
Nietzsche comes up to the throng and puts an end to the
brutal scene, throwing his arms around the horse's neck,
sobbing. His landlord takes him home, he lies motionless
and silent for two days on a divan until he mutters the oblige-
tory last words, and lives for another ten years, silent and
demented, cared for by his mother and sisters. We do not
know what happened to the horse.

The story that follows is not the story of Nietzsche's horse. This horse leads only a small peasant cart, not a hansom cab. And the action of Tarr's film clearly takes place on a small Hungarian farm, where the nearest town is miles off. The prologue merely sets the tone of Tarr's darkly brooding tale, filmed in black and white, the kind of life that the driver of the Turin horse might have lived were we able to follow him home.


From the very beginning of Krasnahorkai's and Tarr's bleak story, a wind storm has suddenly come up, as the peasant Ohlsdorfer (János Derzsi) pulls both horse and cart for the final few miles home. Home is stone barn and house with only the most rudimentary of pieces of furniture: two beds, a large table, a stove which is constantly afire, a work bench, and little else. The floor is dirt.


The moment Ohlsdorfer enters the yard, his dutiful daughter (Erika Bók) appears, almost ritualistically helping him to unharness their horse, before leading him into the barn, where she serves him up a meal of straw. With her father, the two open the larger doors to the barn, wheeling the small cart into place therein.


When the two return to the house, the wind ceaselessly blowing up a torrent of leaves and other matter, the old man stands passively, as she, piece by piece, undresses him down his underwear and redresses him it what will be his housewear, the clothes which he will also wear to bed. During this process we gradually perceive that the older man is crippled in his right arm and hand, the reason for his daughter's participation in dress.


She then puts two potatoes into a pot of water, cooking them until they are edible. Together the two sit, with only a salt cellar and their plates of potatoes upon the table, peeling away the potato skins with their fingers, breaking the potatoes into smaller pieces, and eating them hot, blowing from time to time on the potato pieces to cool them so that can put them into their mouths. This "potato-eating" scene is repeated again and again in Tarr's film, revealing not only their extraordinarily limited diet, but the horrifying repetition of their lives. Together they live a life not much better than cave-dwellers.


The wind continues, and both father and daughter are nervous about the unusual event. For the first time in their lives they cannot hear the sound of the wood worms, a strange phenomenon which neither can explain. Not much else is spoken. These two live in silence, with only a few commands coming from the father's lips. "Go to bed," etc.

The next morning, their routine is made even more apparent, as the daughter, after dressing and quickly splashing water across her face, takes up two buckets, pushing through the whirling winds to the well, where she cautiously fills them before covering over the well and returning to the house. After the reverse of the ritual of the evening before, stripping her father of his house clothes and dressing him for the outside, they quickly drink a swig of brandy before retrieving the horse from the barn, pulling out the cart, and carefully hooking the horse up to it—the endless wind blowing their hair and other debris across their vision. This particular morning, however, the horse will not budge. Like the Turin driver, Ohlsdorfer grows angry and whips the animal, who still stubbornly refuses move. The daughter comes to the horse's rescue: "Can't you see she will not move?"


Their actions with cart and horse are repeated and they return to the house, she to do the laundry, he to work on a belt. The storm continues, worsening. And what continues might be described as a musical dirge for the remainder of their lives.


With only 30 long takes, Tarr repeats these actions, with very slight alterations, demonstrating the near total repetition and emptiness of their lives.  Over a period of six long days these two go about their chores—chores little different from the demands they have previously put upon their horse Ricsi—and, we soon realize, fruitlessly enacting patterns of a destitute lives. Occasionally something happens: a neighbor stops by for more brandy, prophesying the end of the noble and the good in the world. A band of gypsies drives to the well, pulling up the bucket for a free drink, whereupon the daughter and father chase them off. But little else but the slow enactments of their engrained patterns occurs. The cold prevents them from ever completely undressing; the lack of facilities results in no opportunities to bathe; there is no time for anything but to survive.


As the days move forward, however, so do some of their major resources begin to decline or disappear. The horse refuses to eat or drink, dying before their very eyes. The well suddenly goes dry.


As things grow worse, the father orders up the handcart , as they quickly pack up necessities, and, tethering the horse to the cart, move off across the landscape with the nameless daughter serving as the horse. We see them as they disappear from camera view, only to reappear, returning to the house. The wind has been too much for them to survive a trip into the nearby village.


Near the end of the film, everything is plunged into darkness, as their lamps, full of oil, refuse to light. Even the embers of the stove grow dim


The two sit at table, the father attempting to eat a cold potato, while the daughter frozenly looks down, like the horse, refusing to eat. The storm suddenly stops, but so too, apparently, do their lives. They too have died in harness.


In the AFI Fest showing of this film, several in the audience whispered how apocalyptic the film seemed, as the host asked Tarr about just such elements in all of his films, particularly in this one, which Tarr proclaims will be his last.


Tarr, an energetic and self-effacing man, laughed. "Look, the apocalypse always occurs with fire and brimstone. Do you see any of that in this film? No, this does represent the apocalypse, only life, where day after day we repeat ourselves, while things happen out of our control, and time gets smaller and smaller. This is life, not the end the world."


A member of the audience asked about how he was able to get the storm to so forcefully blow during the several days of shooting. Again Tarr laughed: "We used old-fashioned wind machines, but I asked the peasants from a local village to control them, and they did a far better job than film professionals. They knew the lay of the land."


For me, the most interesting answer was Tarr's reply to why he shot in black and white. His argument, summarized, was that it declared that this was not "real" life but the artist's vision. In short, he seemed to arguing for the theatricality that black and white allows. "And I like the palette, black, white, and all those grays in between. Here we are next to the Kodak building, the film makers with all of their too bright reds, blues, greens. It fits my vision."


Rankled by being asked again why he was giving up film directing, Tarr repeated, "I have had a great career, and done everything I wanted to try. And I have now come full circle. I want to keep that reputation in tact instead of just repeating myself, giving you more shit I've already finished with."


The theater, I might add, was filled, a third showing added to the schedule. "The sun is shining out there," Tarr pointed to the street, "so I am so appreciative that all of you have come inside to see my dark and windy film. Perhaps it is not a real film; maybe a little more or a little less."