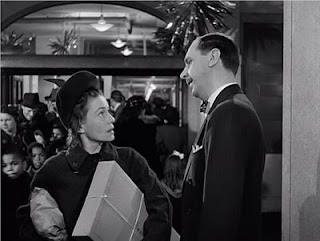 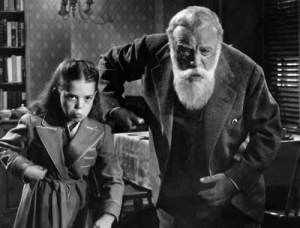 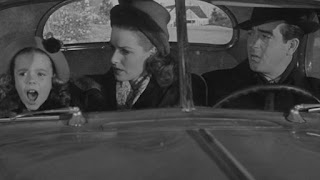 
…Christmas isn’t just a day, it’s a frame of mind…and that’s
what’s been changing. That’s why I’m glad I’m here, maybe
I can do something about it.


Kris even repeats the sentiments I stated earlier in this essay, disparaging the commercialism of the holiday—a strange thing for that emblem of the commercial to do; but it is clear the director and writer want to both ways.
Soon after Kris discovers that a beloved young janitor, Alfred (Alvin Greenman) has also been seeing the mean-spirited Sawyer, who suggests that Alfred has psychological problems simply for wanting to play Santa Claus at his neighborhood YMCA. Furious with the abuse of this good-hearted boy, Kris charges into Sawyer’s office, accusing him of malpractice and hitting him over the head with his cane. The violence Sawyer has predicted has, alas, become reality, and Kris is sent to Bellvue Psychiatric Hospital for evaluation, believing that Mrs. Walker has been behind the decision.
Despairing of the lack of faith she has shown, Kris purposely fails the psychiatric examination, and is destined to be locked away. Almost everyone knows the rest of the story, how Gailey takes on Kris’s case, fighting to convince a disbelieving world and court that Kris Kringel is truly Santa Claus. Even Mrs. Walker and her daughter come round to support his cause.
The case is miraculously won due, in part, to the political exigencies of court. As the Pol Charles Halloran (William Frawley) puts it to Judge Henry X. Harper (Gene Lockhart):

All right, you go back and tell them that the New York
State Supreme Court rules there’s no Santa Claus. It’s all
over the papers.The kids read it and they don’t hang up
their stockiings. Now what happens to all the toys that
are supposed to be in those stockings. Nobody buys them.
The toy manufactures are going to like that; so they
have to lay off a lot of their employees, union employees.
Now you got the CIO and AF of L against you and they’re
going to adore you for it and they’re going to say it with votes.
Oh, and the department stores are going to love you too and
the Christmas card makers and the candy companies. Ho ho,
Henry, you’re going to be an awful popular fella. And
what about the Salvation Army? Why, they got a Santa
Claus on every corner, and they’re taking a fortune.


So much for Kringel’s dismay for the commercialism of Christmas! Perhaps no clearer statement of the relationship of the fat, jolly, fellow and money has ever been made. Harper’s children even hate him, and Gailey calls the young son of District Attorney Thomas Mara to testify that his father has told, assuredly, that there is a Santa Claus.
Even more cynical are the US Postal employees, tired of all the unclaimed mail addressed to Santa Claus, who win the day for Gailey and Kris Kringel by forwarding dozens of sacks of letters to the courthouse, providing the Judge with an easy way out:

Uh, since the United States Government declares this man to
be Santa Claus, this court will not dispute it. Case dismissed.


So, insists Seaton’s film, Santa Claus, despite all evidence to the contrary, is alive and well. Yet Seaton and the original author go even further, demanding of even the adult characters and viewers their utter belief in the commercial emblem. When asked what she might like for Christmas, Susan pulls out an advertisement for a suburban Long Island home. Even Kris Kringel is a bit stunned by her demand, when he suggests, “…Don’t you see, dear? Some children wish for things they couldn’t possibly use like real locomotives or B-29.s.” Her retort is the stubborn insistence of any spoiled consumer:

If you’re really Santa Claus, you can get it for me. And if you
can’t, you’re only a nice man with a white beard like mother said.


The filmmakers hardly pause to take in the significance of what the child has just said, and within a few hours, Kris has sent the three traveling along a route that winds by the house of her dreams. Upon glimpsing it, Susan demands they stop and runs into the home as if she already owned it. How can Mr. Gailey and Mrs. Walker resist such a consumer dream, even if it means giving up their perfectly nice apartments, overlooking the parade route, and now worth millions of dollars? They will simply have to marry, move to the suburbs, and build on the little family with which they have begun. The discovery of Kris’s cane left near the fireplace convinces them surely—as “born again” Christian’s zealous rediscovery of Christ—of Santa Claus’ existence, just as the audience is bathed with consumer assurances that this is, in fact, the perfect house.
Perhaps never in the whole of Hollywood productions was there a more central pitching of consumer products. Even movies with thousands of “product placements” cannot match, Nathalie Wood’s answer to Kris’ question of where she had found the lovely sweater she is wearing: “My mother got on sale it at Macy’s.”
During an ad between events of this year’s Macy’s Thanksgiving Day Parade, Macy’s proudly quoted that line among other cinematic mentions of the august department store.
As Susan chants to herself: “I believe…I believe…it’s silly, but I believe.”


Los Angeles, Thanksgiving 2011
Posted by greenintegerblog at 7:29 AM