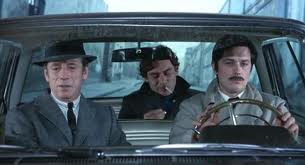 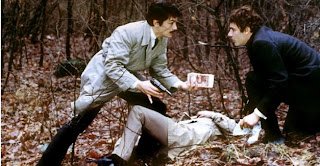 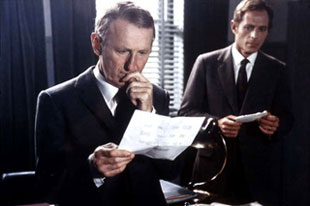 on cue
by Douglas Messerli

Jean-Pierre Melville (writer and director) Le Cercle rouge  (The Red Circle) / 1970, USA 1993
It is a somewhat shocking that Melville's great detective-gangster film did not get its USA premiere until 23 years after its French opening. So many similar but lesser films—including the entertaining The Hot Rock (1972)—might have learned a great deal from Melville's masterful direction. Like many a heist movie, much of Le Cercle rouge is devoted to the clever tactics of its robber-heroes, Corey (Alain Delon), Jansen (Yves Montand), and Vogel (Gian Maria Volonté).  But Melville takes his work much further by exploring, at least for the first half of the film, their abilities to outwit the police and others who might wish to stop them, while also taking us into the minds of their pursuers, particularly Le Commissaire Mattei (Andre Bourvil).
Much of the entire film is shot in silence, so much so that Le Cercle rouge might almost have been a silent film with just a few story board titles. Indeed the film begins with a kind of story board to explain its own title: