Pedro Almodóvar | The Skin I Live In 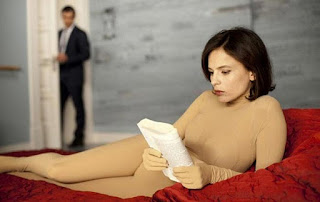 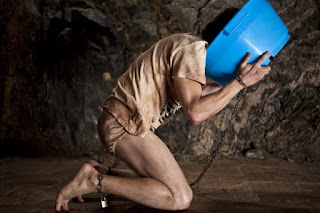 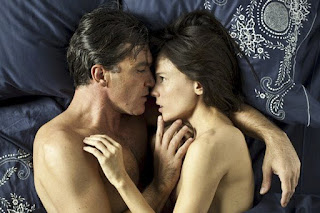 the i who still breathes
by Douglas Messerli


Influenced to a certain degree by Georges Franju’s elegant horror film, Less yeux sans visage Almodóvar’s langorous study of control over another being takes us into a secret world of a tortured Frankenstein who, with the advances of today’s science, can completely transform the human body. Much like Franju’s Doctor Génessier, Robert Ledgard, heading an isolated clinic and operating out of his house, has suffered the horror of seeing a wife severely burned in an automobile accident, evidently caused by his half-brother, the brutal and bestial Zeca, with whom she was having an affair. Through patient nursing and the attentions of her doctor-husband, the wife survives, but upon witnessing her burned shell of her body in the glass of a window, she leaps to her death.


Robert (Antonio Banderas) is left with a daughter, Norma, who never quite recovers from the shock of her mother’s death, and is unable to deal publically with other people. As Robert and Zeca’s mother relays the news early on in the movie, Norma followed the route of her mother, falling from a high window of the institute where she had been committed.


Although this information is summarized early on, we don’t actually see the events played out until after the director has introduced us to another, more mysterious figure, Vera Cruz (Elena Anaya), a beautiful woman kept locked up in Robert’s home. We see little evidence of any outward operations—and certainly none of the masks and late night activities of Franju’s film. But we do know that, like the Dr. of that work, Robert has experimented on skin transplants, and we can only suspect that Vera has been at the center of his attention.


He has, so it is hinted, made over the imprisoned girl somewhat in the image of his dead daughter, a fact for which his mother, serving as the head of house and cook, despairs. Now that he has finished with her, she suggests, he should destroy her instead of keeping her locked away in a room where she reads, exercises, and, occasionally, writes upon the walls. She is a dangerous being.


We recognize some of that potential danger when Zeca shows up at the house on carnival night, dressed, absurdly, as a tiger, demanding that his mother hide him for a few days since he has just been involved in a heist. The mother, Marilia (Marisa Paredes) is outraged and quickly rejects any such suggestion, and, accordingly, is tied up and gagged by her son. Glimpsing the young lookalike Norma on a television monitor, Zeca—a bestial figure if there ever was one— frantically searches the house for the girl, and finding the room, rapes her, Vera, strangely enough, both accepting the brutal action and crying out in terrible pain.


Robert, returning home mid-rape, rushes to the room to shoot his half-brother dead, while his mother below, screams out that he should kill them both.


What follows is even stranger, as a sexual relationship suddenly develops between Robert and Vera. And after he has destroyed Zeca’s body, he returns to her bed. The implications are frightening: if she indeed looks like his daughter, has he been sexually involved with his daughter as well? We are never given an answer, but we sense something grandly amiss.


Almodóvar—as the director of Women of the Verge of a Nervous Breakdown and other comedies—has often been described as creating a frenetic or, at least, hectic pace in his works. But here he almost lugubriously takes us back in time, retelling some of his tale, and, in so doing, revealing new truths that are even more frightening than those we already suspect.


Although she has had a difficult time with social relationships, Robert takes his daughter to a pre-wedding party, where the young Norma seems to be acclimating herself well to other young women her age. Suddenly, however, many of the younger generation seem to be missing, and following their tracks, Robert finds a group of them, boy and girls, in the middle of woods, engaging in group sex. His daughter is nowhere in sight.


We have already been introduced to a young man, Vicente, who works as a window dresser in his mother’s second-hand dress shop. He has asked for the young shop assistant to go with him to the party, but she turns him down, evidently being more interested in women than in men. When he suggests she put on a dress he is displaying, she disparagingly suggests he wear it himself. The suggestion is that he may be gay, but he scoffs at her suggestion.


When he shows up at the party he has already ingested—as have the other young people—a substantial amount of drugs. Meeting the young Norma, he lures her into the out-of-doors, asking her what drugs she has taken. Innocently, she reports the numerous drugs she is being proscribed for her psychological condition, while he interprets it in his own way:


Vicente: You are different. I am different as well.
Norma: Are you in therapy, too?


She, he is convinced will be a willing participant in his sexual experiment. As he takes off into the woods to have sex, she grows frightened, screaming out, to which he responds by trying to silence her, slapping her as he attempts to take her. She passes out, and he, horrified, quickly redresses her and disappears from the event. Robert comes upon her at that very moment, observing the boy on a motorcycle speeding away.


After the attack, Norma’s condition worsens. Locked away in a sanatorium, she appears to grow sicker, hiding from her father upon each of his visits. It can only confirm our earlier suspicions; she has associated the young rapist with her own father. He is asked to no longer visit her, and soon after, as Marilia has already told us, she jumps to her death.


Only a few frames later, the young handsome Vicente is kidnapped and chained in a dark space for several days, fed only water and a little rice. We comprehend Robert’s sense of revenge, but why, if it is him, is he torturing the youth? What might possibly be gained?


Perhaps his mother, has said it best when she observed: “The things for love a madman can do!"

One of the most eerie scenes of the film occurs when we observe Robert spraying a hose over the filthy Vicente, convinced he is about to be murdered. Gently and patiently, however, the handsome Robert almost lovingly shaves the young man who, we soon discover, is about to undergo an operation. We can only suspect the worst, but when the boy has awakened from the surgery, we discover something even beyond the expected castration. He has replaced the boy’s genitals with a vagina, producing various sizes of dildo’s with which the boy is ordered to practice in order to help heal the crevice.


Without a few months, Robert has completed the sex change, as we witness the young beauty, now Vera, after the transformation. Against his will he has been made over by another from a man into a woman. At first, the patient lashes out in rebellion filling the walls with words and numbers, dates of changes on his body and the statement, over and over: “I breathe. I breathe. I breathe. I know I breathe,” as if his very respiration, sign of his survival, were a reiteration of the Decartesian principle, “I think, therefore, I am.”


We already know what happens, but its meaning haunts us in a new way. Was Vicente truly gay all along, unknowingly seeking the very transformation that has been forced upon him? What kind of man is Robert, who must transform a boy into the woman of his desires? The implications, although Almodóvar does not explore them, are immense. Who are these men or women, including Robert’s terrifyingly collaborationist mother? Perhaps she has no other choice, but Vera now agrees to never run away. It is like a vow of marriage, which the strangely naïve Robert readily accepts.


Vera-Vicente even makes a trip with Marilia into town, but when Robert and she attempt sex after her return, she insists that she has bought a lotion, which she briefly leaves the room to retrieve. Upon her return she has brought his gun, shooting him at close range near the heart. His almost poignant shock at the turn of events reveals his insanity:


Robert Ledgard: You promised not to run away.
Vicente: I lied.


As Mirilia climbs the stairs, gun in hand, to check out the situation, she too is shot by the victim.


If the final scene of Vera-Vicente’s return to his mother’s dress shop seems almost banal, it is simultaneously an expression of immense courage and resilience, as the young woman proclaims to his mother his true identity: Soy Vincente.