waking up
by Douglas Messerli


Archie Lee Meighan (Karl Malden), owner of a failed cotton gin and a collapsing antebellum mansion, "Tiger Tail," is also encumbered with a wife, Baby Doll (Carroll Baker), who behaves according to her name. In an early scene we are told that the next day she will turn twenty, but this sexy blonde seems, in demeanor, more like she was ten. Archie has been married to her for two years, but has still not had sex with his wife, having made a ridiculous bargain with her father that he will not touch her until she turns twenty.


As the movie begins we see this poor loser of a man crouching down to peer through a hole in the wall where he sleeping wife lies, dressed in what is now called a "baby doll dress," the kind of dress worn by dolls, lying in a crib sucking her thumb. Frustrated with the narrowness of view he attempts to enlarge the peep hole, only to have the wall crumble, awakening the sleeping girl who immediately sets the tone for the movie-long treatment of Archie:


Baby Doll: Archie Lee! You're a mess. Do you know what they
call such people? Peepin' Toms!
Archie: Hey, there's no need for a woman that sleeps in a
baby's crib to stay away from her husband...
Baby Doll: No, I'm gonna plug up the hole in that wall with
chewin' gum.


The hilarity of this scene, of the situation of its characters, and, as we later perceive, the numerous absurdities of Kazan's film encourages one to break out in a hoot, which is what I certain Williams' must have done after finishing the script. What he had concocted was a highly sexually suggestive movie that involved nothing more than a kiss and a slap. 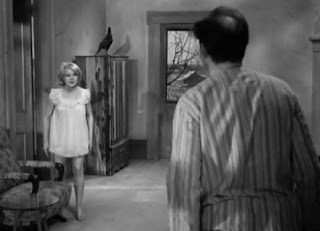 Yet the moral enforcers of the day were outraged. The Roman Catholic Church through a sermon by Cardinal John Spellman described the movie as "revolting" and "morally repellant," concluding: " "In soliciture for the welfare of souls entrused to my care and the welfare of my count, I exhort Catholic people to refrain from patronizing this film under pain of sin" Time magazine described the work as "just possibly the dirtiest American-made motion picture that has ever been legally exhibited," while at the same time, admitting "Baby Doll is an almost puritanically moral work of art." Huh?


What Baby Doll really is perhaps depends on your own imagination or maybe lack of imagination. For in truth, while the film is forthrightly sexual, it portrays no sex, and, despite the pretense of the young virginal heroine, she has long been of marrying age. Perhaps the most perverse aspect of the film is that Baby Doll has been matrimonially joined to such a human lump.


Malden plays Archie as a bigoted, insensitive and violent brute right out of a Faulkner novel. In fact, like Abner Snopes, Archie, angry that Sicilian business man Silva Vacarro (Eli Wallach) has built a modern cotton gin—taking away almost all of Archie's former business—burns down Vacarro's operation.


It is Vacarro's retaliation for that burning (he has found the kerosene can with which Archie has started the fire) that becomes the center of the film, and that apparently leads some people she perceive the metaphorical rape as a real one.


Perhaps the disapproving audiences of this film were convinced of the work's raw sexuality through the consummate acting of  Wallach and Baker. Like a strutting cock Wallach enters the Meighan home as if he owned it, acting the role of a southern gentleman to Baker's pouting household incompetence. If it is outrageous that a twenty year old should still behave like a baby, it is even more absurd that the Brooklyn born Wallach should have been chosen to play the Sicilian southerner, but that—along with Madden's northern-bred growls (Madden was born in Chicago to a Serbian- and Czech-born father and mother)—that grounds this film in the theater of the ridiculous. Baker, imitating another southern character type, the permanently virgin wife, and Wallach race through the now-empty mansion—the furniture having been recently repossessed—as if they were playing a children's game like "hide and seek." Except, in this case, we know the stakes for both are much higher than simply being "found." It is clear that both Wallach and Baker enjoyed their scenes, he advancing only to retreat, she running away while trying to lure him closer and closer.


The revelation of her and Archie's relationship—which further encourages Vacarro to move in on his prey—is one of the most humorous comic scenes of Williams' numerous comic writings:

Baby Doll: I told my Daddy that I wasn't ready for marriage. My
Daddy told Archie Lee that I wasn't ready for it and
Archie Lee promised my Daddy that he would wait
till I was ready.
Silva: Then the marriage was postponed?
Baby Doll: Oh no, not the weddin', we had the weddin', my Daddy
gave me away.
Silva: But you said Archie Lee waited?
Baby Doll: Yeah, after the weddin'....he waited.
Silva: For what?
Baby Doll: For me to be ready for marriage.
Silva: How long did he have to wait?
Baby Doll: Oh he's still waitin'. We had an agreement though, I
mean, I told him, that on my twentieth birthday, I'd
be ready.
Silva: That's tomorrow?
Baby Doll: uh-huh.
Silva: Then uh, will you be ready?
Baby Doll: Well, that all depends.
Silva: What on?
Baby Doll: Whether or not the furniture comes back—I guess...
Silva: Your husband sweats more than any man I know, and now
I understand why.


Ultimately, dressed only in a negligee, she locks herself away in the attic, trying to "give up" the game. But Vacarro will not leave, threatening to break down the door (and, presumably, rape her) if she does not come out and sign a piece of paper that Archie was responsible for the fire. Her virginity is kept intact. And Silva, exhausted from his game of seduction, falls to sleep in her crib, Baby Doll, singing him a lullaby and stroking his hair.


Returning home to find Silva in his house, Archie can only suspect the worst, and attempts to fight him. But Silva returns the threat by revealing that he knows Archie has been responsible for the fire, while, nonetheless, suggesting that they make an arrangement. He will send customers to Archie's gin for a percentage of the profits and regular visitations to the house; in short, he proposes a sort of three-way relationship, which he describes as "the Good Neighbor Policy."


Baby Doll invites him to supper and three sit down to eat a pot of collard greens which Baby Doll's Aunt Rose (played with delightful lunacy by Mildred Dunnock) has forgotten to cook. In his fury Archie turns on Rose, threatening to send her away, while with obvious relish Silva and Baby Doll slurp up bites of the green mess:


Archie, also crazed by the now public seduction of his wife, hurls a piece of glass from a nearby chandelier at them, claiming that he will handle "the situation" by calling up his friends.

roof. Oh, look her now, oh, I'm not such a marble-
missin' old fool that I couldn't size it up. I sized it
up the minute I seen you was still on this place
and her, her—with that sly smile on her? And you
with yours on you.! I know how to wipe off
both those sly...


Silva denies any sexual activity, and shuts Archie up with the revelation that Baby Doll has signed a confession of Archie's guilt. 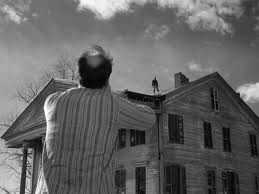 Driven into even greater fury he slaps (off-camera) Baby Doll and sets out to find the suddenly missing Silva and shoot him. Silva has retreated to a nearby pecan tree, as Baby Doll, enraged by the slap insists it will be the last time Archie lays a hand on her, as she calls the police. As Archie storms through the house in search of Silva, Baby Doll sneaks into the pecan tree as well, while Archie, finally breaking down with remorse, calls out her name in a manner similar to Marlon Brando's scream for Stella in Williams' A Streetcar Named Desire. Soon after, Silva drives off, promising he will be back the next day.


The police arrive to haul Archie off, putting him into handcuffs, while he asks "...What happens tomorrow?" The policeman's ambiguous answer—"Well, the town marshall has no control over tomorrow"—is paralleled by Baby Doll's own fears for her future, saying to her aunt:

He's comin' back tomorrow with more cotton...We got nothin' to do
but wait for tomorrow and see if we're remembered or forgotten.


Either way it will be a strange new world into which she and her aunt are about to embark, a world which suddenly requires her to wake up as a adult.