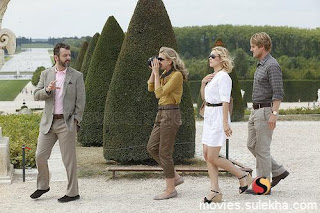 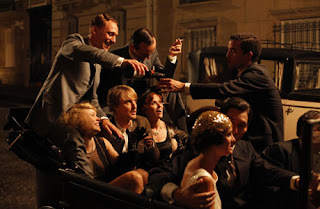 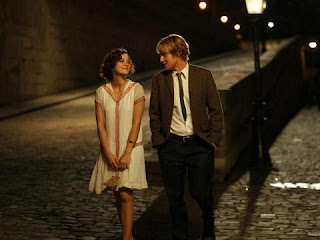 into the past
by Douglas Messerli


Woody Allen's romantic valentine to Paris, Midnight in Paris, is also his least intelligent film in that it presents the simplest of concepts embellished with the clichés of American Literature and Art History 1. For all that, there is something charming, almost magical about the flick, and despite what I'm about write below, most people will come away from the film having thoroughly enjoyed it.
We should start with the successful aspects of this fable. Although Allen is best known, perhaps, for the stories he tells and the "Woody Allen-ish" slightly screwball way of seeing the universe, he is also, in fact, a talented cinematographer working with gifted lighting designers. He is particularly brilliant with interiors such as those of Hannah and Her Sisters. Here, however, he brings a glow to the City of Light that one seldom witnesses in Paris itself. The city is always beautiful, but in Allen's hands—beginning with a long prologue which takes us across much of the urban landscape—it becomes a glowing gem that on a sunny day absolutely radiates in the way Rome sometimes does, and on a rainy night sparkles in a rainbow of colors reflected in small puddles. Wherever Allen takes us, it is so beautiful that we readily agree to the tour, particularly when the hero, Gil (Owen Wilson), travels back into the literary and art world of the 1920s. Much of this film, in fact, is concerned with tourist activities, as we visit Versailles, see Rodin sculptures, discuss paintings by Picasso and Matisse, and drop in at various antique shops. It is as if Allen was determined to take his audience on a small tour of the grand city, pointing out its wonders as we join him.
If only the pedantic and braggadocio Paul (Michael Sheen) and the arch-conservative waspish prigs Helen (Mimi Kennedy) and John (Kurt Fuller) would stay home!  And then, of course, there is their daughter, Gil's contrarian fiancée, Inez (Rachel McAdams) who has so little in common with her lover that one can see their relationship is doomed from the start, and who gushes with enthusiasm over Paul, in Paris with his wife to lecture at the Sorbornne. Gil, who makes a good living by writing for Hollywood movies, feels that he is nothing more than a hack, and is attempting to change all that by writing a novel. A romantic, in love with the 1920s, he would like to remain in Paris, while Inez, whose parents are wealthy, wants Malibu for an address.
In Owen Wilson the director has found a perfect stand-in for Allen himself, whose nasal, Wilson's Texan twang nicely ricochets off of Allen's New Yorker whine. At times, the script comes dangerously close to Wilson's own personal history. While he could never be described as a hack, Wilson has acted in and written works that, it is evident, represent far less than his talents, and his love affairs have, apparently, left him depressed, resulting in rumors of an attempted suicide. Almost channeling Allen, Wilson creates an appealing fool that is behind nearly every one of the director's "heroes."
But here the "charm" disappears. For the rest of the film, in the manner of the dislikable Paul, spews out pedantic-like statements that summarize Allen's simple theme and even simpler way of presenting the imaginary worlds into which his character enters.
Gil, quite clearly, would like to live in the past, a phenomenon which Paul summarizes:

Nostalgia is denial—denial of the painful present...the name for
this denial is golden age thinking—the erroneous notion that a
different time period is better than the one one's living in—it's a
flaw in the romantic imagination of those people who find it
difficult to cope with the present.
So here is Allen's theme, which the rest of the film will obviously play out. After a wine-tasting party, Gil, slightly drunk, determines he will not join Inez and her friends, Paul and Carol, who intend to go dancing. He walks the streets before becoming lost and sits down for a rest while a nearby clock strikes midnight. A 1920's car suddenly turns the corner as its inhabitants, drinking heavily, noisily invite him to join; they are on their way to a party. Once he has reached the event where everyone, it appears, is dressed in costume, Gil begins to perceive something is amiss. His friends, the Fitzgeralds, are named, just like the famous couple, Zelda and Scott. At the piano sits a man singing Cole Porter songs who looks very much like Cole Porter. Other famed celebrities of the period pass by. When Fitzgerald later takes him to a bar where he meets Ernest Hemingway, Gil realizes he has somehow entered a "twilight zone," that he has magically returned to his beloved past.
Paris, in fact, is, as my poet friend Jerome Rothenberg once described it, a "living museum." Everywhere one goes in the city, there are small plaques reminding one of the famed figures who once lived or worked within. The city's several cemeteries, filled with the remains of renowned men and women, are regularly visited by both tourists and Parisians. I've been to all of them.
The problem is that Allen's vision of the past is as empty as Paul's pedantic speeches. One by one many of his characters speak dogmatic statements that sum up the vision of college freshmen English texts. Here's Hemingway (Corey Stoll), for example, speaking of his own book:

Yes, it was a good book because it was an honest book, and
that's what war does to men. And there's nothing fine and
noble about dying in the mud unless you die gracefully. And
then it's not only noble but brave.
Kathy Bates' Gertrude Stein seems to me more of a domineering scold than a great conversationalist; nothing is even mentioned about her being a writer. Other figures are names only: Djuna Barnes, T. S. Eliot. At least Cole Porter (Yves Heck) gets to sing, and Dali (Adrien Brody), in describing his Persistance of Memory (not painted until 1931), is humorously fixated on rhinoceroses. It is not even the fact that these people of the past are stick figures; perhaps that is the way Gil sees literary and art history. But by filling the most magical moments of the film with pop-up stereotypes, we quickly lose interest in Gil's nightly transformations. Few of these ghosts are figures any of us might wish to meet. Having met with and talked to Barnes—like Stein, a witty and imposing conversationalist—I cannot imagine her as a Charleston dancer of whom Gil quips "she wanted to lead." These sort of silly one-liners drain any wonderment from the fantastical events. Only the lesser renowned Adriana (Marion Cotillard), Picasso's mistress, has any flesh and blood about her, and it is natural, accordingly, that Gil falls in love with her.
Now truly torn between past and present, Gil must choose between his two loves: while it increasingly becomes apparent that he is not truly in love with Inez, how can he really embrace a woman living 90 years before his time? Besides that, for her the Golden Age is not her own generation but la Belle Époque, and while sitting one night in a cafe, the couple are magically invited to join people in a horse-drawn carriage. Together they attend a performance of the Can-Can at the Moulin Rouge, meeting, this time round, Henri de Toulouse-Lautrec, Paul Gauguin, and Edgar Degas. Asked to design costumes for a play, Adriana takes Gil aside, suggesting they stay in her golden era. Finally coming to terms with his own "golden age thinking," Gil realizes he must face the present, while she is determined to remain in an even more removed past.
But first, he must take one last trip into the 1920s, where Stein, again with evaluative pronunciamentos, declares Gil's novel to be of value—although Hemingway (who has also now read it) does not understand how its major character would not perceive that his fiancée is having an affair "right before his eyes."  The suddenly pained Gil turns away, suggesting "that might be described as self-denial."
The inevitable moment arrives, as he declares he is staying in Paris and leaving Inez, her father revealing that he has had Gil followed. Each night the detective has observed Gil getting into a car, but the detective himself is now missing. We see him at the Court of Louis XIV, being chased by guards our of Versailles.
In all his walks about Paris, Gil has fortunately met another woman, this one working in an antique shop that sells Cole Porter recordings. Gabrielle (Léa Seydoux) accidently meets the down-hearted Gil walking along the Seine. It begins to rain, but like Gil, she enjoys walking in the rain, just as she loves her native city.
Los Angeles, January 3, 2012
Reprinted from Nth Position [England], (January 2012)
Posted by greenintegerblog at 9:12 AM