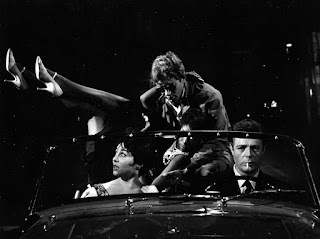 a state of enchantment
by Douglas Messerli

Federico Fellini, Ennio Flaiano, Tullo Pinelli and Brunello Rondi (screenplay, Pier Paolo Pasolini [uncredited]), Federico Fellini (director) La Dolce Vita / 1960, USA 1961
Fellini's great La Dolce Vita is less a forward-moving narrative with plot attached than it is a series of basically disconnected episodes, 7 days and 7 nights, each related somewhat to the others, as we watch the gradual disintegration of our "hero," Marcello Rubini (Marcello Mastroianni), a reporter covering celebrities and sensational events. To read Fellini's work one has to be fluent in numerous film genres, including neo-realism and documentary, political caricature, Fellini's own kind of Italian magic-realism, meditation, and a simple love story.
Over the few days in which we follow Rubini's activities, he is pulled—one might almost say "ripped apart"—by the intense love of Emma (Yvonne Furneaux) and the warm intellectualism of his friend Steiner (whose house we later visit for a friendly, if sometimes absurd and shallow, party of self-declared intellectuals) and the pointless and self-deluded love and parties of the wealthy (most clearly represented by Maddalena [Anouk Aimée] and the actress, Sylvia [memorably portrayed by Anita Ekberg]). On the one side is intelligence, concern for others, and spiritual belief (Emma is moved even by the lie of two children who have claimed to see the Madonna); on the other is a series drunken nights in villas and stranger's houses, wherein the characters act out their sexual desires while seldom obtaining them.
The tension between the two is played out by Fellini from the very first image of the film, a flying Christ which helicopters are taking to the Vatican as the drivers buzz down upon three beautiful women sunbathers to see if they can obtain their telephone numbers. The sacred and the profane are clearly at war in the enchanted city of Rome.
The Vatican officials who believed the image to represent the second coming of Christ, were outraged by Fellini's early scene. But in fact, although the grounded figures of this film, Emma and Steiner, suffer, the empty party-goers whom Rubini joins night after night, are at the center of Fellini's satiric focus. Through the episodes, their revels grow stranger and stranger, as they move from simple apartments, restaurants, clubs, and late-night tours of the city, into castles owned by aristocrats  (filmed at Bassano di Sutri outside of Rome), and, finally, a beach house. At the final bacchanal, true sexuality has so disintegrated that Rubini breaks down into a kind of would-be savage, tossing chicken feathers at the body of a woman whom he mounts as if he might ride with her into the sunrise.
Any love that has previously been proffered—whether by Emma, Maddalena, or even the public spectacle of Sylvia—has been abandoned for a kind an empty series of charades, in which the game players are not even aware they are engaging. If, as a character says early in the work, Rubini and his friends are in "a state of enchantment," it has been a song created by the sirens, not human women, and can only lead to everyone being cast into the sea, which is where the film ends.
Thrown out of the beach house, Rubini and his fellow "sailors" wander the beach. Nearby we see Paola, a young, fresh waitress Rubini has encountered days before. She calls out to him, while he mimes "I can't hear you," and rather than turning in her direction, rejoins the others observing a large stingray, looking like the leviathan of old, its eyes still staring outward even in its death.
For these damned beings, we realize, there can be no salvation. Or, perhaps Fellini is suggesting—since Emma finds no joy and Steiner shockingly kills himself and his two beloved children—there is no salvation in this modern world. Steiner, in fact, warms Rubini early in the film to not seek a safe and protective life:
Don't be like me. Salvation doesn't lie within four walls. I'm too serious to be a dilettante and too much a dabbler to be a professional. Even the most miserable life is better than a sheltered existence in an organized society where everything is calculated and perfected.
The Christ of this film, after all, is only a symbol, a thing cast of stone. And the only real miracle of this film is that a small whirling engine can make it fly to its new home.