Stephan Elliot | The Adventures of Priscilla, Queen of the Desert 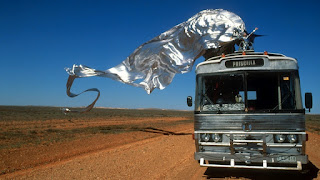 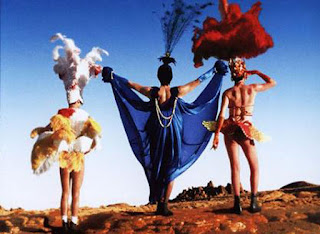 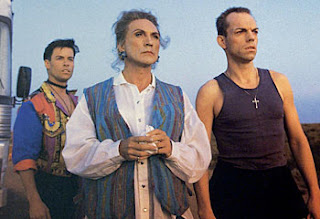 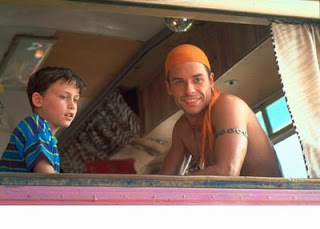 Stephan Elliot (writer and director) The Adventures of Priscilla, Queen of the Desert / 1994
If the Australian film industry is to be believed, the 1977 tour of ABBA, in front of more than 160,000 fans, totally changed the country's personality. Certainly that is one of the unusual premises behind Stephan Elliot's Dadist-like road trip adventure, The Adventures of Priscilla, Queen of the Desert.
Priscilla, incidentally, is not a human being, but a broken-down bus which speeds two Melbourne drag queens (Mitzi Del Bra/Anthony "Tick" Belrose, played by Hugo Weaving and Felicia Jollygoodfellow/Adam Whitely played by Guy Pearce) and one transgendered individual (Bernadette Bassenger/Ralph Waite, portrayed by the still elegant and stately Terence Stamp) into the desert. The mimed singing performances of Mitzi and Felicia are so stale that they've been booed off stage. Bernadette's young boyfriend, Trumpet, has been asphyxiated while dying his hair and has instead died himself. There seems no better time to get out of town and see the wondrous Australian outback that these three have seemingly never before encountered.
And what fun! We get to go along, watching them strut about in small desert towns in outrageous drag costumes with volumes of ostrich plumes, sequins, spangles, beads, bangles, and bows. Although these three may seem like ultimate victims, vulnerable outsiders in a world of pioneer-like homesteaders and native aborigines, they soon show their pluck: first by revealing unexpected aspects of themselves to each other, then by demonstrating even further surprises to the narrow-minded townspeople and dangerously bigoted miners.
The least able, and youngest of them, Felicia (whom the handsome Pearce plays with a crazed abandonment), simply needs to expand his/her experiences, and gradually does that as they move forward into space. Fixated on empty-headed gay concerns, he is literally left out in the cold by the other two until he can comprehend his ridiculousness. As the eldest of the group, Bernadette responds early in the trip:
I'll join this conversation on the proviso that we stop bitching about
people, talking about wigs, dresses, bust sizes, penises, drugs, night
clubs and bloody Abba!
Tick's response says it all: "Doesn't give us much to talk about then, does it?" Felicia is even more obsessed: one of his/her greatest possessions is a small vial wherein floats a piece of fesces—belonging to Abba singer Agnetha Faltskog! Felicia may be funny and even, at times, fun to be around, but she/he is also still a child who endangers all their lives by dressing up in drag and parading before a group of small-town miners, men who suffer most of their lives deep underground. Bernadette comes to the rescue by kicking the most threatening of them in the groin and forcefully finger-wrestling him to the ground.      .
Earlier, at another small and not so accommodating community she out-drinks the most renowned drinker, the hostile owner of the establishment. When their bus breaks down, Bernadette bravely ventures off into the desert, ultimately bringing help. The man who finally comes to their rescue is Bob (Bill Hunter), whose mail-order wife has the most unusual talent—far more pleasing to the males of this outpost—of being able to expel ping pong balls from her vagina. Fortunately, the three cross-dressing performers find a far more receptive audience in the native aborigines, who readily join in on their dancing revelries.
When Bob's wife leaves him ("I no like you anyway. You got little ding-a-ling"), he joins up with the dancers. Having seen "Les Girls," a group with which Bernadette performed years earlier, he is, it becomes apparent, smitten with her, and the two celebrate with a night in the open air. The interchanges between to two are some of the best of the movie. Describing Bob as a "gentleman," Bernadette remarks: "[to Bob] Believe me, Bob, these days gentlemen are an endangered species. Unlike bloody drag queens who just keep breeding like rabbits."
Tic has the most revelations of the three, revealing not only where they headed—the resort town Alice Springs, where they are scheduled to perform, but sharing his secret that he has been married—has, as Felicia quips, "been playing for both teams"—with the consequences of a young son. As the manager of the hotel in which they will perform, his wife has requested that he take the son for a while so that she might find a few weeks of deserved vacation.
Suddenly, with that revelation we begin to see this silly set of figures as real human beings. The duality of their lives, represented by their real and fictitious names, becomes even more apparent as these cartoons pop out into real space, joining us. It is not a profound reality, and the  believability of Elliott's transformative tale is, to say the least, shaky. But it is, nonetheless, meaningful, and changes the tone of the entire film.
Received by both wife and child with open arms and utter joy for their absurd performances, their dance becomes almost a war-whoop of retribution as they go through their paces—particularly Bernadette, whom Stamp plays as a tough, war-weary figure who's been through it all before. They are truly "Dancing Queens."
Bernadette and Bob determine to stay on at the hotel, managing it while Tic's wife is traveling. Felicia—a now somewhat calmer and less flamboyant figure—falls in with Tic's son. He is after all a somewhat elderly child who can readily play the role of older brother.
In the final scenes the three are back in Melbourne, performing at the local bar, the son happily helping out with the lights. What began as an kind of extremist parody of gay life has now been assimilated into utter normalcy.
Los Angeles, February 4, 2012
Posted by greenintegerblog at 7:48 AM