Abigail Child | On the Downlow 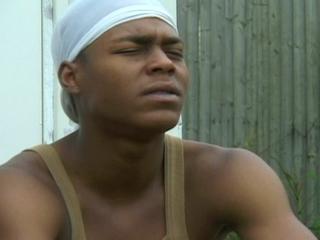 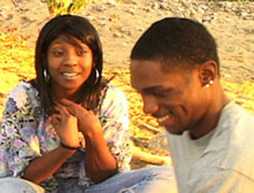 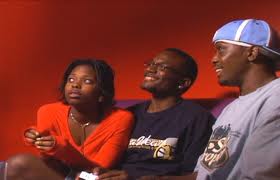 depictions of self
by Douglas Messerli


Featuring four young men and their male and women friends, Abigail Child documents in On the Downlow a world that is seldom seen by white Americans, a world of mostly Black gay, lesbian, and transgendered men and women, who instead of describing themselves as "gay"—a term which they see as  robbing them of masculinity—characterize themselves as living life on the "downlow." These men share commonalities in their feeling of an outsider status within their race, but, for the most part, it is their differences that Child so brilliantly reveals.


Ray, a Cleveland man who characterizes himself as a thug, surprises us in his very first conversation by revealing that he is attracted to the most feminine of men, often dressed as drag queens. For him they are women and he treats them as women, and in his odd view, as women he does not need to reveal whether or not he has HIV or uses a condom. While attracted to "pretty boys," he prefers the most feminine ones perhaps because he further establishes his sense of masculinity, of being a "top" instead of a "bottom."


Antonio reveals a past prison life where he slept with hundreds of men, even guards, playing the role almost of a woman, presenting a shocking view of US prison life, some of which we might have imagined but never understood as being so thoroughly prevelant. By film's end, Antonio is again arrested, his current lover faithfully waiting for his return.


One of the most fascinating of these young men is Kerwin, who perceives himself as a bisexual, but shares little with his fellow workers, and to protect himself or, one should say, to allow himself a kind a cover also has women friends whom he sometimes brings to the gay clubs he frequents. Yet Kerwin does admit his sexuality to a close woman friend and to his formerly military father in the course of the film, challenging the notion that this is primarily a secret world. These men are simply careful, for we perceive coming out to their own community as sometimes a dreadfully painful event, resulting in rejection and brutality.


Billy, who has had two children with a woman, lives with an older man in a kind of mentor relationship, recognizing the "downlow" community as more like family than the frictions of family life itself. Yet he would he give up everything, he admits, if he could only get custody of his children and raise them in a "normal" environment.


In fact, all of these men see the "downlow" lifestyle as a communal one, as mix of various kinds of sexualities, Kerwin going so far as to describe the "downlow" life of Cleveland as being a kid of blur of different beings—as opposed to the more regimented lifestyles of both Black and white families.


Whatever we might think of or have thought of the "downlow," it is brilliantly challenged by Child's documentary, as we gradually come to know these figures who bravely reveal to us on camera the open secrets of their lives. One of the most painful moments of the film is Kerwin's nervous admission to his father over the phone, expressing his bisexuality. He is terrified by his father's potential response, but the father surprises him and the audience by being generously loving and caring for his son, once again working against expectations.


Tagging along with these men to some of the "downlow" bars and clubs we witness a world which is simultaneously life-affirming and, occasionally, frightening. Flare-ups sometimes occur when someone is defined in way that does not align with their perceptions of self. Yet it is these very perceptions of their own beings, the way they manage in a world unreceptive to their sexuality, that shows us just how truly sophisticated these folks are. As Billy puts it:“Contrary to popular belief, being gay is not something you can turn on and turn off when you feel like, as far as the motions go and what you actually like. Now the way that you present yourself is something different, you may present yourself as a thug or present yourself as somebody who’s on the DL or present yourself as a drag queen, or somebody who is way out there, the way you present it, you can turn on and turn off changes, or modes or what you want it to be, but the actual feeling, NO.”

Through a gritty and yet beautiful vision of city, we come to know and feel for these Cleveland men and women, who have discovered a way to stay in touch with their worlds while still living lives apart.