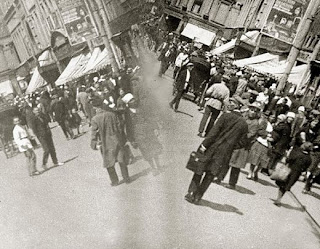 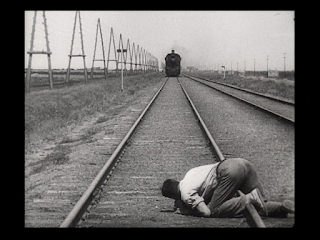 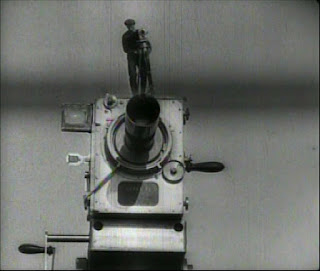 
The film Man with a Movie Camera represents


AN EXPERIMENTATION IN THE CINEMATIC
COMMUNICATION
of visual phenomena
WITHOUT THE USE OF INTERTITLES
WITHOUT THE HELP OF A SCENARIO
WITHOUT THE HELP OF THEATRE
(a film without actors, without sets, etc.)
This new experimentation work by Kino-Eye is directed towards the
creation - ABSOLUTE KINOGRAPHY - on the basis of its
complete separation from the language of theatre and literature.


Vertov had randomly shot over 1,775 shots, employing his wife Elizaveta Svilova to cut and piece them together as a representation of a day in the life of a city (in this case, Odessa) in 1929.


Certainly Man with a Movie Camera is intentionally experimental, using numerous techniques from double exposures, slow motion, freeze frames, split screens, close-ups, and long tracking shots to what is described as Dutch angles, a tilt of the camera to the side creating vertical lines at an angle to the frame.


Yet one certainly cannot describe this documentary as being without narrative. It begins, in fact, with the above manifesto as a kind prologue before showing, from within, a movie house, as the crowd enters, the seats seeming to automatically fall from upright position to the horizontal in long rows. The crowd is seated, a curtain rises, and an orchestra is poised to begin as a short stasis creates tension before the conductor brings down his baton on the Alloy Orchestra, a group which creates not only a driving rhythmic music but incorporates sounds such as sirens, crowd noise, the cries of babies and much else.


The narrative is made immediately apparent, as a woman is seen sleeping upon a bed, an alarm clock blares, and another woman sits up to wash her face and change into her dress. Although Vertov's work begins rather slowly, it quickly picks up a speed that drives the numerous daily routines, from traveling to work by bus, train, streetcar and other modes of transportation to the masses' arrival into the heart of the city where they begin their numerous daily routines that take us into the late afternoon when the host of figures engage in multiple entertainments, including theater, sunbathing, and various engagements in sport events.


At the center of this narrative is the central character, an almost manic cameraman (Mikhail Kaufman) who with camera in hand hops upon various forms of transportation, climbs bridges, and mounts machines, tracking scenes from below and on high as he risks his life to capture energy of city living.


But, of course, we know that despite the cameraman's busy demeanor that there is yet another camera trained on him, and that, in fact, the film is not just a movie about a "man with a movie camera," but is a more self-referential film, a movie about a movie maker. The stars of this narrative are the cinematographer, Vertov himself, and the tool he uses to accomplish the task. At one point the camera seems to actually come alive, taking itself apart and reassembling its own being. At another moment we witness the mad camera man atop his own camera. And again and again, while the masses go about their daily chores, the cameraman and his camera race across the screen to track the actions of the Soviet folk it—again mostly in a pretense—"secretly" shoots. This is not exactly candid camera, however, for although Vertov is said to have distracted several of crowds from the fact that they were being filmed, the very outsized version of his machine surely encouraged some of his figures to pose for the camera, or, to put it another way, to "act."


Except for the statement of no intertitles, accordingly, Vertov's manifesto seems to ignore what it claims to have accomplished, creating instead a kind of theatrical narrative whose actors are the cameraman and his camera among a cast of thousands of extras. No matter, the film is still today one of the most remarkable documentaries ever made, long ahead of its time using techniques that influenced 20th and 21st-century filmmaking.


If at times Man with a Movie Camera, particularly near the end, seems—as Vertov's critics had argued—gimmicky and even manipulative, overall the work is a remarkable achievement, representing as it does a vast landscape of pulsing city life.


If Vertov’s Man with a Movie Camera is an exciting mélange of cinematic experimentations, his and his wife’s Three Heroines is a rather straight-forward, at time amateurish, propagandistic tribute, less to the three heroines of its title, than to Stalin and the Soviet system.


It is true that Vertov and Svilova, true to their beliefs, did not use voice-overs or devise numerous acted out scenes for their documentary. Indeed Vertov’s more radical methods were now devalued by the Soviet film heads. Accordingly, this film was little seen in the Soviet Union and completely unknown to the rest of the world.


The three heroines are air pilots Raskova, Osipenko, and Grisodubova, who attempted to make a first nonstop trans-Siberian flight. They failed, crashing into the Soviet taiga, and for several days their whereabouts were unknown.


Higher-ups, however, insisted upon detailed searches and, eventually the three were discovered alive and still in good health. The irony is that this threesome came to be better known having failed than they might have had they succeeded in their mission. After mending, the women called home to their husbands and children—their joyful communications caught by the documentarians camera in some of the moving scenes of the film—before they were taken by train on the long journey back to Moscow. Along the way, the three made numerous stops, the woman laden with medals and flowers, presenting speeches proclaiming the greatness of the Soviet system and the beloved protection of Stalin. Unlike the West’s neglect of Amelia Earhart, they argue, the Soviet system cares about its would-be heroes and all its citizens, of which their salvation is an example.


By about the third or fourth such speech even the most ardent viewer grows weary, and the constant repetition of a song of these tiaga-trotting women, alternating with praises of the USSR—the major link between their picaresque travels—rather than charming the viewer, drills the ditty into his head.


Certainly, there are lovely moments, and the imposing views of small Soviet villages are often fascinating as Vertov’s and Svilova’s camera remains in near-constant motion. But this time, without many cinematic tricks, the document seems uneventful and flat. Long live the Soviet people and their great protector Stalin and Soviet Commisars!

Posted by greenintegerblog at 7:49 AM