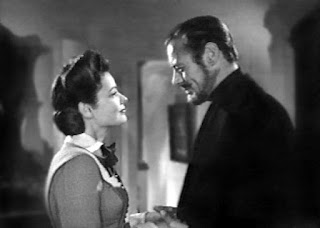 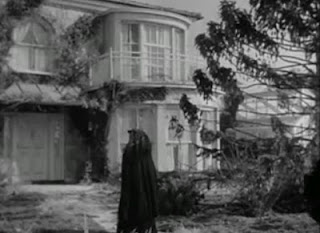 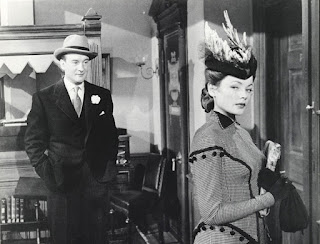 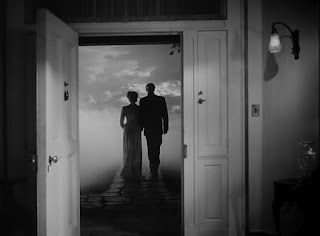 Philip Dunne (screenplay, based on a novel by R. A. Dick), Joseph L. Mankiewicz (director) The Ghost and Mrs. Muir / 1947


Basically a well-made romantic melodrama, The Ghost and Mrs. Muir would hardly be worth talking about without its three remarkable leads, Gene Tierney, Rex Harrison, and George Sanders, and even then there’s not a great deal to write home about. Yet this comic tear-inducing film is strangely interesting just because of its nearly impossible structure.


Briefly I’ll recount Phillip Dunne’s simple screenplay based on the novel by R. A Dick. Raising up her daughter in her mother-in-law’s house after the death of her husband, Lucy Muir (Gene Tierney) decides to go it on her own: over the objections of both Angelica (the mother-and-law) and Eva, her sister-in-law Lucy takes her small inheritance, their family maid Martha Huggins (Edna Best), and daughter (Natalie Wood) and moves to a seaside residence, Gull Cottage, to live in semi-isolation. The rental agency tries to dissuade her from moving into Gull, since—as we soon find out—it seems to be haunted by its former owner, Captain Daniel Gregg (Rex Harrison), a former sea captain who is said to have committed suicide.


Despite the ghost’s lame attempts to scare the new tenant off, Lucy stands firm, determined to stay put. When the small payments she has been receiving stop, the mine in which her husband had invested having gone bust, the Captain dictates the unvarnished adventures of his life to her, she typing them up, putting them in order, and selling them as Blood and Swash to a London publisher fond of sea tales.


During the writing sessions, inevitably, Lucy and the ghost have fallen in love, both realizing that it is an impossible situation; even the Captain admits that she should find a “real” man, and disappears from her life.

Captain Daniel Gregg: You must make your own life amongst the
living and, whether you meet fair winds or foul, find your own way
to harbor in the end.


Lucy’s new love interest turns out to be children’s writer, Miles Fairley (George Saunders) who writes under the name of Uncle Neddy. He visits her by the seaside, and she travels to London to visit him, there encountering his unexpected wife and hurrying off the moment she makes the painful discovery, the wife admitting that it has not been the first time.


So ends this pleasant fantasy. The only problem is that the film still has more than a third of a reel left! What to do with the rest of the time?


Director Joseph Mankiewicz and writer Philip Dunne obviously had no clue, using that space for a long series of “time passes” sequences, as Lucy walks the beach through sun and storm, night and day, a signpost inscribed with her daughter, Anna’s name (facing in to the shore, instead of out to sea) gradually sinking into the sand. Were it not for Bernard Herrmann’s lush orchestral imitation of rolling waves, it would be nearly unbearable. As it is, the film has grown tedious enough, as the years pass and pass, that we are absolutely delighted with the sudden visitation of the now grown up Anna, her new beau in hand.


In a mother-daughter conversation, Anna admits that she too, as a young girl, had fallen in love with Captain Gregg, of whom Lucy is now convinced has been only a thing of their imagination. Even so, she declares, she has her memories, something the audience, by this time, has nearly forgotten.

Left alone once more, Lucy continues to age, dying in her favorite chair, freed, now that she is also a ghost, to join Captain Gregg for, one presumes, eternity, which the audience might feel it has already experienced.


If only the Captain had hung around a little longer—as he did in the later television series—it all might have been more fun.

Posted by greenintegerblog at 7:15 AM