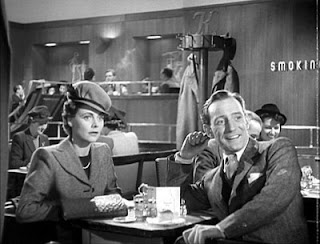 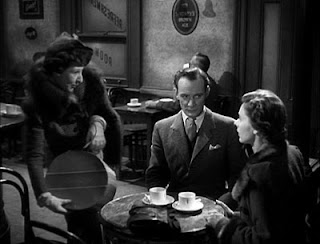 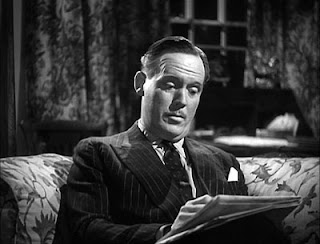 an overwhelming desire
by Douglas Messerli


Flip through almost any standard video guide and you will read of the high praises for David Lean's romantic melodrama, Brief Encounter—so much so that, at times, one might almost think of the film as a British classic. Halliwell's Film Guide (a volume intolerant to most movies) declares of the film, for example, "An outstanding example of good middle-class cinema turned by sheer professional craft into a masterpiece." On the other hand, as my favorite quick guide, Time Out, argues: "Much beloved, but still exemplary in demonstrating what is wrong with so much of British cinema,"


The work has a story, even though it is hard to say the film has real "events." A suburban woman of Milford, England, Laura (Celia Johnson) once a week travels to the city where, after shopping, she takes in a movie theater, returning by the evening train to her conventional marriage and two children. Much of the story centers around the small tearoom, and it's mostly comical residents, near the train's waiting platform, wherein travelers sip tea and munch on pastries.


On one such visit, Laura stands on the platform when another train, not stopping there, passes, throwing a small cinder into her eye. Inside the tearoom she asks for a glass a water to wash her eye free of the painful bit of grit, whereupon a man, Alec Harvey (Trevor Howard), stands up to help, noting that he is a doctor.


This simple event is almost forgotten until the following week the two run into each other again, this time at a busy restaurant where almost every table is taken. Accordingly, the two share a table and, later, an afternoon at the movie house. Charmed by the idealistic doctor, Laura intrigues the married Alec with her strong sense of self and her easy laugh (as he later puts it: "I love you. I love your wide eyes, the way you smile, your shyness, and the way you laugh at my jokes"). Feeling a bit guilty, the couple furtively make plans to repeat their outing the next week, but this time the doctor, who fills in once a week at the local hospital for a friend, does not show up until Laura is at the tearoom at the train station, where he hurriedly explains his absence as his train, traveling in the opposite direction as hers, arrives. The two again plan an outing the next week.


Their next venture together, a comical boating trip downstream, quickly develops into a furtive relationship, in which they both admit their love for one another. When they take a drive into the country on this penultimate meeting, however, he purposely misses his train, intending to stay at his doctor-friend's flat, into which he invites her. She refuses, returning to the station and her voyage back to Milford, but at the very last moment, rushes from her train, running through the rain to the flat in which she has left Alec. At almost the same instant she arrives, however, the friend returns early, so that she is forced to rush out the back entrance, ashamed for what has almost occurred.


Realizing the impossibility of their relationship, and the dark consequences arising in both their relationships with their spouses, he announces upon their final meeting that he will be traveling with his family to Africa, and will never see her again. Painfully, they sit together in the tearoom—which, in fact, has been the very first scene of the film—awaiting perhaps a tender goodbye, until one of Laura's chattering, suburban friends enters, and the two are unable to say anything. When Alec's train arrives he has no option but to tenderly squeeze her shoulder before disappearing forever, Laura rushing out of the tearoom as another train passes, possibly intending suicide to squelch what she describes:


I had no thoughts at all, only an overwhelming desire not to
feel anything ever again.


She returns, however, to the tearoom, riding home with her incessantly chatting friend to suffer out the night, as she mentally repeats the events to her seemingly unaware husband, as he studies a crossword puzzle. As they are about to go up to bed, he approaches her:

So this tale of guilt for an imaginative, if not actual, sexual digression ends.


Perhaps in the immediate postwar context of English and American life, wherein returning soldiers might have at least wondered about the faithfulness of their wives during their absence, this all meant something. Lean seems focus to play on the chastity of Laura despite her duplicity and her would-be faithlessness. The lure of  illicit sex seems perfectly balanced with the draws of home and hearth.


Yet the dramatization of these events, accompanied by the lush romanticism of Sergei Rachmanioff's Paino Concerto No. 2, seems almost goofy, as if some high drama where being played out through perfectly ordinary events. As Laura herself describes her condition, she is almost hysterical about feelings that "can't last."


This misery can't last. I must remember that and try to control myself.
Nothing lasts really. Neither happiness nor despair. Not even life lasts
very long. There'll come a time in the future when I shan't mind about
this anymore, when I can look back and say quite peacefully and cheer-
fully how sill I was.


But she does not want to forget, but to remember, for Alec is clearly the superior of the two men in her life, just as we suspect (without ever being allowed to see her) that Laura is a better choice for his love than Alec's wife. At least, Alec is allowed to have an adventure; he is on his way, after all, to Africa, while Laura must remain in the little community of Milford with no real actions behind the passion she has inwardly felt. One almost feels she has been a bit betrayed by her creators, having asked her to express such intense emotions for no sensual rewards. What is there even that she might be allowed to remember?


The film, accordingly, has riled up for both its central character and its audience feelings that are never fulfilled, transforming the cinema from being a true romance or even melodrama into merely a symbol of one. It's so hard to get excited, I am afraid, over a symbol. One has to ask, what is all the fuss about? Although Laura may have temporarily been caught up in an "overwhelming desire," this viewer, at least, is thoroughly underwhelmed.