Robert Rossen | All the King's Men 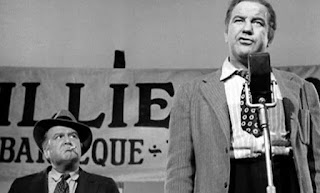 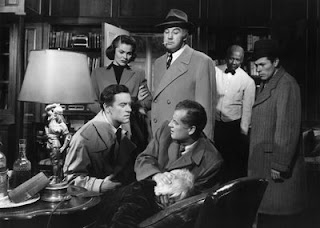 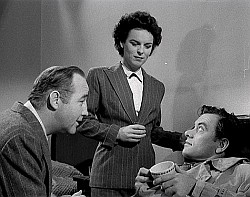 
Robert Rossen's All the King's Men, given Broderick Crawford's gruff and rough, full-steam-ahead performance, is a much less elegant and convoluted work than Robert Penn Warren's 1946 novel of the same name. But the film is more powerful for that very reason. Rossen's vast crowds of simple-minded "hicks"—as Willie Stark (Broderick Crawford) describes his constituents—has elements of German Expressionism, but the story is a pure good-to-sour American political tale, and reminds one at times, in its representation of the masses, of Frank Capra's simple-minded expressions of the populace, particularly in Meet John Doe.


What saves Rossen's work and lifts it above Capra's caprices is the acting of its supporting characters, particularly John Ireland's thoughtful playing of the journalist-gone-politico, Jack Burden, and Mercedes McCambridge's tough fast-talking Sadie Burke, the woman behind Willie Stark, his would-be lover. McCambridge won an Oscar for her role (so too did the less subtle Crawford), and she deserved it, for whenever she is in the picture, the energy-level of the film goes up by two or three notches, particularly when, unable to sleep, she joins Burden and Stark to swig down a couple of heavy drinks before telling him what a boob he has been.


Stark (a just slightly fictionalized portrait of the real hick Louisiana Governor, Huey Long) begins his trip to hell as a country rube who, as the newspaper editor Madison describes him, is "special."


Jack Burden: What's so special about him?
Madison: They say he's an honest man.


Encouraged by his long-suffering wife, Lucy (Anne Seymour), Stark tries to run for local office, but fails pitifully due to the criminal actions of those already ensconced. When the corrupt pols cheat on the construction of a local school, however, the collapse of a stairwell killing several children brings Stark, after having studied law, into the forefront, winning the love of the local masses.


His first attempt to run for State Governor also ends up in failure. But, as he puts it, it has taught him something: how to win. The solution, apparently, is to buy up the corrupt officials and employ them. As Jack Burden observes: "You throw money around like it was money." Almost from the beginning, we perceive that in order to win, Willie Stark has had to sell out. And the rest of the film behaves like a spinning dervish toward Stark's inevitable collapse.


In opposition to the political brouhaha of the Louisiana backfields and Baton Rouge backrooms, Burden has grown up in the posh isolation of Burden's Landing. As he puts it:


....Burden's Landing is a place on the Moon. It isn't real. It doesn't exist.
It's me pretending to live on what I earn. It's my mother trying to keep
herself young and drinking herself old. It's you and Adam living in his
house as though your father were still alive. It's an old man like the judge
dreaming of the past.


Yet it is just this place that breeds the four major characters, some of whom help Willie get where he does and others of whom help to destroy him.


Jack is perhaps the most contradictory of the group. Despite his early recognition of Stark's corruption, he continues to stand by him almost until the end. He is a grand failure in terms of action. While the Stanton's, Anne (Joanne Dru) and Adam (Shepperd Strudwick), and their uncle, the Judge (Raymond Greenleaf) live through ideals, Jack is a born skeptic, refusing to judge or reveal any moral position, even when he might have helped save Stark from himself. The difference between the brother and sister is merely a difference of judgment: Anne is taken in by Stark simply because he is different, and her view of him is clouded as she perceives him as a kind of white knight. Indeed Stark does accomplish a great deal, building a new state hospital, improving roads, building dams, etc. But Adam perceives the other side of the picture, and, at first, refuses to take the position of top surgeon at the new hospital, despite Stark's offer. His uncle also resists Stark's offer for him to become State Attorney General, but finally caves in, swept up in all the hoopla and, perhaps, by his own pride of his past.


In short, the whirlwind that is Willie Stark sweeps up all the characters into his wake, altering their lives through his own self-destruction. Anne falls in love with the monster, rejecting the ineffectual love of Jack Burden. But, in a sense, she is wise to do so, for Burden is utterly passive, a storyteller, not an actor in any tale. At least Stark is alive!


So too is Stark's wife left alone after the tornado of her husband's life, and their adopted son, Tom, is destroyed through his own rebellion against his father, paralyzed through a drunken driving accident that kills his female passenger. When one of Stark's appointments, Pillsbury, is caught up in graft, the Judge, told he cannot prosecute, resigns, and it appears that Stark's fall is near.


Yet Stark pulls through by pleading with the electorate who have brought him to office. Like a conjurer, he creates a circus atmosphere that washes even over the legislature. But winning is itself a kind of "burden," as Stark is forced to find corruption even in the life of the noble Judge. When Stark reveals his knowledge (uncovered by Burden) of a long ago event of corruption in his life, the judge kills himself.


Just as Stark is convinced he has won again, a man—Adam Stanton—moves toward him with a gun and shoots him dead. Stark's fawning assistant, Sugar Boy, kills Stanton. If there is something almost too pat about the ending of this cautionary tale, so too was it in real life. Some behaviors, Rossen and Warren suggest, simply create inevitable results.