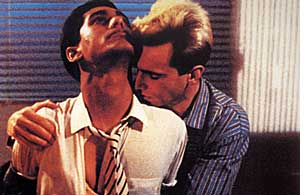 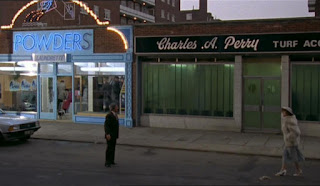 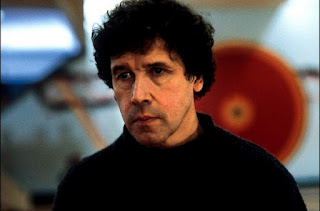 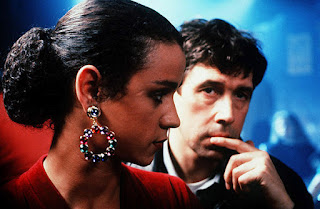 what is a gay  movie? II
by Douglas Messerli


Although Stephen Frears' My Beautiful Laundrette is generally described as a comedy, and it often behaves as one, even ending somewhat positively, I cannot help feeling, every time I watch this film, a bit dispirited, even depressed. I might almost describe the work as bleak. Perhaps it is just realistic.


On the surface, I know I ought to feel happy for the gay couple at the center of this work. Both are beautiful men, Omar Ali (Gordon Warnecke) a handsome Pakistani man, Johnny (Daniel Day-Lewis) a good-looking British punk, who begins the film as a street tough, beating up on the Pakis who have found success in Thatcher's United Kingdom, while their own families and themselves do without.


Omar, living with his alcoholic father seems to have an impossibly temperate personality as he cleans and up and cooks for his bitter Papa, a former journalist who hates the London in which he lives and intends to raise a son who will be well-educated. He clearly would prefer to be back in Pakistan, but has lost any wealth he once had. The film gets underway when he sends Omar to work for his brother Nasser (Saeed Jaffrey), who, as he later describes it, has learned to "squeeze the tits of the system." He puts Omar to work in his garage washing cars.


Nassar has only a daughter, but his symbolic son, Salim (Derrick Branche), a young man he has taken on, earns his way by trafficing drugs. Just as he had joyfully served his father, Omar now pleasantly washes cars:


Papa: Tell me one thing because there's something I
don't understand, though it must be my fault
How is it that scrubbing cars can make a son
of mine look so ecstatic?
Omar: It gets me out of the house.


In fact, Omar is incredibly ambitious, but in his quiet way he moves forward more quickly than if he had shown his intentions. For, within a few days, he has been introduced to Nasser's daughter Tania (Rita Wolf) with the intention of marrying the two and has been promoted by Nasser to take over a rotting laundrette.


By coincidence, Salim, his wife Cherry, and Omar are accosted by a gang of British thugs, led by Johnny, an old school chum of Omar's. Completely unfazed by the incident, Omar leaves the car, approaching Johnny:


Johnny: Like me friends?
Omar: Ring us then.
Johnny: I will. [indicates the car where Cherry is getting very
angry] Leave 'em there. We can do something. Now. Just us.


What quickly becomes apparent is that the two have had a sexual relationship, and now are quite ready to resume it, despite the vast differences in their stars, and before you can say Lahore the two are fucking in the back of Omar's laundrette, for which Omar hires Johnny to help him remodel. For these two, love and money seem to be the tie that binds; as soon as Johnny has been hired, he leaves his gang of toughs and the two men, stealing drugs from one of Salim's deliveries, transform their little rundown laundry into the beautiful laundrette of the film's title.

Of course, there are complex interludes, revealing a few of the differences between them: Omar is still expected to marry Tania and even proposes to her, the gang eventually comes down upon both Omar and Johnny, and as their shop is about to open, Nassar almost catches them at sex. And then there's Salim to report to for that little drug heist, which forces them into a robbery where we briefly see them accosting a young girl who has heard their entry into the house. But love and money seem to lubricate the wheels just enough that you know these two will succeed in life. Omar may never get to college, Nassar loses his British mistress, and Tania, running away from home, simply disappears between two speeding trains. Has she jumped onto the tracks?


But with the final splash of suds as Omar and Johnny minister one another, wiping away the bruises of their encounter with the gang, we know they're going to get on just fine in this British capitalist world, while Omar's father will pine away in bed for the son he has lost.


One can well understand why these two boys feel such love for one another, unlike Ang Lee's cowboys of Brokeback Mountain: both are blessed with movie-star looks. But it is almost impossible that they might truly patch up the vast differences of their pasts. Even though they are both outsiders, inside they must necessarily be still bruised by societal differences that are little explored in Hanif Kureishi's glib fairy tale. We might take notice of two changes in these men: the former teetotaler Omar is drinking heavily by film's end. And Johnny has become quite fashion conscious. Margaret Thatcher has clearly won!


This is a warning: I not only will reveal the secret of The Crying Game, which—evidently millions of viewers have not—but I will insist this is not a gay movie. Although its hero, Fergus (Stephen Rea)  holds the penis of his Black soldier prisoner, later visits gay bars several times, and has sex with a trans-gendered man two times, he is a heterosexual, who has no knowledge of the events, and, although once discovering her sexuality—even after vomiting—viciously protects her by admitting to killing her attacker, Jude (Miranda Richardson). Fergus' only failure is that he cannot kill anyone, even though he is a former IRA terrorist.


Although, with Jude and Maguire (Adrian Dunbar) Fergus has kidnapped a Black British soldier, he clearly does not have the stomach for the events which follow, including keeping the prisoner with a sack over his head and, ultimately, murdering him in retribution for British occupation in Northern Ireland. In his attempt to remain alive, the soldier, Jody (Forest Whitaker) analyzes his captors, recognizing Fergus as "the kind one," and using Fergus' reticence as a tool to control him. The cold-hearted Jude and Maguire are adamant that the prisoner be kept quite literarily "in the dark," but Fergus removes the sack and even holds the cuffed man's penis to that he might urinate. The two quickly and quietly bond, Jody even revealing a picture of his special love back in London, Dil, and asking, if he is killed, for Fergus to take care of her.


This long, somewhat rambling first part of the film is a rough but necessary introduction to the characters, who will play out their psychological beings later in the work. Indeed, Fergus is told a story by the perceptive Jody early on about a frog who agrees to carry a scorpion upon its back across a river, during which the scorpion bites him, dooming, quite obviously, both animals. When asked by the frog why the scorpion has bitten him, the scorpion replies: "It's in my nature."


Accordingly, when ordered to kill Jody, Fergus balks, allowing Jody to run from him through the woods, but, as he crosses the road to safety, one of his own unit's tanks accidently runs him down, and he is killed. The IRA quarters are blown up, with Jude and Maguire miraculously escaping.


Each time he visits the nearby club, he and the audience observe slight changes. The bar seems less glittery, the clientele stranger. A regular, Dil sings "The Crying Game," which is itself a oddly sad song about the impossibility and transitoriness of love:


Before long, the perceptive viewer begins to suspect what is revealed in the couple's second sexual encounter: Dil is a transgendered male. Fergus is disgusted and accidently hits her in his rush to the bathroom. A few days go by.


Yet the relationship between the two is still viable, and, although he no longer is sexually attracted, he does send her a note, she remaining loyal to him despite his actions. She even visits his at his work site, where he is helping to build an apartment building.

Fergus: What are you doing here?

Dil: Got your note. So let's kiss and make up, honey.
Fergus: Don't call me that.
Dil: Sorry, darling.
Fergus: Stop it, Dil.
Dil: Apologies, my sweet.
At this point Jude and Maguire reenter the scene, insisting—since Fergus has failed in the other incident—that he join them in a planned assignation of a British political figure. Although at first he attempts to reject involvement, Jude's hint that she knows about his relationship with Dil, forces him to realize that if he does not join them, Dil is in danger.


To protect Dil, Fergus attempts to transform her into her male being, forcing her to cut her hair and dress in shirt and pants. The transition is a failure, as Dil now looks more like a young ungainly boy than the beautiful woman he previously was, and Dil gets drunk, demanding that he stay with her for the night. Fergus agrees, also admitting his involvement in Jody's death. Before he can leave the next morning Dil has tied him to the bed, unwittingly preventing him from participating in the murder which might save her life. Holding Fergus at gunpoint she demands that he tell her he loves her: even if he's lying, she admits, it's nice to hear his words.


When the furious Jude shows up, Dil turns the gun on her, shooting and killing her before attempting to turn the gun on herself. But Fergus prevents her, telling her to hide out at the club, while he wipes her fingerprints off the gun, allowing himself to be arrested for Jude's death.


Fergus, now in prison, is visited by Dil. Still amazed by his actions, she promises to wait for him, recognizing him as "the love of her life":

No greater love as the man says. I wish you'd tell me why.


Whereupon Fergus retells the story of the frog and scorpion.


At film's end, we believe that they will stay together. As he admits, his acts are simply part of his nature. And love is part of that makeup. As Col has said earlier on: "Who knows the secrets of the human heart?" No matter how the audience views transvestism or trans-gendered people, by seeing the relationship develop through Fergus' view, it cannot help but rout for the fulfillment of a normal love story. Love simply must win out. And, in this sense, it is not a "gay" love story, but a heterosexual one with an odd twist,  a "straight" story about two men who have fallen in love.


Unlike the outsiders who buy into the system in Frear's work, Jordon's insiders—both of them representing, at least on the surface, versions of normality—are able to break outside of society, offering themselves a new way of living life.