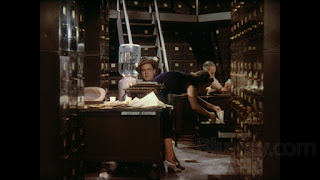 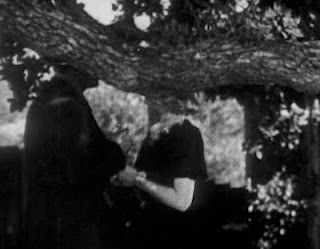 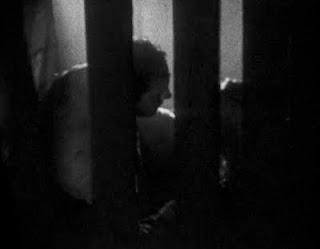 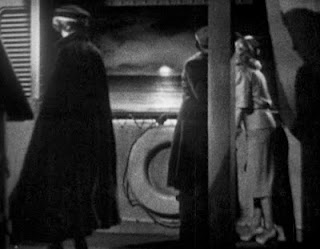 obscuring the truth
by Douglas Messerli


Willliam Wellman's 1937 screwball comedy Nothing Sacred is arguably one of the most popular of the genre. And overall, it is wonderfully entertaining. Yet I have always felt there is something a bit off-kilter about this work, and its humor is almost Capraesque in tone, by which I mean outright corny. There are moments of Hecht sophistication, but one has to endure some of the most silly of skits to get there. Perhaps the fact that Hecht left the production after Selznick refused to use Hecht's friend, the alcholic John Barrymore for the role of Wally Cook, and ten other writers are said to have contributed to the work, account for its sense of occasionally losing its way.


The film begins with a totally meaningless and somewhat racist scene wherein an ordinary Black American (Troy Brown) is deceiving a charity celebrity crowd, hosted by The Morning Star newspaper, by playing a wealthy African nobleman, the Sultan of Marzipan, identified mid-event, by his wife, Mrs. Walker (Hattie McDaniel) and two children. The deceit gets reporter Wally Cook (Fredric March) demoted to the obituary editor in an office location where everyone on staff must push, punch, walk over, and pour files upon him. Only his discovery of a story-in-making about a young Maine woman, Hazel Flagg (Carole Lombard), who is dying of radium poisoning, frees him from this silly purgatory.


Why Hazel is suffering from radium posioning in the small town of Warsaw is never explained, and Wally must endure a whole village of "Yep and Nope"-sayers before the film can truly begin. Hazel has returned to her local doctor only to discover that he has made a mistake, and she is as strong as an ox. But the news that she must now give up her trip to New York—leaving of the uncommunicative folk of Warsaw—brings tears to her eyes. Asked by Wally, "You've lived here all your life?" Hazel answers, "Twice that long."


On behalf of the Morning Star Wally invites Hazel to fly to New York on the paper's expense account, where he plans to use her as lure to sell copies of the paper. She readily agrees, but, again unexplainably, insists they bring along the reporter-hating doctor, probably so the director might use Dr. Enoch Downer (Charles Winninger) as a comic figure throughout.


In their very first conversation, moreover, Wellman does something even stranger than introducing extraneous events into the plot, but this at least helps us to begin to comprehend some of the film's ramblings. A part of the couple's conversation is blocked from view by a large tree limb, and we lose not only their faces, but what is being said. It is almost as if the director were attempting to obscure the action. And perhaps that, in turn, explains why so much of the humor of this film is irrelevant to the story itself.


The plot is almost ridiculously simple, and we have already had almost everything revealed. Hazel is not really sick, and so, even though she has entered a world of con-men (as the doctor has previously described reporters: "The hand of God, reaching down into the mire, couldn't elevate one of them to the depths of degradation!), she is, herself, a fraud. And so, too, is the doctor!


Even though Hazel and the doctor dupes Wally, so does Wally, through his newspaper, pretend great admiration to gain sales. The city hands Hazel its key, organizations alter their activities, the whole of Manhattan, so it seems, opens its heart to the dying woman. But behind it all, as Wally suggests, is hypocrisy and sentimentality. Wellman's New York is a cynical world where everyone does what is best for himself.


The couple attend a wrestling match, where Wally explains to Hazel that the wrestlers are simply performing, playing a sham. They attend a nightclub, taking in a hammy performance of the great women of history: Lady Godiva, Helen of Troy, Pocahontas, and Katinka, the Dutch girl who put her thumb in the dyke among them:


Master of Ceremonies: [introducing on stage performer on horseback]
Katinka who saved Holland by putting her finger in the dyke. Show
them the finger babe.
Katinka: [extends bandaged middle finger to audience]


By the time Hazel is invited on the stage, she, feeling more and more guilty for her deceit, is drunk.


Again the director interrupts his story with more extraneous events: the doctor dropping by to feed the hung-over patient raw eggs, a children's chorus performing in her doorway while a squirrel, escaping from one of the boy's pocket, terrorizes Hazel by crawling across her pillow. Like the scenes before it, they are not as funny as they are distracting. They obscure our vision, so to speak. They hide the "awful" truth.


So dispirited is Hazel, particularly since she has tricked Wally, a man she now loves, she concocts yet another fraud: she will drown herself, leaving a suicide note, and escape with the doctor waiting in a small boat.


Once more, Wellman throws out a bit of extraneous fluff before he proceeds. As Hazel sneaks away to throw herself into the river, the Black man of the first scene sneaks into her room to gather up some flowers for his wife, discovering the suicide letter in the act.


Hearing of Hazel's intentions, Wally rushes to the river just as Hazel is about to dive in, propelling her and himself into the dark waters. Hazel must come to his rescue, since he cannot swim.


The scene following is again inexplicable as the couple feel the need to hide in a crate. What they're hiding from is not explained, since Wally could simply claim that he had saved her. But the scene reminds one of the early shot where the couple were blocked out.


This time, however, we can hear them, as Wally proposes marriage and she, compliantly accepts. A firefighter observes them and speaking in a kind of Swedish or Norwegian accent, laden with words beginning with J and spoken with Y's, brings them out of hiding, allowing them to ride back to safety in the fire truck.


The entire story has now almost been played out. All we need is to see the couple married off.


But before that occurs, she is visited by three comic doctors of international renown, who ascertain that she is not suffering from radium poisoning, reporting the fact to the newspaper editor.


Wally, called into the editor's office, is kept under house arrest, while another tough watches over Hazel. The editor, Oliver Stone, is about to take revenge:


Oliver Stone: I am sitting here, Mr. Cook, toying with the idea of
cutting out your heart, and stuffing it, like an olive!


A call from Hazel's room, however, saves the day. She has pneumonia, and is running a high fever. Stone prays for her death.


Wally rushes to her room, soon perceiving that she has again deceived everyone by heating up her thermometer. To bring up her blood pressure and a sweat in order to convince others of her illness, Wally mocks a fight, finally slugging her out.


Wally Cook: Listen, my dying swan, this is no time for faking! You're
going to have pneumonia and you're gonna have it good!


But Stone has been behind him to observe the entire scene:


What to do with Hazel? Her desire to just go away is rewarded, as the couple are seen kissing—again with objects obscuring their faces—aboard a ship on their way to their honeymoon.


Through both story and images Wellman does his best to obscure their happy fate, showing us only the ugly lies of their lives head on. It is almost as if the director and his writers behind this cynical satire, were trying to block out everything that brings these two beings together: mutual attraction. In the end we have to ask ourselves, which is the truth, the fraud and deceit or  love that binds them?


Awakening from his alcoholic stupor, the doctor peers through the porthole, confusing the facts one more time:

Posted by greenintegerblog at 7:32 AM