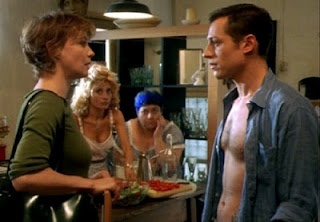 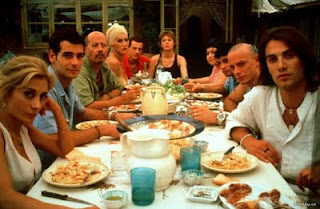 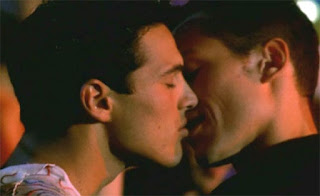 truth that cannot be told
by Douglas Messerli

Written and filmed in Italy, Turkish-born directors Ferzan Ozpetek's Le fate ignoranti begins with a beautiful woman, Antonia (Margherita Buy), strolling through a ancient art exhibit, where she is, so it appears, accosted by a handsome man, Massimo (Andrea Renzi), who attempts to pick her up, Antonia telling him to go away. She is waiting for her husband, she proclaims, who is quite late, to which Massimo reacts with shock that he should leave such a beautiful wife alone. The two go off together for what appears as a night of sex at her posh Rome apartment.
In fact, the two are husband and wife, playing a sort of romantic game, she playfully chiding him for his lateness, he apologizing in the role of a stranger, the first of a series of this film's dramatized "lies."
Antonia, we later discover with the help of her mother, is a woman "not very curious about life." Marrying her schoolmate, Massimo, she has given up her post-doctoral ambitions, working instead as a doctor in an AIDS laboratory. Her life in an upper-class villa is a pleasant one, and her marriage seems near perfect.
Massimo is killed by a passing car, however, a day or so later, and Antonia, bereft and in shock, begins to gather up his possessions from his office, painfully trying to piece memories of their life together. In the process she accidentally uncovers, on the back of one of his office paintings the following hand-written message:

What does it mean? Clearly Massimo's wife is in shock, is desperate to seek out the truth, contacting Massimo's former efficient secretary to determine the source of the art. The secretary reveals an address, to which Antonia drives, attempting to return the painting, but encounters only a neighbor who tells her where the lover works and when she will return home.
Antonia tracks down the lover in the market, presuming it is the beautiful woman standing next to a handsome young man. But when she returns to the apartment, there is no beautiful woman, but only a room of gay, transgender, and other figures, including the young man, Michele, who she has spotted at the market. Bit by bit, the truth comes storming over her uncomprehending mind: Massimo's lover was Michele, another man.
Revealing part of the story to her mother, Antonia tries to gather the strands of remaining reality together; but her mother has seemingly more sympathy for the lover than for her own daughter, revealing that she also spent most of her life loving a married man. The irony is, at first, comic, but is also revelatory of just how self-centered Antonia has been. She has never noticed anything unusual about her mother or her husband! If Michele has characterized himself as "the ignorant fairy," it is, in truth, Antonia who has lived in ignorance, in a fairy-tale world. The small community of Michele's rooftop apartment was completely aware of Antonia's presence, of her robbery of the man they all clearly felt was one of them.
Clearly if she wants to discover all the things she never knew, she must return to Michele's house, joining in his and his friends' witty lunch and dinner time conversations, and gradually she does so, discerning some close connections to her rival. When Michele reports how he and Massimo met, both of them desiring the same rare book by the Turkish poet Nazim Hikmet, she reveals that the book was a gift to her, that Massimo had never read Hikmet, quoting an entire poem she has learned by heart.  Michele's open and joyful manner, moreover, attracts her. He has even given out a room to a friend, Ernesto, dying of AIDS, to whom Antonia begins to minister. In short, while Massimo's and her relationship has been a cloistered one, Massimo's and Michele's love has been shared with a supportive community of outsiders. And in that sense, the film becomes, symbolically speaking, a discussion of insider and outsider love, of truth-telling and a world in which the truth cannot be spoken. Which is which is often hard to say, but it is clear that Antonia's life has been lived with a deeper sense of separation than Michele's. If Michele has had Massimo only for a few hours each week—a time when Massimo claimed he was attending soccer matches—it has been a far more open proclamation of love that her marriage.
All the more amazing, accordingly, that Antonia gradually fits into this community, vicariously falling in love with Michele, even giving him as a gift the precious book Massimo has bought for her. As Ozpotek reveals in a scene where Michele publically and later privately has sex with two other men, it is a love that Antonia cannot truly have, just has she has not truly had all of Massimo's love. Learning to share is perhaps at the heart of this gently witty cinematic work.
Throughout the film, Antonia flits back and forth between her former and new reality as if she were in a sort of fever, never fully breaking through the net in which she has found herself. Finally, however, it dawns on her that something else is happening to her very body, as she discovers she is pregnant with Massimo's child. Excited by the news, she buys a bottle of champagne to celebrate her announcement to Michele and his friends. As she enters the apartment, however, she overhears catty comments about her, freezes, and exits, determining to leave Rome for an undetermined destination and period.
Her final actions can be read in several ways. In some senses, she has come to realize that she has no real place in this "new" society, that she will forever remain an outsider to these outsiders, the villain who Massimo from his lover and dear friends. In a sense, it is as if she herself was suddently an outcast, as if she—ina conservatie straight society (very close to the one in which she has existed) had contracted AIDS. Certainly a child can have no place in such a world. But one might also read her exit as the recognition that, finally, she has a part of Massimo that none of them could ever have, a result of the reproductive possibilities of a heterosexual life. To tell them of that would perhaps emotionally devastate them more than even losing Massimo.
Ozpetek gives us no answers. She may return with the child, gradually integrating it into her husband's other half of his life. What eventually we do know for certain is that Antonia cannot ever return to the deep incurious ignorance (can never again be "the ignorant fairy"), the condition in which she spent so much of her life.