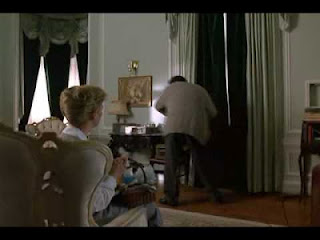 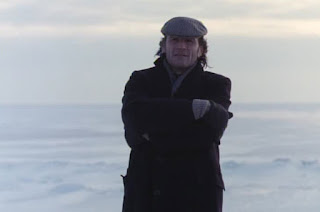 
Basing his structure upon that of Johann Sebastian Bach's Goldberg Variations, one of Glenn Gould's most renowned recordings, Canadian film director François Girard has created a polymorphous work that challenges the notion of a single coherent being, perhaps the only way one might logically present the life of this conflicted artist. As Girard makes clear through his Arias, the numerous titled "filmlets" and the final "End Credits," Gould (performed by Colm Feore) was a complex being. The virtuoso pianist, as legend has it, began playing in his mother's womb, responding to the music she listened to daily, and already at the age of 12 had graduated with the high marks from The Royal Conservatory of Music in Toronto. Although many found his interpretations of Bach and the numerous other Baroque, Pre-Baroque and contemporary artists to be merely eccentric—Gould sat in a low chair, especially built for him by his father, pulling the keys with his fingers as opposed to striking them from above, and swaying with the rhythms of the music, groaning and humming as he proceeded—the artist was beloved by many in and outside the music community, and during the years in which he professionally performed quickly gained an international reputation.


Gould, declaring the concert hall to be similar to a sports arena, ended his performing career eighteen years before his death, announcing after a concert at the Wilshire Ebell Theater in Los Angeles in 1964, that we never perform again. The film that portrays this momentous decision shows a composed and friendly Gould, asking a stage hand how many years he had worked and willingly signing a program for his wife. Throughout much of his performing career, Gould had not been so affable, and was known for cancelling concerts or simply not showing up. Just before a concert with the New York Philharmonic, Leonard Bernstein announced to his audience, "Don't be frightened, Mr. Gould is here and will appear in a moment."


That decision obviously created a flurry of reactions, which the Gould character spoofs in the short piece, "Gould Meets Gould," where he plays the role of a critical interviewer to whom he responds in like. In another short piece violinist Yehudi Menuhin, agrees that performing is often difficult, the sound of each hall varying, the temperatures radically differing, etc., but notes that, unlike Gould, who treated his playing as an "intellectual exercise," that Menuhin craves and enjoys the company of his audiences.


With the end of his performing career, Gould, far from retiring, devoted his time to recordings, using many of the new technological developments to enhance his performances. One of the most humorous of Girard's short takes on Gould portrays one such recording session, where in one room Gould listens to the tape of what he has apparently just played, while behind the glass partition the technicians speak loudly about various unrelated topics, including food.


In another jocular piece, we see Gould in a Hamburg hotel, speaking on the phone while a German cleaning woman works around him. She is about to leave, when he requests that she remain. Hanging up the phone, he puts on a record of one of his recordings, motioning her to sit. Reluctantly she does so, but as he lurches around the room one can detect her discomfort and fear for what he might want with her. But gradually, as the music proceeds, a smile comes over her face as she delights in the music. At work's end, she lifts the album cover to see who has played the work, discovering that she has been invited to listen and react to the performer himself.


As Girard makes clear, Gould was often neurotic. Throughout most of his life we wore a coat and gloves, no matter what the temperature, and demanded rooms be highly heated. He complained of a number of ailments, few of which were detected in the autopsy upon his death. As the film reveals, he took a wide range of prescription medicines, however, as he proclaims, "not all at one time." Driving across the country, he listened to top-ten music, despite averring a dislike of popular music. His major method of communication with others was the telephone, which he would use to suddenly call family and friends to speak for hours at a time or call to report, as he does in one short film, that he has had a dream about Arnold Schoenberg.


Gould also wrote numerous articles about music and other subjects, and performed on Canadian radio. A selection from his radio documentary, "The Idea of North," is represented, as he gathers voices much in the way one might tonal registers of music. Similarly, Girard shows us one of his trips to Gould's favorite diner, Fran's Restaurant, where he simultaneously listens into the conversations of several different customers as he eats his regular, scrambled eggs and catsup.


Clearly Gould himself was aware of his numerous eccentricities, both mocking them and celebrating them. In the short "Ad" he jokingly puts himself forward as one might in a "lonely hearts" advertisement:

Because of his seemingly "puritan-like" behavior and his own statements of his being "The Last Puritan," some had suspected that Gould was homosexual, but some years after this film, Cornelia Foss, wife of artist Lukas Foss, revealed that she had a four and a half year relationship with him, assuring others that "he was an extremely heterosexual man."


What these 32 takes of Gould demonstrate was that the artist was simultaneously many things, a devotee of the past who was obsessed with new techniques, a man who loved to be around "regular folk," but who also isolated himself, and communed with Canadian intellectuals of his time such as Marshall McLuhan and Northrup Frye. While he devoted most of his life to the works of Baroque musicians, he also embraced some 20th century composers and was proud to have had his music included in the Voyager space ships "destined to reach the edge of our galaxy." Gould was utterly intellectual and yet self-deprecating and, as this film shows us, was often very witty. In short, Glenn Gould existed as a series of self-reflecting and sometimes opposing personalities who might never perceived in a more traditional biopic.