John Huston | The Night of the Iguana

John Huston and Anthony Veiller (based on the play by Tennessee Williams), John Huston (director) The Night of the Iguana / 1964


The more I see of Tennessee Williams' plays and the films based upon them, the more I perceive that his strongest works are often the least taut and structured. These days I much prefer the kind of wandering and wondering mazes of unrelated phrases and perspiringly panicked figures than the orderly march of the comic matron of The Glass Menagerie. Any attempt to contain Williams' sprawling wordfests, as in Brooks' cinematic adaptations of Cat on a Hot Tin Roof and Sweet Bird of Youth, results in a kind clinical imprisonment of the characters, as, in their babbling confessions, they become locked up in themselves. Williams, as I have suggested again and again, is not a successful realist, and to tie any work of his to real life is miss the point. New York Times critic Brosley Crowther did precisely that in his review when the film premiered:

Since difficulty of communication between individuals
seems to be one of the sadder of human misfortunes that
Tennessee Williams is writing about in his play, "The Night
of the Iguana," it is ironical that the film John Huston has
made from it has difficulty in communicating, too.

At least, it has difficulty in communicating precisely what
it is that is so barren and poignant about the people it brings
to a tourist hotel run by a sensual American woman on the west
coast of Mexico. And because it does have difficulty—because
it doesn't really make you see what is so helpless and hopeless
about them—it fails to generate the sympathy and the personal
compassion that might make their suffering meaningful. 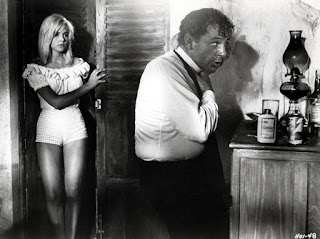 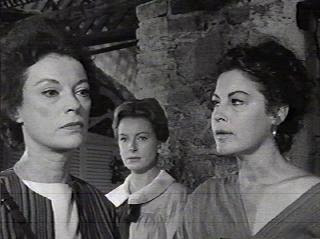 I have to agree that for a man in such an "unstable condition" as the ex-Episcopal priest Dr. T. Lawrence Shannon (Richard Burton) describes his situation(he has only recently recovered from a nervous breakdown), the once handsome Welsh orator doesn't sound like he's so shaky. The spinsterish artist Hannah Jelkes (Deborah Kerr) is so lovely to both listen to and look at that it is neigh impossible to  comprehend why her only brush with sex was with an elderly man who requested an article of her clothing. And the gutsy and raunchy hotel owner, Maxine Faulk (Ava Gardner), dancing and drinking out the day with her cabana boys, certainly doesn't seem to be on the edge. But that's just the point. As Shannon tells Hannah "The Fantastic Level and the Realistic Level are the two levels upon which we live." And clearly for much of this hot-house concoction the characters exist on the Fantastic Level, pouring out their inner fears and desires to anyone who might hear them out.


Moreover, for the long night ahead at the dilapidated Mexican hotel to which Shannon has run, the four most fantastic figures—Shannon, Maxine, Hannah, and her poet father, Nonno (Cyril Delevanti)—must face a entire bevy of real world literalists, determined to put an end to their absurd existences. The very idea that such exaggerated figures should have to rub up with a whole busload of female singing Baptist tourists, headed by an hysteric moralist such as Judith Fellowes (Grayson Hall) aboard to chaperone the sexually "precocious" Charlotte Goodall (Sue Lyon) is nearly preposterous. But what fun!


Part of the great joy in this film is the comic explosion when a truly moral man, formerly of the church, rubs up against a pack of wolves desperate—in the young girl's case—to get him into bed or—in the case of the elder tourists—to discover him in that bed and torture him to death. The great guffaw of Williams' underrated work arises from the fact that all the self-proclaimed moralists of the film see sex everywhere, while the morally "unfit" live relatively chaste lives. Shannon has, after all, not run away to this run-down Mexican retreat to meet up with Maxine as much as to be mysteriously "cured" by her former husband, Fred, a man who apparently had little to do with her sexually ("He lost interest," Maxine notes), preferring to spend most of his time "fishing," another word, one suspects, for "cruising." Shannon, in fact, seems quite fearful of and resistant to women. After attempting to "swim to China," an attempt at suicide, Shannon, bound and tied to a hammock, responds to Hannah:


I thought you were sexless. But you've just become a
woman. And do you know how I know that? Because
"you" like "me" tied up! All women, whether they wish
to admit it or not, would like to get men into a tied-up
situation.


Hannah has not even had sex. Maxine spends more time dancing with her cabana boys than snuggling up to their bodies.


On the other hand, the singing teacher harridan, Judith (tagged by the fantasists as a closeted lesbian) perceives nearly any motion as a sexual act. When her young charge swims out to join Shannon taking a dip in the ocean to get out of the blistering sun, she slaps the girl across her face:

Judith Fellowes: Dreadful girl. You defined me. You "deliberately"
defied me.
T. Lawrence Shannon: What did you think we were doing out there,
Miss Fellowes? Spawning?


As Shannon summarizes her condition: "Miss Fellowes is a highly moral person. If she ever recognized the truth about herself it would destroy her." 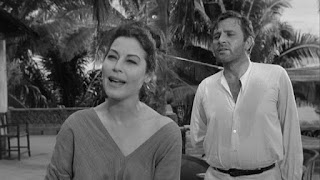 Both Shannon and Hannah share a view of the world that is quite all-encompassing. As Hannah explains: "Nothing disgusts me, Mr. Shannon, unless it's unkind, violent." Shannon decries "man's inhumanity to God," a statement I interpreted as admonishing religious believers for forgetting that God, as Christ, lived life as a frail and sometimes erring man. We are not gods but humans in need of forgiveness. And what links them, strangely, is their chastity, their commitment to their vocation, she to her art and her father's poetry, he to the church, despite his having been "locked out" for a supposed sexual tryst with a Sunday School teacher ("kneeling led to reclining"). And despite her seemingly hard-drinking and sexually-craved personae, Maxine is at work's end willing to leave her hotel to the management of the spiritually soothing Judith and the restored Shannon as she prepares to return to the states. Shannon's act of cutting the tethered iguana loose obviously represents the freedoms—including the absolution of their sins— these characters demand.


It is the legion of travelers—which in Williams' original play included a group of Nazi tourists—who are truly immoral, all being people who believe fervently in their righteousness. Like an army, they are internally on the move, destroying nearly everything that crosses their paths, leaving the lame, the panicked, and the dead—Nonno dies mercifully after completing his poem—in their wake.


At work's end, Shannon remains with Maxine, the only aspect of Huston's film I find somewhat unbelievable. Doubtlessly, he will also spend most of his time, now that he has abandoned his religious restraints, "fishing" like Maxine's Fred.