I've never seen nor read the John Arden play whose title I have borrowed for this short essay, but I cannot imagine a more appropriate phrase since Shōhei Imamura's 1961 film is not only literally about pigs and battleships, but is, metaphorically speaking, a work in which all the characters more or less live like pigs within the post-war Japanese society of the port Yokosuka. Although the Allied occupation of Japan has seemingly brought some sense of industry to the democratized city, it is still a world of slums and darkness where nearly every individual—Japanese, Americans, and other outsiders—are on the take, each preying on one another in the form of everything from sex to pig slop, from, as the title suggest, pigs to battleships—or, at least, what comes with the latter.

Like Kurosawa in Drunken Angel, Imamura takes the viewer through a world of thriving backstreets and alleys, all lit up with neon and filled with sailors, prostitutes, petty thieves, hoodlums, members of the Shore Patrol and Japanese police. At times his camera is so frenetic in its chase of figures through his set, that audience members might almost lose their breaths. But for Imamura this energized chaos is as comical as it is dangerous, each layer of the social structure using the others to sell and buy, the body being the most saleable commodity, or, as the local Yakuza describe it, to rake in "contributions." 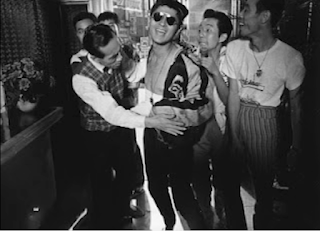 At the center of this fomenting world is the likeable but slightly dumb-witted Kinta (Hiroyuki Nagato) and his pretty girlfriend, Huruko (Jitsuko Yoshimura), who works in a nearby bar. In large this couple stands apart from the rest of the community in their simple desire to marry and find a way to eke out a living. But in this dark world, there is no easy escape. Kinta stupidly thinks he is rising in society as he moves from a position of a ringer who brings American sailors into the underground brothels to a role in the local gang as a pig farmer, a capital venture of gangster Tetsu and his friends, who use black market slops to feed the profitable beasts.

Huruko faces daily pressure from her mother to leave her job at the bar and become a high class prostitute, like her older sister, serving the American sailors under the tutelage of the slightly mysterious American, Mr. George, who is suddenly replaced by a similarly opportunistic figure. And, at least twice in the film, the young girl, penniless and fed up with the actions of her lover, is drawn into this dark sexual underworld, at one point being gang-raped by three American sailors—an event which quite literally sets her mind and Imamura's camera spinning—and, after she attempts to steal cash from one of them, is arrested.

Despite this, however, Huruko and Kinta's elderly father are the only ones presented who seem to have moral values. Throughout the film Huruko's major role is her attempt to try to convince Kinta to leave the Yakuza and travel with her to a neighboring city where they can find employment in a factory. 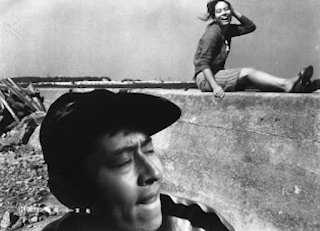 Factory wages, however, are notoriously low, and Kinta has dreams of either owning a band that might play every night on the American base or working as a high-class pimp. Despite his own involvement with gang shakedowns of nearly everyone, it never seems to dawn on him that no matter what money he might make, it would be taken from him. Because of these ridiculous aspirations and his blind belief in his gang future, the Yakuza make exaggerated demands of him, forcing him to agree, after they kill an aging gangster, that if the body is found he will claim the guilt.

Imamura's work soon swings into full motion, lurching back and forth over more and more absurd events, sometimes without a great deal of narrative coherency. But the result is as lively story-telling as are his hilarious types. The handsome head of the gang, Tetsu, like Kurosawa's Matsunaga, is a dying man, or, at least, he is convinced he is (in fact, he has only a stomach ulcer). And the others betray one another as they struggle to make payments to the American for the outdated rations to feed the pigs. When they cannot come up with the money, both sides attempt to sell the animals, which leads to a free-wheeling street chase between big-rig trucks—with Kinta mistakenly thought to have betrayed both. In one of what has to be one of the most ludicrously comic scenes in film history, Imamura places the inexperienced Kinta at the center of a machine-gun battle that shoots up the entire town, ending with a mad release of hundreds of pigs who go trotting up and down streets and into the alleys, ultimately trampling the members of the Yakuza to death. In a mockery of James Cagney-type American movies, Imamura shows Kinta being shot, eventually dying face down in a woman's latrine

At film's end, a new battleship has arrived, as the women in the town rush out to meet it and the Americans who will pay for their pleasures. Although she has been finally convinced by her mother to join the others, in the final scene Huruko moves off in the opposite direction toward the train station that will take her away from the pigs and battleships that have destroyed any possibility of true love.

Imamura's movie is, at times, patently anti-American, but he is no easier on his own countrymen, who in attempting to get their hands on the American dollar, live like pigs on their way to slaughter. In the end, the director transforms Hisashi Yamauchi's sometimes loopy story into a serious and memorable satire.

Posted by greenintegerblog at 7:45 AM