spaghetti and meatballs
by Douglas Messserli


This pleasant comedy has a predictable plot: playboy novelist Owen Waterbury (Kirk Douglas) is less interested in writing than in living the life of a noted writer—consuming women and money as an alcoholic does wine. As the story begins, in fact, he has just broken up with his former "secretary," and is in search of a shapely replacement. Speaking before an adult creative writing class, Waterbury meets Stephanie 'Steve' Gaylord (Laraine Day), suggesting that she apply for the job; once he perceives her assets, she is quickly hired. She determines to leave her current job working for bookstore owner Rudy Vallee in search of independent study, but quickly discovers, to her dismay, that Waterbury prefers doing almost anything but practicing his "art." 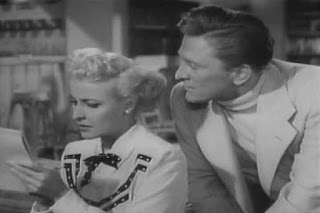 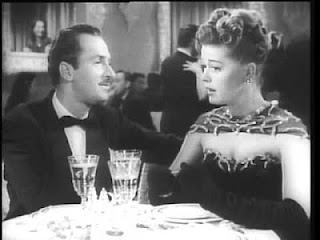 Between rejecting his advances and her attempts to reform him, Gaylord pens her own best seller, outdoing her former employer. He has no choice, since she has hooked him as well, but to marry her and reform. End of story? Fortunately not.


While these two carry out their timid romance, a whole cast of character actors rush in to make this film a comic delight. Most notable among them, is a sort of live-in butler-friend, Ronnie Hastings (Keenan Wynn). Writer and director Martins is quite obviously unsure of how to define his relationship to Waterbury; is he a kind of sardonice sponge, taking advantage of an old friendship or a sort of would-be lover, cooking, ironing, and housekeeping for his bachelor partner?* It hardly matters, for he is a failure at whatever he attempts except for the constant campy humor he dishes up to nearly everyone he meets, particularly the outrageous landlady, Horrible Hannah Reeve (played with perfection by Florence Bates). Instead of paying the rent, Waterbury awards her with Hasting's barbs:


Mrs. Reeves: I guess I'll run along.
Ronnie Hastings: Must you go? I was just poisoning the tea.


The marvelous Irene Ryan plays Mary, a singing, tattle-tailing cleaning woman with permanent nasal drip and Grady Sutton perfectly captures his role as soap-opera writing mamma's boy, as taxi-drivers, bookies, ex-lovers, a wannabe actress, and a detective run in and out of the Waterbury apartment to bring further comic mayhem into this pallid romance. None of this makes sense except as a kind of desperate attempt to keep the implausible relationship of the two leads from view. And it almost works. Indeed the director himself seems to be of two minds, ferrying his gifted cast back and forth between a slightly moronic romance or a series of comic riffs. Fortunately Wynn's character is there to point out the inevitable choice:


Ronnie Hastings: Is it informal, or shall I bathe?


Or, as he later describes the role the aspiring actress, Dawn O'Malley, would play, based on Waterbury's non-existent book: "You have to be insincere and be a moron."


Better that direction than taking the pious Gaylord—who seems to be attracted to the most undesirable of men, including the maxim-spouting publisher and the empty-minded mamma's boy—and her marriage to Waterbury seriously. Fortunately, the comedy boils over the romance:


Ronnie Hastings: I made a wedding breakfast...spaghetti and
meatballs.


*The fact that Waterbury's romantic interest has a male nick-name, Steve, and a last name that suggests quite the opposite of a heterosexual relationship, Gaylord, further spices the pot.
Posted by greenintegerblog at 7:46 AM