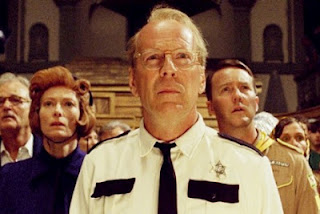 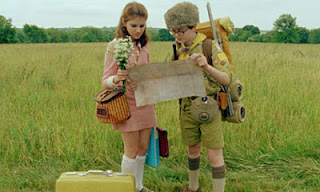 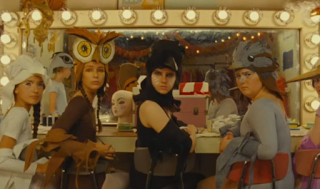 
Over the past several years there has been a spate of movies and plays devoted to and influenced by the tales of J. M. Barrie concerning Peter Pan. I reviewed two of those, Mabou Mines' Peter and Wendy (see My Year 2011) and, more recently, Rick Elice's Peter and the Starcatcher. Now we have Wes Anderson's Moonrise Kingdom that, although it has no direct references to the Peter Pan story, clearly has relationships to it. I suppose that in a time when "centers collapse"—as I maintain in this year's cultural annual—we should be prepared for children striking out on their own, seeking worlds or attempting to create new worlds that parents have failed at; or, as my movie-going companion, Thésèse Bachand put it, it is a time when children must parent the adults.


Anderson's films, as several critics have noted, have always occurred at the intersection of children's fantasies and adult lunacies, of which there can be no better example than Anderson's most recent film. Just as in his 2004 film, The Life Aquatic with Steve Zissou (see My Year 2004), Anderson's new film begins with a world in miniature, a representation of the sets we will soon encounter on a larger scale, which both underscores the theatricality that is so central to his art and suggests the toyland like conceptions of Anderson's fantasies. Color, decoration, and costume dominate as he introduces, one by one, the cast of eccentric beings who are at the heart of this director's vision. Of course, this may be seem coy and even fey to many moviegoers: both Bachand and my companion Howard found Moonrise Kingdom to be slightly irritating just on this account. Yet that is precisely why I so enjoy Anderson's art. From the very start, he makes clear that the story he will tell is "made up" out of series of component parts, a tale spun by a storyteller who seems to be creating the work as he goes along.


Anderson makes that process clear by beginning his work with Benjamin Britten's well-known Young Person's Guide to the Orchestra, in which the composer, using a theme by Henry Purcell, takes apart the orchestra instrument by instrument and rejoins them to help his listeners perceive how a work of music comes together, explaining how each instrument finds, metaphorically speaking, a role in the family of the whole. Anderson's metaphor is an important one, not only in representing his structural techniques, but in setting up his thematic concerns, since his heroine and hero, Suzy Bishop (Kara Hayward) and Sam Sakusky (Jared Gilman) have serious difficulties in finding their voices within familiar structures. Suzy is perceived as a troubled child—the fact of which she has discovered through a guide her mother has left on the top of the refrigerator—desperate to escape the hostile environment of the Bishop house, wherein her lawyer mother, Laura (Frances McDormand) —escaping her life in dreary affair with the local police captain (Bruce Willis)—is unhappily married to her lawyer husband Walt (Bill Murray), a man so disappointed with his lot in life that he wishes the impending storm would sweep him up and away, as if he might discover a new world similar to that which Dorothy encounters in Oz. Suzy is simply another sore issue in their failed relationship. When she goes missing the two respond:

Laura Bishop: Does it concern you that your daughter has
just run away from home?
Walt Bishop: That's a loaded question.


Sam is an equally troubled boy, but his situation is even worse than Suzy's, for he has no family, both of his parents having mysteriously died, leaving him imprisoned in a large family of orphans in the Billingsley compound (certainly one of Anderson's private jokes, Barbara Billingsley having been the name of the actor who played June Cleaver in the utopia of American family life, Leave It to Beaver). Notified of Sam's escape from an island scout camp, Mr. Billingsley reports that they cannot allow him to return home, to the shock and bewilderment of Police Captain Sharp and Scout Master Ward (Edward Norton). The precocious Sam has difficulty surviving not only in that home, filled with delinquents, but in the scout camp with his equally delinquent khaki-panted peers.


Sam and Suzy have met, quite by accident, one year earlier during a performance of Britten's children's opera, Noye's Fludde (see My Year 2011), based on the medieval mystery play. Showing us a flashback of their encounter and immediate attraction to one another, the director introduces yet more structural elements of his film, in particular, the pairing of animals and humans and the threat of a disastrous flood, which as the film's narrator (Bob Balaban) foretells, is about to settle over the New Penzance Island of 1965. Together, using Sam's scouting skills and Suzy's imagination and pluck, the two trek the island, attempting to outwit parents, police, scouts, and scouting master, as they seek a new paradise with one another on an isolated cove. For a short time they manage to elude their would-be captors, escaping, as Peter and Wendy, into a kind of magical Neverland where they might explore life as intelligent and sexual beings, hoping to establish the identities so rejected by all the others they have encountered before.


Ultimately, of course, they are tracked down and returned to a "civilization" that further demeans them, the Bishops enforcing tighter restrictions upon their daughter and the Billingsleys ousting Sam from the only home he has known via correspondence.


When the authorities receive a call from Social Services (hilariously performed by Tilda Swinton, dressed in a kind of Salvation Army-like blue garb), the Police Captain, Scout Master, and the telephone operator are appalled by her cruel efficiency as she hints that the wayward boy may be sent to an orphanage or even given shock-therapy for his behavior.


Even the bullying scouts, startled to hear of these potential tortures for their former camp member, decide to get involved, helping Suzy to escape and bringing her to Sam, now locked away on a boat belonging to the Police Captain. This time, they all run off together, Suzy reading to the boys just as Wendy has read stories to the lost boys and Peter Pan.


Having now been abandoned by an entire scouting troop, the perplexed Scout Master Ward, Police Captain Sharp, and the Bishops again go in pursuit of the missing children, with the Captain Hook and Crocodile-in-one, Social Services right behind them. For once, I will resist revealing the rest of this delicious plot, saying only that in the brewing storm, lightning strikes thrice and the adult world is devastated before the children are miraculously saved, Sam finding a home with the lonely Police Captain and Suzy returning to the "darling" Bishops' snug house. Just as Mrs. Bishop formerly snuck off for trysts with her Police Captain lover, so now does Captain Sharp bring his new-found son to the Bishop house so that Sam might secretly visit the young Suzy. Each has found a family, in themselves and with others, bringing their distinct voices into the orchestra of life.


Anderson cleverly repeats this theme once more even in the credits, as Sam narrates the orchestral components of composer Alexandre Desplat's original score.


Corny? Perhaps. Obsessive? Obviously. Charming? I'll end with a quote from Anthony Lane's excellent review of this film from The New Yorker:

Who knows, we may look back on Anderson's works as we
do on the boxes of Joseph Cornell—formal troves of frippery,
studded with nostalgic private jokes, that lodge inexplicably
in the heart.