muckin’ together
by Douglas Messerli


Scottish director Bill Forsyth has established himself, in films such as Gregory’s Girl, Local Hero, and Comfort and Joy, as the creator off somewhat offbeat comic works that leisurely spool out the lives of his characters in a manner that seems, at times, like a kind of surrealist fairy-tale set against a realist backdrop. 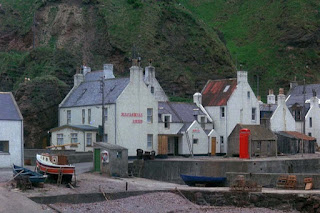 Local Hero, released in 1983, one of his very best, begins within dark towers of downtown Houston in a building owned by Knox Oil as the company board meets, while the CEO, Felix Happer (Burt Lancaster), falls into a snore-laden sleep. The board has determined to buy a small village in Scotland, Ferness, to create a large oil refinery.


Happer, clearly more interested in the stars more than the oil business, is currently being psychologically treated by a hack psychologist whose methods include heavy abuse, which Happer alternately accepts and rejects as the mood strikes him, finally ordering the truly “crazy” psychologist to be “shot down”: “There’s a madman on the roof. You’d better call the police to get some marksmen over here. Shoot him down. Shoot to kill.”


Happer assigns a purchasing assistant MacIntyre (Peter Reigart) to handle the deal in Scotland on the basis of his Scottish-sounding name. In truth MacIntyre is of Hungarian background (his immigrant parents thinking that MacIntyre sounded American), and he is better negotiating, as he puts it, via telex. But just being asked to Happer’s office is a sign of honor. Happer has little business advice, but is most specific that Mac, while in Scotland, keep an eye on the stars.


So does the thoroughly American Mac enter into a world he knows little about, a country of savvy survivors as we have seen in a long tradition of Ealing and other comedies such as Whiskey Galore! Meeting up in Aberdeen with a Scottish Knox representative, Danny Oldsen (Peter Capaldi) to drive to Ferness, they accidently hit a rabbit along the way and forced to sit out the night on the highway because of fog. Indeed by the time they reach Ferness they might as well have discovered Brigadoon, so different is this world from either of theirs.


The hotel, so they discover, is run by a clever businessman, Gordon Urquhart (Denis Lawson) and his sexy wife, Stella. Not only does he run the hotel, serve as waiter and head barman, but works off-hours, as Mac and Oldsen soon discover, as the town lawyer and investment counselor. Getting wind of Knox’s proposal, Urquhart, like a wily fox, suggests some disinterest, telling Mac to take a couple of days to acclimate himself to his new location, but immediately springing into a dance upon his bed: “Oh boy, are we going to be rich!”


Gordon quickly calls meetings with the locals to ask for their faith in him as the middleman—a meeting hilariously held in secret at the local church, the parish run by an former African, who, when Mac and Oldsen coincidently enter the churchyard, is sent off as a decoy:


Rev. Macpherson: You want to buy my church?
Mac: Not as a going concern.


With the two interlopers' backs turned away from the church entrance, we see the village citizens racing from the sanctuary; only Oldsen notices, but is so seemingly incompetent, he does not even mention the event. 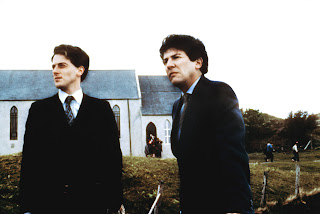 Days of slow haggling follow, as the citizens pretend disinterest while impatiently waiting for Gordon to settle on a price. What they cannot have imagined is that Mac, wandering the town’s beaches, enjoying the wonderful meals cooked up by Stella (including the rabbit, Trudy, whom the two men have turned into a pet), and the general congeniality of the village begins to alter Mac’s perspective, as he falls in love the Scottish way of “muckin’ through,” each villager not only taking on numerous tasks in life, but working together in a communal way. Stars fall, comets come into view, the Northern lights spin out colors of green, purple, and red, all of which Mac dutifully reports back to Happer from a small seaside payphone which is repainted a bright red.


Oldsen, meanwhile, has fallen in love with a Knox researcher, Marina (Jenny Seagrove), who mistakenly interprets the strangers’ arrival as a response to her proposal to turn the area into an institute for the study of the sea. She, in turn, nearly always sea-bound, seems to be a real life mermaid, which even further enchants the child-like Oldsen. 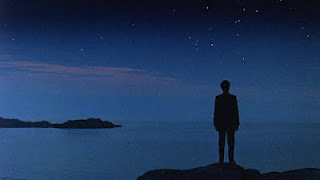 Negotiations continue, Gordon serving up a 42-year old whiskey to Mac. The Russians arrive in the form of a vodka-bearing sea-captain, Victor (Christopher Rozycki), who regularly visits the town and has invested money in a fund which Gordon oversees. And, in the midst of all these comings and goings, are the plans for a céilhid, a Scottish social gathering, with music and dance.


Mac has been so taken with the village that, drunk, he offers Gordon to exchange lives, he coming to live in Ferness, with the obviously capable Gordon going to work in Houston for Knox—with only one condition, that he leave behind Stella, with whom Mac has fallen in love.


MacIntyre: [both men are drunk] Would you leave Stella here with me?
Gordon: Sure I will.
MacIntyre: You’re a good guy, Gordon.


The scenes of the céilhid, with its rosy cheeked and freckled youngsters playing instruments, its arguing old men, and the punk-tattooed motorcyclist obviously attracted to Oldsen, are some of the best in the film. With his characters hardly speaking, Forsyth presents the absolute charm of the community, its social bonds and its spirited love. Even if the villagers themselves are all too ready to sell out and to abandon their lives, we and Mac realize it would destroy a blessed civilization.


Fortunately, Gordon soon reports, the beach is owned, on command of ancient decrees, by a sort of pack-rat scavenger, appropriately named Ben Knox, who is not at all ready to leave his paradise. Mac even offers him a series of world-wide beach properties to replace his current home, each of which Ben refuses. Reporting back to Happer, Mac is told to prepare for his bosses’ arrival. His helicopter comes flying in at the very moment that the villagers have begun to descend upon Ben’s doorless hut, which Happer mistakenly interprets as a “greeting party.” 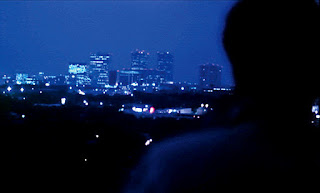 So does the owner of Knox oil meet the Scottish Knox, who shares with Happer a fascination with all things astronomical. At a one on one meeting they get along swimmingly, Happer, by conversation's end, willing to abandon his plans for a huge refinery in order to create an astronomical center in its place. The seemingly hapless Oldsen suggests he add Marina’s Institute for sea study, an idea which Happer quickly seems to embrace. Poor Mac is sent off back to Houston, gently stroking the shells he has collected from the beach in his lonely and soulless apartment. Back in Furness, the telephone ensconced in its small read box rings, but there is no one there any longer to answer it.


In short, the Furness villagers are saved—even from themselves! But who, one has to ask, is the local hero? Is it Gordon, who has bluffed not only Mac, the entire Knox industry, but, perhaps, even his fellow citizens? Is it Ben, who refuses to give up the world he inhabits? Or even Oldsen, who despite his seeming outsiderness, is, after all Scottish and, who along with Marina’s imagination, changes everything? Or is it the now isolated and lost Mac, who fell in love with the very world he was trying to negotiate the destruction of? Perhaps even Happer might be described as saving the village, coming home to a world he has only previously imagined. I suppose, with so many possible heroes, it doesn’t quite matter. The life Furness offered was its own salvation, a world that couldn’t afford to lose itself.


As I’ve reported elsewhere in the My Year volumes, I met Peter Riegart at a Los Angeles Greek restaurant, Sofi, some few years after publishing Paul Auster’s City of Glass trilogy (1986 or 1987), to discuss his hopes of transforming the first fiction into a film. He would have been perfect, it seems in retrospect, as one of the characters; but evidently he could not find a screenwriter to transform the inner dialogues of Auster’s fiction into effective film language. I now think, given my understanding of film, I might have been able to do that. But at the time, I was young and had no thoughts of screen-writing. Besides, the film rights belonged to Auster and his agent.


I did very much enjoy my lunch with Peter, who seemed so straight-forward and self-demeaning that one might never have thought of him as a successful film actor.


As I have also reported, I met him several years later at the 80th birthday party for my friend Joseph Perloff (in 2005). There we had a delightful conversation about his appearance in the DVD version of the Bette Midler musical Gypsy, in which I described the wailing Riegart as a delightful foil for Midler. He revealed the fact that he had been in an affair with Midler for many years in the 1970s.


Reigart has not appeared in a great many movies since, and I wish he might be rediscovered. His quiet, understated presence is perfect for directors such as Forsyth.
Posted by greenintegerblog at 7:41 AM