Eleanor Antin | The Man without a World

disappearing from history
by Douglas Messerli

Eleanor Antin (screenplay and director) The Man without a World / 1991

Yet another of Eleanor Antin’s personae, Yevgeny Antinov was supposedly a Russian-Jewish filmmaker whose films, thought to be lost, were rediscovered in Soviet archives. His two major silent films, Last Night of Rasputin and the shtetl-based The Man Without a World, fill the gaps in Russian cinema, giving us a view of what should have been depicted, even if it was not. In a prologue to the film, Antin tells us that having gotten into trouble with Stalin, Antinov fled to Poland, where, in Cracow, he encountered a couple of affluent American entrepreneurs, who were willing to back a film on shtetl life for the “Jewish nostalgia market” back home, but notes “For a secular urban Jew, doing a Yiddish shtetl film must have presented something of a problem.” The Man Without a World appears as if actually were created in the late 1920s, a mix of cinematic styles that uses the tropes of figures from Yevgeni Bauer to Sergei Eisenstein. And the screenplay mixes elements of Isaac Babel, Shalom Aleichem, and other Jewish writers.


Indeed, Antin’s film is so convincing that it is hard not to imagine it is not a real document. But, of course, it was not filmed by a Russian-Jewish filmmaker of the early twentieth century, but by a sophisticated woman artist well aware the century’s film tradition, with unusual tips of the hat in Antin’s work to Bergman and Fellini! And in that sense, this is only an “imaginary” film, even if it feels like a work that should have existed.


For all that, however, Antin’s film is a splendid piece of cinema-making, a remarkable piece that, while pretending to be something it is not, is in itself special.


The story is a simple one: a beautiful country girl, Rukhele (Christine Berry) is in love with a local boy, Zevi (Pier Marton), but before the couple can even express their love to each other, a group of performing gypsies arrives in town, including a handsome Magician (James Scott Kerwin), a Gypsy fortuneteller (played as a transvestite by Sabato Fiorello), a Strongman (Nicolai Lennox), and a beautiful Ballerina (Eleanor Antin), the latter of whom immediately attracts the eye of Zevi, who soon joins the group in the local bar with “the Intellectuals,” a Zionist, a Socialist, a Cynic and, later two strange women, a sexy Anarchist, and a Bomber. Rukhele is quickly forgotten until she appears at the bar to tell Zevi that his mother is dying and desperately wants to see her wayward son for one last time.


Zevi’s sister, Sooreleh, has been gang rapped as a young girl by Polish boys, and is now mad. And the old woman curses her bad luck as the Angel of Death jumps onto her belly, putting the woman out of her misery.


After the funeral, Zevi is briefly reunited with Rukhele, realizing her worth and seducing her. The girl soon finds herself pregnant, but by that time Zevi has returned to the Ballerina and the bar, performing his poetic dramas to the locals. Perceiving that her daughter is with child, Rukhele’s mother quickly plans to marry her off to the local Butcher, whom the daughter finds ignorant and course. But she has no choice.


When the village fanatics, however, kidnap Sooreleh in order to perform an exorcism upon her, Rukhele again encounters Zevi, who eventually discovers his one-time lover is pregnant with his baby, and determines to mend his ways. Despite the fact that wedding contracts have been signed with the Butcher, he will marry Rukhele instead. Going to work for his tailor future father-in-law, Zevi clumsily tries to take up the new trade, without much success.


Meanwhile, the women celebrate the upcoming wedding at the house and at the ritual wedding bath. The couple are married, and the women again gather over the bride for the traditional cutting of her hair and shaving of her head. While waiting for Rukhele, however, Zevi and others encounter the drunken Butcher who attempts to kill Zevi; pulling the knife away from him, Zevi stabs his enemy to death just as his new wife returns to the celebration.


Determined to run away with her new husband, Rukhele is dissuaded by the Gypsy ballerina, who explains that Zevi and she will be living without money in a small, cold, basement apartment, predicting that her milk will dry up and their baby will die, that Zevi, a poet afterall, will be associated with dangerous men and be arrested, etc. A country girl, Rukhele, it is clear, will be unable to survive in Warsaw.

“Zevi is a poet. He would write. You would starve. There is no
help for it.”


Realizing the truth of the prediction, Rukhele remains behind while the gypsies and Zevi walk, suitcases in hand, down the road to Warsaw, the Angel of Death following after. A final crawl of sentences occurs on the screen, restating one of the major themes of this lovely film, that this world will soon be disappearing from history. 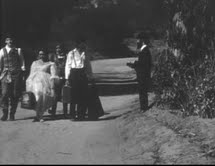 The story, fitting the pattern of numerous such tales, might almost have been written by Isaac B. Singer. But the great wonder of this film lies in its images, several of which I find the most notable: the first gypsy episode, where the Magician magically produces eggs, one by one, handing them to the Egg Seller (Page duBois); Sooreleh’s mad “dance of death” with the dead women at the cemetery; the dancing Rabbi (Jerome Rothenberg) in his attempts to lure the dybbuk from Sooreleh’s body; the hilarious chase through Rukhele’s house, particularly by her mother, as they try to recapture the fowl that the Butcher has brought his love; Rukhele’s ritual bath whereat two young girls embrace in an impassioned kiss, trying out their love for one another before they encounter the opposite sex; the bald Rukhele, tears running from her eyes, as she is about the lose Zevi; and the final Bergmanesque walk down the road by the gypsies and their new cohort, Zevi, followed by the Angel of Death are particularly evocative. Even the very first scene, where an old Hassid builds up the market through a series of stills with magical claps of his hands presents us a wonderfully magical sense of filmmaking. These images and others are unforgettable, and help to transform Antin’s imaginary movie into something beyond what might have been, in other hands, a kind of academic exercise in imitation.


If there was never actually a filmmaker like Yevgeny Antinov, we, nonetheless, desire his existence! And my only regret is that he did not leave more films behind at his death.*

*Antin did attempt to make more films, but could not get funding.


In 2000 my press, Green Integer, published the screenplay of Antin's film. In one of the early showings of this film, I sat at the Cinemafamily theater in Los Angeles next to Marcia Goodman, Eleanor's sister, who played Rukkele's mother in the film.
Posted by greenintegerblog at 7:29 AM