Elia Kazan | A Face in the Crowd

the courage of his ignorance
by Douglas Messerli

Budd Schulberg (screenplay, based on his own story), Elia Kazan (director) A Face in the Crowd / 1957 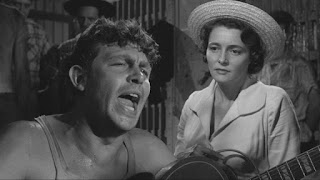 Over the years, as a former “southernist” (definition: a writer about the literature of the American South) I have developed a late-in-life admiration for country-western music and for the kind “Grand Ole Opry” ballads which for years I couldn’t abide. I was also never a true fan of Andy Griffith’s kind of mild, down-home philosophizing, and, although I saw Griffith early-on in No Time for Sergeants and, with family surrounding (it would have taken a revolution in my house to have asked for different TV fare), I endured numerous episodes of the Griffith stories in Mayberry, replete with his hometown, cornball flavored miniatures. My father loved it; he was a great believer in the common man, with whom he felt throughout his life he had ties despite his having reached an educational plateau and position of educational power that made him skeptical of their values. 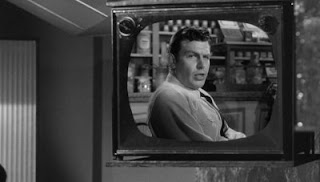 I should have been prepared, accordingly, for Schulberg’s and Kazan’s vicious satire of just such a world. For at one time, I might have even shared their moral disgust. But this time round (my second or third viewing of A Face in the Crowd) the utterly appealing “Lonesome Rhodes,” Griffiths larger than life portrayal of a post-Will Rogers’s figure unearthed by the journalist-cum-anthropologist Marcia Jeffries (Patricia Neal), I have to admit, was coarsely appealing “honest”—at least in terms of the character, if not the writer and director—in his appraisals of the ruling class. His down home, off-the-cuff, singing and statements say everything about his manipulators such as Joey DePalma (Anthony Franciosa), Mell Miller (Walter Matthau) (who quips, observing Lonesome’s on-line tirades: “I’ll say one thing for him, he’s got the courage of his ignorance.”) and, later, Senator Worthington Fuller (Marshall Neilan), as he dishes out their dirty water through homespun colloquialisms. That might have made for a kind of wonderful, satiric movie in its own terms, a more sophisticated version of No Time for Sergeants or even a slightly more complex version of Capra’s sadly overlooked study of the same issue in Meet John Doe, which, at least, treats the corn-shuck honesty with disguised and confused respect. But Schulberg and Kazan have another drum to beat, and have little room for an emphatic or even curious evaluation of Lonesome Rhodes and what he might possibly have represented.


This Lonesome Rhodes is, from the get-go, a fraud, a man of the people perfectly willing to use his audience as a tool, not only for easy profits, but, most importantly, power. For Lonesome, his whole community is “just my flock of sheep!”


Lonesome: Rednecks, crackers, hillbillies, hausfraus,
shut-ins, pea-pickers—everybody that’s got to  jump
when somebody else blows the whistle. They don’t
know it yet, but they’re gonna be “fighters
for Fuller’ [the rightist politician who has paid enough
money for his support]. They’re mine! I own ‘em,
Marcia, you just wait and see.I’m gonna be the power
behind the president—and you’ll be the power behind
me! 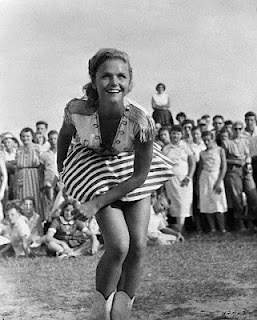 Once the author and director have established their likable figure as such a sham, there isn’t much more to say. There are wonderful moments of betrayal, DePalma’s sleazy interferences, Jeffries’ displaced love for her Frankenstein, and Betty Lou Fleckum’s (Lee Remick’s) flashy, baton twirling entwinement of herself with the errant lover (Jeffries: “Betty Lou is your public, all wrapped up with yellow ribbons into one cute little package. She’s the logical culmination of the great 20th-century love affair between Lonesome Rhodes and his mass audience.”)—but none of these can save the film from its dreadful tumble into misanthropy. Lonesome Rhodes, so the film proclaims—again and again and again—is a manipulator, a country hokum manufacturer of pure vulgar ignorance, worthy of the on-line betrayal by Jeffries of her would-be lover, turning up the volume (oh how many political figures have been just so betrayed by open mikes and evil-minded engineers) to reveal his description of his admirers as “idiots, morons, and guinea pigs.”


In the case of this film, however, the evil-minded engineers have been its creators all along, smugly determined that its hick hero gets his due, without them comprehending any of his natural appeal. As I said, I have never been a great admirer of Andy Griffith, but in this role he certainly deserved better. And, in that context, it saddened me to hear of Griffith's death on July 3 at the age of 86.


In his role as a liberal agitator of American political causes, Kazan has always had a problem of credibility, particularly after he named names to the McCarthy committee; but here we have to recognize that he is also basically intolerant of a large swath of American folk culture, dismissing it with the slap-down petulance of an homegrown American fascist, a role which he has, perhaps mistakenly, deflected upon his far a more innocent hero. The fears the author and director project about the rising American TV industry, have also been realized in the very film they have created—despite the film’s National Film Registry acclimation.