Guy Maddin | The Saddest Music in the World

the problem with glass
by Douglas Messerli

George Toles and Guy Maddin (writers, based on a story by Kazuo Ishiguro), Guy Maddin (director) The Saddest Music in the World / 2003, USA 2004


Beginning in late 2011 and more increasingly in 2012, I began to have problems of falling upon getting up in the middle of the night to go to the bathroom, suddenly blacking out for a few seconds to find myself on the floor, often in great pain. The problem was, apparently, my drugs for high blood pressure. One, in particular, Clonidine, reported complications at least three times, in its list of possible "side effects,” of “dizziness.” One such fall was into a glass mirrored closet, facing our bed. Although the wall itself was backed with sticky paper to prevent the glass from falling out en masse, numerous small pieces of glass embedded themselves in my back and, for days, appeared upon our carpet floor. The following morning I was scheduled for an endoscopy, which was cancelled—might anyone be surprised—because of high blood pressure. The anesthesiologist suggested I get rid of the Clonidine, which my doctor and I did, after weeks of trying to discover another successful mix of pills to protect me from high blood pressure. We were successful, although many of my new drugs also warn of “dizziness;” (Diovan, one of my major pills, warns of just such an effect).


The point is, I have come to fear falling (I recently fell again, turning my cheek into a good resemblance of the Batman’s “The Jocker”—terrifying given it happened on the same day when James Holmes, identifying himself as The Joker, murdered 12 people in a Colorado movie theater) —and, more importantly, I am now terrified by the effects of glass.*


Back in February of 2012, accordingly, I wrote a poem titled “The Problem with Glass,” which I’ve reprinted below:


The Problem with Glass


The problem with glass
—it breaks
it striates a wrist, the back
shattering shards
sever almost everything in sight.
The heart is made up of tissue
the brain corrugated mass.
Glass is recomposed sand.
People who live in stones
should not throw ice. 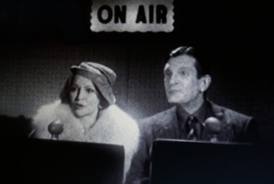 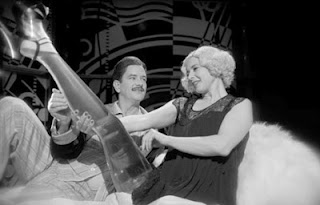 For the ordinary or even casual reader of cinema reviews, all of this introductory information may seem entirely beside the point—and I might agree—except that Guy Maddin’s film does not behave as an “ordinary” film might. Maddin's movie, like its own structure, seems, at times to engulf everything, crying out for viewer collaboration. Filmed in black-and white, with the slightly out-of-sync sound of films of the 1930s (the film is set in 1933 Winnipeg, Canada), using various film formats (regular, Super 8mm, Super 16mmm, pale-blue-salmon colored two-strip Technicolor) and employing numerous old-fashioned camera tricks (forced perspective, multiple exposures, and rear projection) that evoke the films of Fritz Lang (Metropolis), James Whale (Frankenstein), Tod Browning (Freaks), G. W. Pabst, Erich von Stroheim, and numerous others, including—since The Saddest Music in the World is also a musical—the films of Busby Berkeley, and allying itself with more contemporary cinema such as Jack Smith's Flaming Creatures and, in its serial contest format, Christopher Guest's Best in Show and A Mighty Wind, this work is a perfect example of a participatory aesthetic. Maddin not only relied on the considerable talents of his cinematographer, Luc Montpellier, but armed many of his cast members with hand-held cameras to add to the immediacy of several scenes. In short, to call this film pastiche is almost beside the point; it is like a woven-carpet of a knowledgeable film-goers memories, a veritable encyclopedia of clips and frames simulating film history. And it that sense, Maddin's film, at its heart, is an imaginary one, a film that dreams film.


To say that is not to declare the director's work is unoriginal, however one defines that. For there is perhaps no movie quite like The Saddest Music in the World, no film ever made that whole heartedly embraces the serious musical, camp humor, melodramatic, sexual, and just plain comic tropes that this work does.


For the fourth year a row, Winnipeg has been named by The London Times as "the world capital of sorrow," and Lady Helen Port-Huntley (Isabella Rossellini), the wealthy beer heiress, is determined to raise prohibition-free Winnipeg's beer sales by sponsoring an international contest, with a $25,000 dollar prize, to determine which country has the saddest music in the world.

By coincidence, the hard-hearted, easy-going Broadway producer Chester Kent (Mark McKinney), down on his luck and accompanied by his current girlfriend, Narcissa (Maria de Mediros) (when asked "Are you an American?" she replies "No, I'm not an American. I'm a nymphomaniac."), has just arrived in town. When he hears of the prize money, he quickly pays a visit to Lady Helen Port-Huntley, attempting to become the entry from the US.


He and Port-Huntley, we gradually discover, have once had a relationship or, perhaps I should say, a series of unfortunate encounters, beginning with  Chester's father Fyodor (David Fox), who, after the death of his wife, fell in love with the young Port-Huntley. Cuckolded by his son, the former doctor grows alcoholic and—one night while the son is driving with Port-Huntley performing fellatio and temporarily obscuring his view—crashes into their car, pinning one of girl's legs under the overturned vehicle. Before Chester can prevent him, the drunken Fyodor amputates the leg in order save her; however, he saws off the wrong one, and before the evening is over Port-Huntley is legless. Despite that horrific event, however, the bitter Port-Huntley has still harbored deep love for Chester, and permits him to be the US representative. Fydor, still eager to mend his relationship with Port-Huntley, begs her to be Canada's representative.


In a twist of the plot, Serbia's representative, the morose and hypochondriac cellist, Gravillo the Great, is actually, so it soon revealed, Chester's brother, Roderick, whose son has died and whose wife has disappeared. This unholy trinity duke it out in a series of contests between Mexican, Thai, Spanish, Cameroon, Indian, Scottish and other world entries, each proclaiming their music to be the saddest. Overseeing this absurd sequence of musical numbers are two commentators who glibly speak of the various national types in a manner that Fred Willard perfected in Guest's film about the National Dog Show: "No one can beat the Siamese when it comes to dignity, cats, or twins."


Fydor's sad rendition of "Red Maple Leaves" is quickly eliminated, but the two brothers—Chester dishing out razzle-dazzle spectaculars such as "Swing Low, Sweet Chariot" and Roderick dolefully sawing away at Jerome Kern's and Oscar Hammerstein II's "The Song Is You"—come closer and closer to a stand-off between their off-stage fights. When it turns out the mysterious Narcissa is also Roderick's missing wife, the battle grows even more intense until finally their mutual disgust for one another boils over.
Underlying all these hilarious shenanigans is a darker tale of a world encased in glass. A short listing of events concerning glass might even summarize the final outcome of the story. The Winnipeg Maddin has whipped up is covered with ice; in the streets hockey players spin out of control as perpetual skaters glide by. One of the central slogans of Port-Huntley's beer copy repeats the refrain "have another glass," and throughout the film drinkers raise their glasses as they down the brew. Knowing that Port-Huntley is allergic to both leather and metal, Fyodor has carefully created a pair of glass legs for her—filled with beer! The Baroness is delighted with her new bright and glittering legs but still rejects her former suitor, and the depressed Fydor quickly consumes the beer from earlier incarnations of the glass legs and, in a stupor, falls through a glass ceiling over the contest arena to his death. Encountering Narcissa once again, Roderick drops the glass bottle containing his dead son's heart, which, as it shatters, implants a shard into the heart itself. In the midst of the final performances between Roderick and Chester, the soulful chords of Roderick's playing shatter Port-Huntley's new legs at the very moment she herself has gone on stage in Chester's grand retelling of an Eskimo kayak tragedy. In revenge for his thoughtless behavior, she stabs Chester in the stomach with a shard of the glass legs.


Smoking one last cigar before he goes to hell, Chester plays on the piano perhaps the saddest song of all as the whole arena goes up in flames.


So, in the end, you see, my little poem seems appropriately participatory in a work that has employed so many thousands of collaborating images.


*I had had an even more dreadful encounter with glass back in the early 1990s. Coming home from a trip abroad, I arrived at my office to realize that I had locked my keys away in the suitcase I had left inside. Only my assistant editor, Diana Daves, had another set of keys, but she was not scheduled to appear until hours later in the day. Attempting to push open a loosely locked French door, I suddenly discovered that my left hand had gone through a glass panel. Blood suddenly spurted out, forcing me to  run to a nearby doctor's office to have it bound up. At the hospital where they ultimately sent me, I was told I had nearly severed my thumb and had a deep cut across my wrist. I have both of those scars still today.