two sides of a coin
by Douglas Messerli 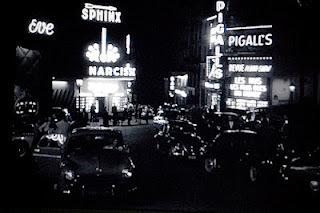 To describe Bob le Flambeur as a gangster film, which many critics and film dictionaries have, is a bit like describing the musical Guys and Dolls as a film noir. Yes, Bob, the gambler, has, twenty years before the film begins, been involved in a robbery; he has even served time in prison. But the dapper gambler, friend of the chief of police, seems far more like a character out of Damon Runyon's head than having sprung from any of the American gangster movies which Melville so loved.


If Bob (Roger Duchesne), is a "hood," as he describes himself, he is also, as the narrative voice-over tells us, an "old young man," a figure out of the old school who has a sentimental heart and is beloved by the inhabitants of the Montmartre underworld he frequents. He is a kind of angel in the midst of hell—Melville establishing the heaven and hell dichotomy of the Paris district in the first few frames of the film. Not only do his friends, waitresses, and waiters admire him, but Bob has an established reputation as a gentlemen, has a young acolyte, Paolo (Daniel Cauchy), and early in the story, takes in a young woman, Anne (Isabelle Corey), who without his help would have soon become a "pavement princess," a woman of the streets. Unlike all the others of his world, he lives in relative comfort, with a daily housekeeper to care for him. 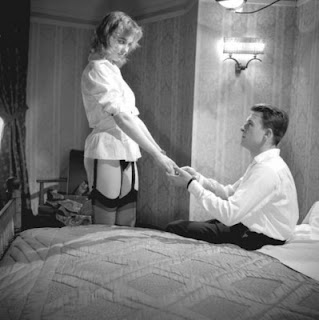 Yet Bob has a problem: he is a inveterate gambler, who in the first few frames of film, bets away his bankroll and is faced with a wave of bad luck. How can he resist, accordingly, the temptation, when a compatriot safe-cracker reports that he has been told that the Casino in Deauville sometimes contains over 800 million francs?


With cool precision, Bob proceeds in his preparation for the robbery, Melville delighting in the methodical process of planning a successful heist. Finding a backer in McKimmie (Howard Vernon), an inside man in the croupier, Jean (Claude Cerval), and employing the services of Paolo and other thugs, the gambler brilliantly takes us through the rehearsals: an early version of cracking the safe, a later, more sophisticated version of safe-cracking involving earphones and an oscilloscope, a walk-through of the planned robbery in a field where every aspect of the casino is outlined in chalk, even a pep talk. No coach could have better practiced his team.


But these men, including Bob, are, after all, only humans. And one by one, they crack—not the safe—but psychologically. For Melville in this film, women are the enemy. First Paolo tells Anne, with whom he has fallen love, about Deauville, and she, in turn, spills the beans to a local pimp, Marc (Gérard Buhr), who has saved his neck by promising the police he will give them "information." Then there is the croupier's social-climbing wife, Suzanne. Even the faithful bartender, Yvonne (Simone Paris), sensing something's up, expresses her worries about Bob and his plans. Although Marc is killed by Paolo, Suzanne and Jean get word to the police. The inevitable seems about to happen. 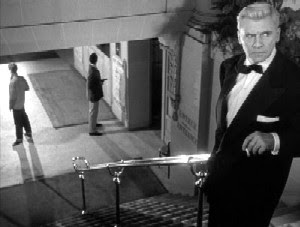 In Melville's world, just as in Damon Runyon's, however, nearly everyone stays true to his type. And once Bob is left alone in the canyons of casino gambling, he simply cannot resist doing what he has done all of his life: gamble. This time, however, he wins, again, again, and again, taking in his own fortune in more ways than one.


The inevitable does occur. The heist is foiled by the police, Paolo shot and killed (he has, after all, been the only one in the film who has actually used a gun; Bob wants weapons only as symbols, not as tools of destruction). Poker faced even after holding the dead body of a boy that might be described as his son, Bob expresses the mantra of any gambler: "He knew there are always two sides of a coin."


Bob is arrested along with his cohorts, but even the head of police suggests he will get only four years since he has not actually been on the scene for the robbery itself. Bob, however, has a better wager. With a good lawyer he might get away with no prison time at all. And he now has a fortune to gamble away for the rest of his life.


Melville's thoroughly loveable villain has been saved simply by being true to himself.