Peter Yates' comedic heist caper is a successful film, despite being pulled at every moment in two directions. The first few scenes of the film reveal its slightly schizophrenic nature as the always handsome Robert Redford, playing Westlake's Dortmunder, is slowly taken through the various stations of release before being freed from prison. There is something serious about his demeanor, as if this prisoner has learned his lesson from time in inside, and is about to go straight. Meeting the warden at the last door just before his release, however, Dortmunder summarizes the problem. Warned that this will be his last chance to abandon his life of crime, Dortmunder sweetly mutters, "My heart wouldn't be in it." 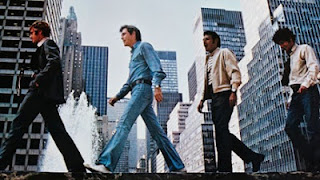 A few minutes later we seem to be in another movie, as his brother-in-law, Kelp (George Segal), ineptly tries to chase him down with a stolen car to return him to the city. Clearly Kelp is hardly able to drive and Dortmunder terrified of being involved again. At his sister's house, however, it is a presumed fact by all, including the compliant sister, that he will be swept up into a new caper, the robbery from a museum of a precious diamond claimed by warring African countries. Kelp has already made contact with a United Nations spokesman from a mythical African nation, Dr. Amusa (Moses Gunn), who is willing to pay $100,000, $25,000 for each person involved in retrieving the "hot rock." A quick visit to the museum to scout out the viability of the robbery reveals Dortmunder's philosophical proclivities as opposed to the ineptitude of Kelp:


Dortmunder: It's good, and it's bad. There's a guaranteed return,
and that's good. But the guarantor is Amusa, and Amusa's
a rookie, and that's bad. But it's an easily transportable object,
and that's good. Only it's in a rotten position in the museum,
30 steps to the quickest exit, and that's bad. And the glass over the
stone, that's bad too, because that's glass with metal mixed in it,
bulletproof, shatterproof. But the locks don't look impossible, 3,
maybe 5 tumblers. But there's no alarm system, and that's
the worst, because that means no one's going to get lazy
watching, knowing the alarm will pick up their mistakes.
Which means the whole thing has got to be a  diversion job, and
that's good and that's bad, because if the diversion's too big,
it'll draw pedestrians, and if the diversion's not big enough,
it won't draw that watchman.
Kelp: Dortmunder, I don't know where the hell you are, or what
the hell you're   saying. Just tell me, will you plan the job?
Dortmunder: [pauses, then smiles] It's what I do. 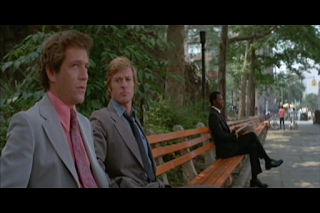 A few hours later the two have contacted an explosives expert, Greenberg (Paul Sand) and a driver, Murch (Ron Leibman), and the heist is on.


Yet, it would just as reasonable to refuse to describe this film as having much to do with a "hot rock" heist. The comic diversionary tactics of Murch alternate with the intense lock-breaking scenes. Kelp's self-doubt interrupt Dortmunder's cool caution, and Greenberg's inability to snatch the diamond once they have struggled to lift the glass, almost bungles the whole job. Although they get their diamond—or Greenberg grabs it, at least—the carrier is arrested, forced to swallow the rock.


The rest of the film follows their improbable adventures as they try to reclaim their glittering booty by: 1. breaking into a state prison to free Greenberg; 2. breaking into a New York police station via helicopter (at one moment flying over the South Tower, under construction, of the former World Trade Center)  where Greenberg claims to have hidden the jewel after it has proceeded through his digestive tract; 3. breaking into the bank vault of Greenberg's father, Abe (Zero Mostel), a slimy lawyer who has stolen it from his own son. Each time Dortmunder's precisely complex machinations succeed only to fail—all except the most ridiculous of procedures: hypnotizing the vault banker to plant in his mind the code "Afghanistan Banana stand," in order to trigger the man's hypnotic state, allowing Dortmunder access into Abe's safe box. This is not so much a movie about a robbery as it is about an habitual crime. As Dr. Amusa quips: "I've heard of the habitual criminal, of course. But I never dreamed I'd become involved with the habitual CRIME." 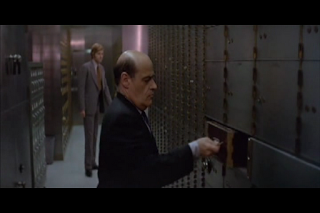 Abe, who has now joined forces with Dr. Amusa, arrives at the bank just as Dortmunder joins his companions in a waiting car, the diamond finally is safe his pocket.


What they plan to do with the diamond remains vague, since both Amusa and Abe knows who they are. Presumably they have no choice but to claim the $100,000 payment Dr. Amusa has promised, leaving Abe in the lurch. But this hardly matters because we are almost certain the cool deep-thinking Dortmunder will have to once more face the comic incompetence of Kelp, Murch, and Greenberg, exploding all his well-thought plans. But for the moment, at least, his crime has, at last, paid off. The heist movie and comedy have finally been married.