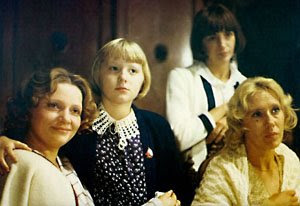 Wiktor Ruben, who manages a farm connected to a school for blind girls, has just lost his "friend," Jurek. Standing over the gravesite of a man whom Wiktor describes as "ordinary" (but whom the priest later reveals as a poet), he falls to the ground, temporarily fainting. The doctor suggests Wiktor take a few weeks off, returning to a popular summer spot where he has, before the war, regularly visited, and where Wiktor's aunt and uncle have a farm.

Wiktor arrives at the neighboring farm, Wilko, a peacock running ahead of him which he seems to be prodding with a horse crop. Indeed, what he discovers at Wilko needs all the control of a man's pride that is possible, for inside the house sit five sisters, Julcia, Jola, Zosia, Kazia, and Tunia, four of whom he has known—along with another sister Fela—from his childhood visits to this spot. The women have all grown a bit older, and what one can imagine as their lithe, youthful bodies have rounded out a little, but they are all still quite glorious beings, the first four now married with children. They are astounded to see Wiktor after a fifteen-year absence, but it is obvious that they are also delighted by his return; he is still fit and handsome, and they, it quickly becomes apparent, were, at one time, all in love with him.

"Where is Fela?" Wiktor wonders. She is dead, and slowly it dawns on the viewer, that her death has been connected to his departure so many years ago.

Wajda's quiet and sumptuously beautiful film appears, accordingly, to be headed in the direction of a meditation on past and present, focusing on these beautiful women, none of whom, apparently, won his heart. Tunia, not of age on Wiktor's previous visits, is now solicitous of his love. Certainly his aunt and uncle encourage him in that direction, but as his aunt mentions, divorce is always a possibility in the Wilko house; for the women of Wilko are all unhappy in their marriages, particularly the eldest, Julcia, whose husband now penuriously controls the estate. While it is clear that she was once beautiful, in her hairstyle and dress she now looks quite maidenly, having long ago retreated into her intellect—and kitchen, where she cans hundreds of jars of jellies. 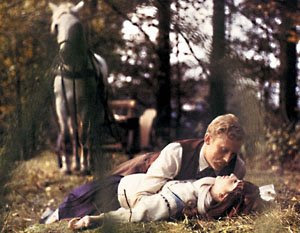 Accordingly, while Tunia, who fondly reminds Wiktor of the dead Fela, devotedly watches over his comings and goings, each of the daughters attempts to rekindle her past love and perhaps win him over to her cause. Clearly Wiktor is attracted to and amused by all these appealing—and sometimes not-so-appealing—specimens of flesh. And Jola, specifically, seems quite ready to fall into bed with him. Yet, as Dan Schneider has noted in an online review of the work in 2007, instead of greeting these attentions with joy, Wiktor (played by Daniel Olbrychski) "deftly conveys the sense that the character is not in conscious control of his reactions, with seemingly involuntary twitches and facial expressions" that, I would further argue, reveal his discomfort in the various situations. Asked why he never chose any of them for marriage, he admits he was a "coward."

That has, in turn, led many critics to see the film as a portrait of a failed man, a man unable to accept the joys of life; Wiktor seems more comfortable, as he mentions earlier in the film, working; life's pleasures seem as allusive now as they evidently were in his youth.

As Schneider also astutely points out, however, the "lambs" of Wilko—who seem so willingly led to sexual slaughter—live in a world, as one of the sisters describes it, where "wolves are eaten by the sheep." If the sisters work as a kind of sexual unit, they also cleverly manipulate the men around them, and as each secretly vies for Wiktor's love, they employ everything from military-like maneuvers to various kinds of passive aggression.

In Wiktor, however, unlike their equally unhappy husbands, these "maidens" have met their match. Despite all their ploys and gestures, their suicidal threats, he remains aloof, as if, he suggests, he were "a strange soul from another planet." Accordingly, the past repeats itself, as Wiktor once more leaves these lovely "girls" of Wilko in the lurch in order to return to a world of the blind.

Perhaps Kaminski and Wajda were attempting to create just such a shadowy figure, a man trapped in his own indecision, a being unable to truly engage in love. But I believe, if one carefully focuses on the earliest scenes of this film, it becomes quite apparent why Wiktor has chosen none of these manipulative women for his wife.


The only truly emotional response he demonstrates in this work, one must remember, is his collapse at the grave of his friend, Jurek, the man he describes, not simply as his best, but his only friend. Without pinning Wajda's subtle film to one reading, I would venture to suggest that Wiktor is gay*, and that the cowardice to which he admits, is not his inability to fall in love with one of the Wilko women, but his refusal to admit his love of men. He is, indeed, from another planet, a world outside of the orbit of these provincial beauties. His world is not so much a world of the blind—even though he is surrounded by the blind—but of the hidden, faced as he is by an unnamable love, now forever lost.

*I should note that nothing in Iwaszkiewicz's original story, nor in Kaminski's script, for that matter, says anything specific about Wiktor's sexuality. Jurek is simply described as his "only close friend." The key passage in Iwaszkiewicz's story begins with Wiktor telling the local doctor of his relationship with Jurek: "He couldn't sleep at night, he felt very nervous and he couldn't work at all. And he couldn't stop thinking about his friend who had died of consumption two months earlier. He told his story casually, but he couldn't talk about Jurek without emotion. Jurek was the only close friend he ever had. He was a seminarist, the nephew of the camp's Mother Superior, not an unusual person, but Christian, quiet and good."
Posted by greenintegerblog at 9:00 AM