Alone with God
by Douglas Messerli

In some ways the story of this great film, the trials of the saintly Joan of Arc, is similar to the story of the film itself. When Dreyer’s work was first released in France, the Archbishop of Paris demanded changes, and the film was severely truncated; when the movie failed at the box office in the early 1930s, moreover, it was released in a version with 20 minutes deleted. Even worse, the original negative was burned in a fire in Germany, and the French negative was also believed to have been destroyed in the studio where it was housed. Accordingly, few viewers knew the film in its entirety until a print of the original cut was found in a janitor’s closet of a Norwegian mental hospital in 1981. That print was restored and rereleased in 2003. As Gary Morris summarizes in the on-line Bright Lights Journal, “Like Joan, it [the film] was ‘denounced, cut, and burned,’…a story...that in its way is as fascinating as the film itself.” 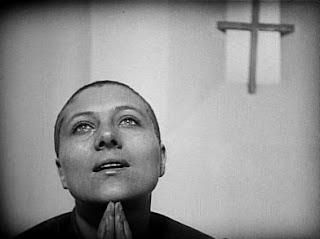 Dreyer hired his brilliant actors from May to November of 1927, insisting that they remain in their roles for that period of time, even to the point of keeping their hair cut. But it is clear that Dreyer also had chosen his cast members for their fascinating faces (one is reminded throughout the film of Nora Desmond’s declaration in Sunset Boulevardthat the actors of the silent films “had faces!”). Through his constant intercutting of images, dramatic positioning of characters in relation to each other, and the insistent and often discomforting tilt of the camera, the director confronts the pure, rounded face of Joan (brilliantly played by Maria Falconetti) with men who appear to be less human beings than tortoises and toads out of paintings by Hieronymous Bosch and Pieter Breughel. The guards anachronistically appear like Prussian soldiers, and the chorus of British torturers seem out of later comedies of The Three Stooges. 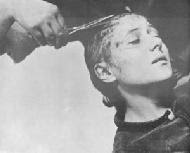 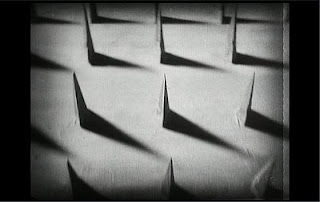 Throughout the series of trick questions, mockery, and terrors with which she is faced, Falconetti (in her only film role of her life) plays Joan as an innocent, gullible, and yet religiously committed child of nineteen who, while clearly fearing all about her, speaks out in pure defiance against the clergy’s demands. Insisting to know whether she sees herself as in a “state of grace” in the hope that she may reveal a heretical view of herself in relation to God, the judges are stymied by her utterly innocent answer, which also reiterates her understandable dissociation of self:

In Dreyer’s vision of Joan’s world, nearly all is centered upon gender: it is a patriarchal and all-male world she must face and the very declaration that she, as a woman, has had communion with God who has commanded her to become a warrior in battle for France, determines her damnation. It is fascinating, accordingly, to observe in Dreyer’s version that when Joan asks for communion, the judges choose gender as her test; she can participate in the mass only if she ceases to dress as a man! Her refusal only reinforces their misogyny: her very clothes, they declare, are abominable to God! “The arrogance of the woman is insane!” The shearing of her hair is their last assault against her female identity, as they transform her into an image of themselves upon whom they might lay their hands.

The terrifying scene of torture, however, shows no touch of human flesh, but is represented entirely in mechanistic images, a near perpetual spin of triangular-shaped devices, like a series of tiny Judas Cradles that presumably will be applied to her flesh.


By condensing Joan’s several meetings with clergy into one session and dividing the film basically into five parts—her trial, her test and mockery, her torture, her admission and recantation, and her burning—Dreyer creates an alternating pattern between encounters of the mind and the body, which he reiterates time and again in his thousands of friezes of either Joan in shifting positions with other men or Joan suffering alone, generally with the camera face-on. It is the latter, obviously, which becomes her fate, as she burns in the lonely torment of the fire. But even in that loneliness—an isolation that is simultaneously painful and beautiful to behold—Joan recognizes the inevitability of the patriarchal world in which she exists: her hope, after all, is to be “alone with God.”

Posted by greenintegerblog at 9:15 AM