Charles Laughton | The Night of the Hunter

love and hate
by Douglas Messerli

Charles Laughton's only film has often been described as a kind of multi-genre work, a horror story that is also a fantasy, a children's tale that contains adult criminals, a period piece that often seems timeless in its images and methods. It has also been described as a rather old-fashioned piece of film-making that is highly inventive and even, at times, experimental in its presentation of images. I think that quality, in particular, can be chalked up to Agee's script—which originally consisted of hundreds of pages until Laughton insisted the poet-writer winnow it down—that tells this story of a self-justifying villain and two children in terms of dualities.


Some of these are quite obvious. The central figure, Reverend Harry Powell (Robert Mitchum) pretends to be a man of God while he goes about the south marrying windows and killing them for their money (quite similarly to Hitchcock's beloved Charles Oakley in Shadow of a Doubt). Powell is clearly a kind schizophrenic, a man who is obviously attracted to women but simultaneously disgusted by them:


Even his hands are tattooed with an opposition that symbolizes the polarizations within the man:
love and hate, which he explains to curious strangers as an eternal battle between good and bad.
Powell is a sweet-talking, seemingly gentle man who underneath is surging with a violent hate. 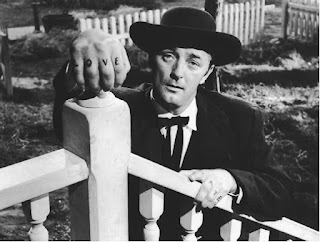 Similarly, the two Harper children, Pearl and John, react to Powell and his sudden intrusion in their lives quite differently. Pearl (Sally Jane Bruce) is attracted to the stranger, enchanted by him, while John (Billy Chapin) is terrified and rebellious. In part, of course, he recognizes that the "preacher" is attempting to get him to break his bond with his dead father by admitting that he knows where the father has hidden his stolen money. But he also knows that despite Powell's lie that Ben Harper had told him in the jail cell that he thrown the money into the river, that Powell is intent on finding the money through intimidation of the children.


Even the Spoons, in whose store Willa Harper (Shelley Winters) works, are of opposite minds regarding Powell. Mrs. Spoon (Evelyn Varden) sees a strong and good man, a perfect companion for the widow Willa, while Walt Spoon senses something is wrong about him.


The pattern continues, Willa becoming attracted to him at first seeks passion, but Powell rejects any sexual advances establishing the love-hate relationship he has with women further revealing the kind Jekyll and Hyde pulls he has within.


Laughton plays these dualities out in a number of ways in his images. The small river city of the Harper world is quite isolated, while at the same time larger river boats bearing people and goods pass within waving distance. Life seems rich and solid in this small-town world, the Spoons passing out sweet treats to its young citizens, while at the same time the movie presents time and again a world wherein children are homeless and hungry, a justification for Ben Harper's robbery:


When the children are forced to escape down river, like Huck Finn they leave civilization such as it is and move into a magic world overseen by owls, foxes, rabbits, and other animals, and the film, suddenly desolate of social forces, becomes magical and frightening at the same time. Throughout, Laughton plays with light and shadow, particularly in the barn scene where the children have temporarily stopped for the night to sleep. As the boy awakens, just before sunrise, the light is juxtaposed to the dark shadows of the barn at the very moment that the menacing preacher passes by (Laughton and his cinematographer captured the oddity of the moment, the sense of a children's tale and a dark adult world surrounding, by using a puppet instead of a real man).


The story overall presents a struggle between escape and discovery, endurance and passivity, innocence and knowledge, and, finally, life or death. A final showdown between forces is inevitable as the good and kind Rachel Cooper (Lillian Gish) faces off with the evil Powell. When Powell insists that he is John's father, John reacts "He's not my pa!" with Rachel chiming in, "No, and he ain't no preacher neither!" recognizing Satan as no one except the boy has. Despite her gentle ways, it is she who shoots him and calls the police, ultimately leading to the recognition that Powell is a serial killer who has killed the children's mother as well.


But even here, in the horror of the central character's actions, Laughton finds a kind of duality, in part just by casting Robert Mitchum in the role, whose breezy diffidence makes the character almost comic at times. Mitchum at this time in his life had apparently given up caring about acting and Hollywood in general, and in The Night of Hunter he seems at moments to almost be sleepwalking through the role—that is until (evidently carefully coached by Laughton) he suddenly comes vividly alive as a potential villain. Two scenes will represent the many instances of this dark reawakening in the movie:


Powell: [to Pearl] Now just tell me. Where's the money hid?
Pearl: But I swore I promised John I wouldn't tell.
Powell: John doesn't matter! Can't you get that through your
head, you poor, silly, disgusting little wretch.


The first line is spoken with great tenderness and patience, while Powell's follow up seethes with rage.


A short while later we see a similar transformation within a single line as the children plot their escape in the basement:


Powell: I can hear you whisperin' children, so I know you're
down there. I can feel myself gettin' awful mad. I'm out
of patience children. I'm coming now to find you. 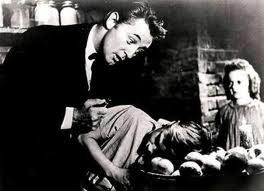 The growing intensity of these lines cannot help but remind one of Mitchum's remarkable acting in the later film, Cape Fear, where he played a similarly deranged figure threatening a family. 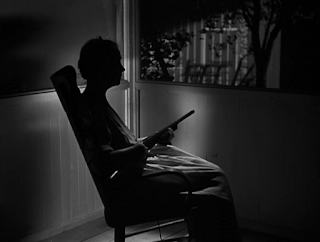 Finally, Laughton even demonstrates the flip side of the one thing that the young John Harper uses as a totem for his and his sister's survival: the memory of his father symbolized by the money hidden in Pearl's doll. Upon witnessing the police capture Powell, he is suddenly reminded of his father's capture, and in that encounter with the past the boy  realizes the evil that he himself has participated in by keeping the money. Springing forward, he comes to life—in a role in which he has been forced to primarily play a stubborn and quiet child—throwing the money across Powell's body as if the man might be saved by getting what he has so awfully desired. In the end, the children "abide and endure" because through their innocence they perceive the numerous contradictions of adult life.